Independence Day is a great time to appreciate our blessed country and reflect on all who have sacrificed their lives to help make it great! Here are some great books about our country. The first five are picture books and are good for all ages. Unless stated, the rest of the books are best suited for ages eight and up. 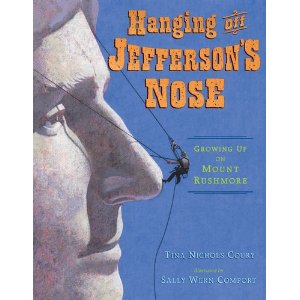 Hanging Off Jefferson’s Nose: Growing up on Mount Rushmore, by Tina Nichols Coury, and painted with full-page spreads by Sally Wern Comport, is an amazing non-fiction book about how this tremendous edifice was built. When the sculptor suddenly died three fourths of the way to completing it, his son (who miraculously and meticulously had followed his father through the many complex parts of making this monument) took over. This book is a wonderful celebration of these four great leaders of our nation. Be sure to check out the beginning end pages with the mountain before the famous faces were carved and the last end pages with all four presidents. 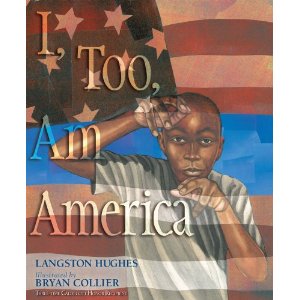 I, Too, Am America, based on one of Langston Hughes wonderful poems that centers around the African American, and richly painted by Bryan Collier, showcases the railroad porter who catered to the passengers throughout the train ride. Although Hughes didn’t center on porters when he wrote this famous poem, the illustrator took liberties to showcase how these skills were picked up and passed on in America to others. The illustrator’s note located in the back of the book discusses this also. 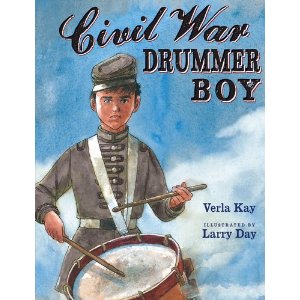 Civil War Drummer Boy, by Verla Kay, and capturing the images of this war with watercolor and gouache by Larry Day, is brief in the poetic text, yet powerful in message and image. Young boys, as young as nine, who joined their army to fight in the war were often assigned to be the drummer boy and help send messages by the beat of the drum. One little know fact is that there were instances recorded where both sides played instruments and enjoyed each other’s company a few nights during this war. Also, check out the Author’s Note in the front of the book. 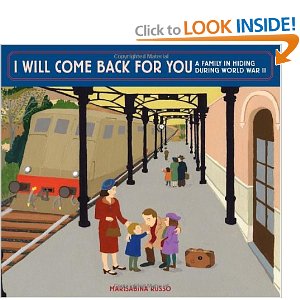 I Will Come Back For You: A Family in Hiding During World War II, by Marisabina Russo, is based on the author/illustrator’s young life growing up in Europe as a Jew prior and during World War II. Her parents fled Germany to live in Italy before Italy fell to the Nazi’s. But soon after, the Germans conquered Italy and Jewish families were at risk. The amazing story of how this family hid, and ultimately escaped to America, will make all who read it appreciate our democracy! There are actual photos of Russo’s family on the inside covers. There’s also a Glossary found in the front of the book.

Grace For President, by Kelly DiPucchio, and brightly painted by LeUyen Pham, has recently been reissued because we’re in an election year, and I’ve found no better book on the electoral process for kids than this book. Grace has just found out from her teacher that there hasn’t been a U. S. female president. As she sets out to become the female president in her school’s mock election, she learns about not only the electoral college but the value of hard work and not giving up in spite of great difficulties. 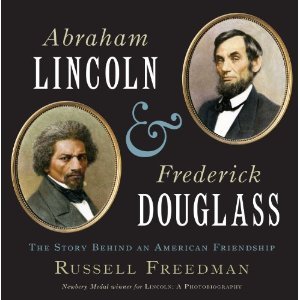 Abraham Lincoln & Frederick Douglass: The Story Behind an American Friendship, by a favorite non-fiction author, Russell Freedman, is a tremendously well researched and interesting account of how these two men led parallel lives until finally meeting during the most critical time of the Civil War. Both men were born poor and were self-taught. Both were veracious readers and insightful to truths and values. There are fascinating photos, drawings and charts found throughout the book. Every school, at every level, should have this book. This is best suited for ages 9 and up.

From Pie Town to Yum Yum: Weird and Wacky Place Names Across the United States, by Debbie Herman, and illustrated with pen and pencil by Linda Sarah Goldman, is a great geo-graphy book to learn names and locations in the U. S., but in an entertaining kind of way. As you will discover, most states have some really interesting and somewhat wacky city names. In this book you learn how each city was named along with a quick summary of each state. This book would be a perfect companion on a family road trip!

Ghosts in the Fog: The Untold Story of Alaska’s World War II Invasion, by Samantha Seiple, is a true account that few know about. During World War II, the Japanese invaded and occupied the Aleutian Islands off the coast of Alaska. This story is an interesting read and will surely keep readers turning the pages. There are photos and maps found sprinkled throughout the book. This is best suited for ages ten and up. 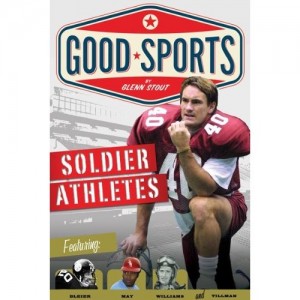 Good Sports: Soldier Athletes, by Glenn Stout, features four very brave and self sacrificing young men who left their chosen professional sport to serve their country. This book tells the stories of Ted Williams, the Boston Red Sox outfielder, who survived a plane crash while serving in Korea, Rocky Bleier, the Pittsburgh Steelers running back, who nearly lost his foot in Vietnam, Carlos May, the Chicago White Sox outfielder, who lost his thumb in a training accident in the National Guard and Pat Tillman, the Arizona Cardinals defensive back, who turned down a multimillion dollar contract to fight in Afghanistan and was later killed.