Lesson 25: "They Taught with Power and Authority of God" | Meridian Magazine 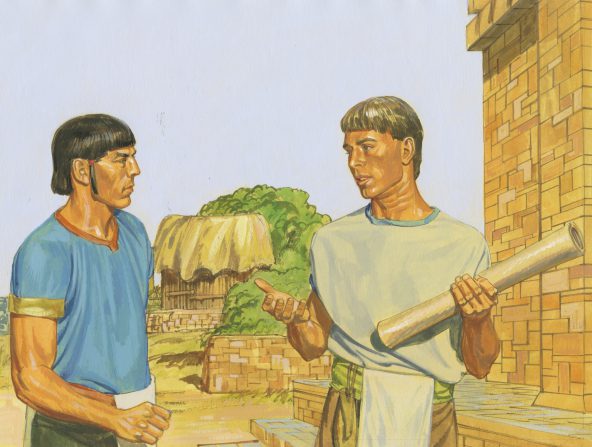 Lesson 25: “They Taught with Power and Authority of God”

The Lamanites were a constant scourge to the Nephites, an everlasting enemy, ferocious and wild in their hatred. They were a bloodthirsty people, and the blood they thirsted for was Nephite. Poised on the borders of the Nephite land, they were ever ready to pounce into war, for they had that most unfortunate of characteristics–a chip on their shoulders. Believing their fathers had been wronged in the wilderness and that their birthright and position had been stolen from them by the Nephites, they burned with resentment, and it flared easily into violence. Destroying Nephites was not just a hobby for them, but a calling which they gladly accepted. What were the Nephites to do about their sworn enemies? What does anyone do in the face of an enemy?

The response of the natural man is to destroy an enemy, but these chapters in Alma teach us something profound about God’s way of meeting those who would despitefully use us.

Choosing to Preach to the Lamanites

Surely the last place you would want to go as a missionary is among this violent and hateful people. Sending a son among them while you sat white-knuckled in worry at home would be even worse. Mosiah knew those nagging concerns, and sought the Lord about the safety of his children until he received this assurance. “Let them go up, for many shall believe on their words, and they shall have eternal life; and I will deliver thy sons out of the hands of the Lamanites (Mosiah 28:7).

This assurance did not mean that the sons of Mosiah would know ease and comfort on this mission. These men, who would have been kings in their own land, suffered every deprivation and persecution because of their commitment to God. Those who were imprisoned in Middoni, for instance, “were naked, and their skins were worn exceedingly because of being bound with strong cords. And they also had suffered hunger, thirst, and all kinds of afflictions” (Alma 20:29). Some days must have been grueling, frightening, yet what price is too great to pay to come to know God? They were urged on not just for the ultimate reward of being in the kingdom of God someday, but by the Spirit that dwelt in them here and now. The truly and deeply converted are urged with a power from within to share the sweetness of the gospel. They tremble to think of any soul being lost. Like those who partook of the fruit of the tree of life and then immediately looked to share it with others, so do those who have felt the embracing love of the Savior yearn to bring others into his arms.

In the beginning of Chapter 17, Alma was on the road to Gideon when he met his old and dear friends, the sons of Mosiah. The chapters that follow, detailing their missions, are flashbacks from this point. What made Alma rejoice exceedingly was that his friends were “still brethren in the Lord.” They had been the ultimately successful missionaries by following a true course, that is searching the scriptures “diligently that they might know the word of God.” A missionary cannot preach what he has not yet obtained for himself. “But this is not all: they had given themselves to much prayer, and fasting; therefore they had the spirit of prophecy and the spirit of revelation, and when they taught, they taught with the power and authority of God (Alma 17:3).

Here we see again what becomes a recurring theme in these chapters. There is a price to pay if one wants to fervently know God. These missionaries preached with power and authority because they were willing to pray the price of fasting and study–and not just a little, but there is this telling word in this scripture “much prayer and fasting.” We can say the correct words, even teach true concepts, but to preach with power and authority demands a price.

Sons of Mosiah Begin Their Missions

Amazingly, once the sons of Mosiah reached the land of the Lamanites, they separated, some going their own ways to preach. Ammon, for instance, would not have the comfort of his own brethren as he ventured into Lamoni’s territory. He would face the “wild and hardened and a ferocious people” with only the help of God. That, of course, was all he needed. God and any one person is a majority.

What Ammon chooses to do first has become the pattern for the missionaries of the latter-days. He enters the land of Ishmael, and when brought before the king, all he asks to do is become his servant. Imagine the heir to the throne of the Nephites volunteering to become a servant in the household of a Lamanite king. What is this remarkable Spirit of God which vanquishes in us that carnal need for self-importance and position? We cannot teach people if we are trying to prove our superior knowledge, only if we develop trusting relationships and approach them from the impulse to serve.

In the events which follow, Ammon teaches us a critical lesson about how to handle our enemies. We love them–that most difficult and stretching of spiritual requests. Ammon is clearly one of the mightiest warriors of the Book of Mormon, a swashbuckler who leads those who are driving away the king’s flocks at the waters of Sebus into a “disarming” experience. Yet, he knows that the only way to beat an enemy is to win his heart to God’s cause. What astounds Lamoni when he hears about the marvelous act of protection Ammon has performed for the king’s servants and flocks is not only the strength of the man. It is that instead of riding home uplifted in the arms of honor, Ammon simply goes back to is duty tending the horses. Who is this man? His actions are a testimony before he opens his mouth.

At first, from the fountain of his superstitious beliefs, Lamoni believed that Ammon was the Great Spirit. “Who art thou?” Lamoni asked, “Art thou that Great Spirit, who knows all things? (Alma 18:18). Again Ammon responds with insight. Instead of belittling or trivializing the king’s limited understanding, Ammon started where he was. “Believeth thou that there is a Great Spirit? And he said, Yea. And Ammon said: This is God (Alma 18:28). Those who would be taught the gospel, must begin at their own point of understanding. Once Ammon had found common ground between them, he began his teachings at the most basic level, starting back with the creation, and the fall of man. This is the foundation that sets up the understanding of the need for a Savior. All else flows from here.

Thus we see that Ammon has set the course for what a missionary should be:

1. He diligently studied the word of God.

2. He fasted and prayed.

3. He was led by the Spirit and therefore fear was replaced by confidence.

5.He served those he would teach.

6. He spoke to them in a way they understood.

7. He stood for something and therefore stood his ground.

What We Would Give

What would you give to know the Lord? What price would you willingly pay to be drawn to him? Ammon’s interactions with Lamoni’s father clarify these questions. As Ammon and Lamoni are journeying, Lamoni’s father comes upon them. He is angry that Lamoni has missed the feast and that is enlarged to vitriol when he learns why. This Ammon, this son of a Nephite, has detained Lamoni, and what’s worse to this enflamed father, Lamoni has come to believe Ammon’s words. Lamoni’s father raises his sword first to slay his own son, and then to slay Ammon. That he would consider killing his own flesh and blood gives us a measure of the depth of depravity of his heart. But when he went to slay Ammon, he was up against more than a match.

As the tide of the fight turned against the Lamanite king, and he could see that Ammon could slay him, he began to plead for his life with these words, “If thou wilt spare me I will grant unto thee whatsoever thou wilt ask, even to half of the kingdom” (Alma 20:32). With his life on the line, he was willing to give up half of his material possessions and position.

Contrast this with what he says later. Aaron preaches to him, paints for him an understanding of the joys of eternal life. When Lamoni’s father tastes even a hint of this joy, when his soul begins to feel that pleasing expansion, he begs for something he wants even more than he wanted his life to be spared when threatened with Ammon’s sword. He asks Aaron yearningly, “What shall I do that I may have this eternal life of which thou hast spoken? Yea what shall I do that I may be born of God, having this wicked spirit rooted out of my breast, and receive his Spirit, that I may be filled with joy, that I may not be cast off at the last day? Behold, said he, I will give up all that I possess, yea, I will forsake my kingdom, that I may receive this great joy” (Alma 22:15). This is a man transformed. The wicked old materialist who was frightened for his life was willing to give up half of his kingdom to save it. But now, beginning to be awakened to the Spirit, he would give up all to possess eternal life. Here is another lesson in the price of things. Eternal life has its costs and it is well worth it. Its deliciousness is worth what we must pay for it.

What a beautiful way of presenting this dilemma we are facing today as did Ammon with the fear of the enemy presenting with ISIS interspersed with the refugees. This is a crisis in our country as well as other countries. Have been praying about this. Thank you your very in tune message. You are a beautiful, gifted Sister, Thank you!!

Great article, thanks for the insight.