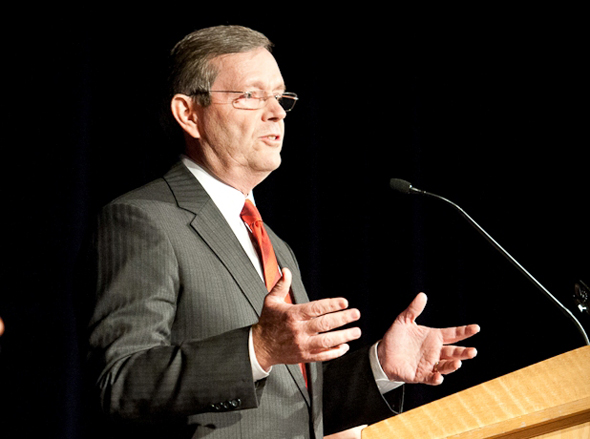 Make no mistake about it. Those who would like to shrink religious freedom and marginalize churches are on the move. Just last week, for instance, the Secular Coalition of America, a lobbying organization who want “a strong separation of religion and government” sent an announcement that they will be launching chapters in 48 states as well as Washington D.C. and Puerto Rico by the end of 2012.

In the name of “inclusion” or other lofty-sounding aims, law suits continually challenge religious symbols and expression, seeking to strip them from the public square or force churches into activities, like the HHS mandates, that violate their own teachings.

In general, there is a growing sense that religion has to prove its worth, that churches are somehow on the line or that the special place they’ve held for 225 years of American history should now be lost.

It will take a chorus, not a solo of churches working together to defend a right that has always been taken for granted in America-religious freedom-and the American Religious Freedom project, supported by a wide number of churches, is moving to do that.

Tim Schultz, the State Legislative Policy Director, of the project, announced that they will be working together to build religious freedom caucuses, beginning in a dozen states including Arizona, Colorado, Pennsylvania, Florida, Virginia, Kentucky, Delaware, Idaho, Kansas, Tennessee, and Utah.

By the end of 2012, they hope to have 25 such caucuses and intend to have all fifty states organized by the end of 2013. The aim is working on the state level and “the good news,” according to Schultz, “is that the American people still believe that this is a core American value that is still to be defended.”

The project hopes to give state legislators expertise in religious freedom issues, train and equip them in a sophisticated manner, provide model legislation and understanding of how political battles have played out in other states.

In fact, 24 state legislators attended the conference, a key group who will help the process moving forward.

Michael Leavitt, former Secretary, U.S. Department of Health and Human Services and former governor of Utah, spoke at the conference and is a consultant to the group. He said that in addition to the legislative caucuses, the goal is to organize a network in each state of advocates for religious freedom to include faith organizations, think-tanks, and other non-profit organizations who see this as being important.

“The networks will include members from both parties and from many denominations.”

“We will not relent to those who would like to make this a partisan issue,” said Shultz. “It is a core American issue.” He said, “This is not about us, but about protecting this great treasure to make sure it is still available to Americans for generations to come.”

Leavitt said, “These attacks on religious freedom, carried to an extreme, begin to undermine the capacity of churches to carry out their role in society.”

Leavitt said of this organizing effort, “We are at the beginning of an issue that is increasing in prominence and we need to assure that there are voices on both sides. If people of faith do not become activists to protect it, religious freedom will atrophy and their voice will be overcome by those who feel otherwise.”

The role of this new organization will be to sound the alarm, to monitor situations where religious freedom could be undermined and to motivate activism to prevent it. It will have to be a long, patient commitment, not just the response to the crisis of the moment. The fight for religious freedom will also have to go beyond government, but call for a new awareness and understanding throughout the population that has been gradually numbed to the danger.

Leavitt said, he first became aware how threatened religious freedom was as Secretary of Health and Human Services. A couple of professional organizations were requiring physicians to perform procedures that violated their conscience in order to be accredited. He said, “I knew that it was against the federal law, so I challenged it. As time has gone on I’ve seen it more and more as professional organizations take position that make it difficult for people to practice their religious views and play out their conscience that is consistent with sound constitutional principle.”

Under Leavitt, the HHS, issued conscience protection clauses which were then reversed when President Obama took office.

Leavitt said, “Part of the debate about what the role of religion should be in society. Some argue that religion has no special place in American society. We disagree. It has always had a special place and the burden of proof is on them.

“Critics say that religion is just fine as long as plays out privately. It has no place in the public square. If policy is made that comes out of religious views, they say they are having religious views imposed on them. We disagree. We think that religion is a legitimate and important voice in the public square and attempts to restrict it are misplaced.”

What can a citizen do to help defend religious freedom? Leavitt said that as the American Religious Freedom project helps to educate people about this worry, citizens can follow it at www.religiousfreedom.org. He said people should harness the power of the social network to alert others on facebook, twitter and blogs.

He said that people need to “understand that religious freedom is under attack. Be mindful of it. Watch for examples in their school board, legislature and professional organizations and be active as advocates.

“When we hear that people who form their views on the basis of their religion are not welcome in the public square, we have to understand that we cannot be inhibited in letting our views be known when they are formed by religious convictions.

“There are a whole series of competing values that are being used in the schools. In societies like this, democratic processes decide what the norm is. If one side activates and agitates, then society begins to define the issue that way. People have to understand what a job this is to defend a value we’ve always taken for granted.

“Sometimes these changes are subtle, but the vibrations expand out like ripples on a pond.

“There are very few things that government has more obligation to do than to protect conscience.

Leavitt said of this new project, “This is about the faith community recognizing that we may have different doctrines and different views about theology, but we are united in our view that religious freedom is crucial to the American way of life.”