The Best-Kept Secret in the Church | Meridian Magazine

The Best-Kept Secret in the Church

Photos are by Scot Facer Proctor

Between the announcement of a temple and its dedication, there is a long and sometimes rugged process. In some cases, protests arise from those who will be neighbors. They don’t like the height of the spire or the light on the building. Some may simply resent the Church with some prejudice that influences their outlook.

If there is any place you might expect to see protest, it could be Kansas City, Missouri, the place where a century-and-a-half ago, Latter-day Saints were driven from the state at the hands of those who simply couldn’t tolerate their new religion and way of life.

Yet Kansas City defied those expectations. The state, where once Latter-day Saints tried to build a temple in Independence and Far West only to face defeat and disappointment, supported the temple’s construction with ease. Then, if that wasn’t enough of a generous welcome, more than 90,000 people visited the open house. 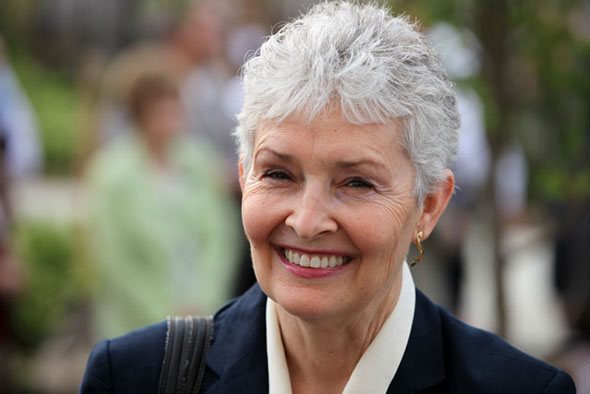 Janeen Aggen, multi-stake media specialist said, “Some of the brethren observed that they had never seen a temple outside of the intermountain area go through the local government’s approval processes as quickly and easily as this one did.”

This didn’t just happen. It is the product of years of effort by local public affairs directors who sought to be friends with the people in their community in a concerted, orchestrated effort.

How Public Affairs Paved the Way for a Temple

Public affair is sometimes an underrated calling on the ward or stake level. Janeen said, “So many say, what is this strange beast that nobody has heard about?” The importance of local public affairs work may just be the best-kept secret in the Church.

As Nancy Gould said she didn’t know what it meant when she was called to be a member of her stake’s public affairs committee, but soon her awareness expanded. She’s been involved in her community as a member, and then secretary, of the Interfaith Ministerial Council for years. 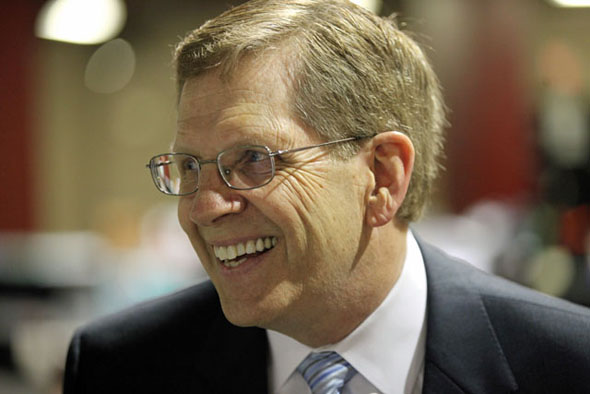 In Kansas City, the public affairs committee started laying the groundwork for a temple beginning in 1996. Elder Donald D. Deshler of the Seventy said that the successful building of the temple and its well-attended open house was the end of a 16-year effort. “We hope that the many who came was in relation to some of the efforts that our various stakes have been working on for all those years,” he said.

They began, all those years ago by writing Church leaders in their surrounding states that already had temples and asking, “If you could do it again, what would you do differently with the temple building and open house? What worked for you in rallying the community behind the Church and forming friendships?”

Those temples that had little protest and whose open houses were widely supported had done their ground work with the community. They had identified opinion leaders in their community and cultivated relationships with them.

Janeen Aggen said “We planned everything we did in public affairs with an eye to bringing the church out of obscurity and preparing the community, the leaders, and the other churches for the day we would have a temple. We hoped to go seamlessly into an open house, and those who would come would feel the Spirit.” 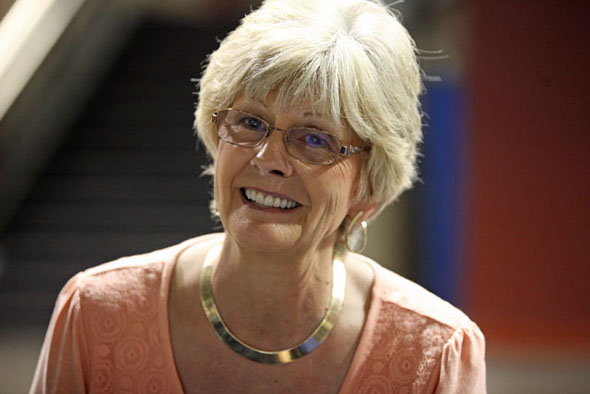 Carol Deshler said, “We just wanted to become friends with those in our community, and we tried to establish relationships in that way. There is something that is special about the people in the Midwest that makes them very receptive and responsive to the values we adhere to. They live those values. They have been such great supporters and friends of us. We feel very blessed to be in this larger community here.”

One of public affairs’ more recent efforts was gathering with other churches in the area to brainstorm on what they could do together. They came up with the idea of creating a “Better Together” benefit concert where seven different churches would each contribute a choir to sing and then they would all sing one song together. The song they learned for their joint number was “Because I Have Been Given Much.” The ticket for entrance was a bag of groceries that was given to the county food pantry.

All the leaders of the various churches joined together for a picture with the mayor, and after the first year, two city councilmen and the chief of police wanted to join the group for the next year. 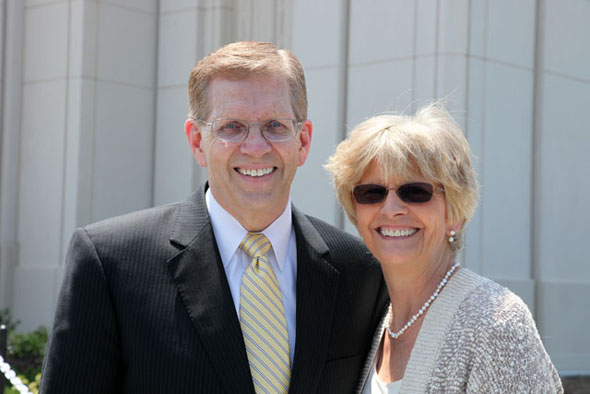 Another opportunity to invite the community was when the Mormon Tabernacle Choir came in 2009. The Deshlers personally invited 50 people and 42 of them came. “It was great to see how the choir can touch the hearts of people, and those who were invited were glad to come to the VIP reception.”

The local LDS public affairs team was creative in dreaming up their outreach. They had Stephen R. Covey come to present a seminar. They organized a Keystone Speaker’s Bureau and made members, who had special areas of expertise, available as speakers to local community groups. To date the Keystone bureau has presented 315 programs to more than 11,000 people, with one of the more recent speeches to the Gladstone Rotary Club on “Making the Best of Times in the Worst of Times.”

Janeen Aggen said, “Because we have the vision and understanding of public affairs in our stake presidents and with Elder Deshler, we have incredible people called to public affairs. You need the best people for this calling-so we have the cream of the crop who are very dedicated in their testimonies and can initiate ideas on their own. I can’t tell you how many times I’ve been awakened in the middle of the night with solutions to challenges we have faced.”

“It is so much better if you have friends who can stand up and represent you when you have something like a temple coming to your area. We are in the area where Alexander Doniphan stood up for the Church. Someone else speaking for you may have more credibility than we can ever give ourselves.”

To be effective, the public affairs committee does intense training with those who are called. They canvas other areas for ideas, and most of all they help cultivate a sense of outreach in the members in their area. 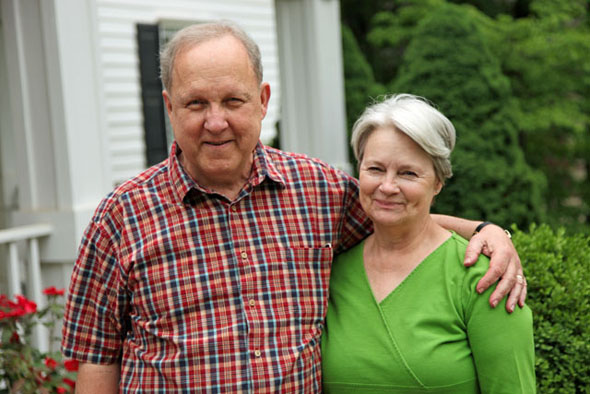 Rodger and Rean Duncan have been masters of outreach, regularly hosting events in their home for ministers and other community leaders in Liberty, Missouri where they live-just a few blocks from the infamous and historic Liberty Jail. Because of this they have developed rich friendships all over their area. Rodger noted that one friend was confronted by someone claiming that Mormons aren’t Christians. “I know that’s not true,” their friend answered, “because I’ve been in the Duncan’s home at Christmas, and they worship Christ and everything about their house and this gathering spoke of him.

This was a potent answer that mitigated the challenger’s false claims.

It is impossible to overestimate the power of reaching beyond our own LDS community to be friends. Rachel Sanford, who spent nearly every day as a guide at the Kansas City Temple during the open house said, “I discovered in talking to other Latter-day Saints as they approached doing tours, they were unnerved. They asked, what kind of questions are we going to get and can I handle it?’

“I had a different take on it,” she said. I thought This is a great way to make new friends and that outlook made me relax.’ I’ve had so many religious conversations with other Moms in town and there were a lot of misconceptions. For me, the temple open house was a chance to tell them what we are all about. If they join, great. If they don’t, great. What people could say is I can tell you are really excited about this temple.'”

Rachel said, “There was one tour in particular, I could watch the facial expressions of the people relax, and their bodies relax as they went through the tour. Their ideas were changing about who we are.

I could almost see the wheels turning in one man’s mind, but I didn’t know what was behind it. It was almost as if he had a mental list and he was going down it. It was as if he was going down this list of fundamental Christian ideals and thinking, what I’ve been told about these people doesn’t match up with what I’m hearing. I will never forget that man-to come so anxious and leave so peaceful and happy at the end.”

Rachel said, “One mother in a wheel chair came through with her daughter. She said, I felt some things here that I’ve never felt anywhere.’ Her daughter said, Wow, it really makes you wonder when you feel what you feel in a place like this and see all these people so excited about it and they are obviously good people.'”

Rachel took some Catholic women through the temple who didn’t necessarily want to leave Catholicism, but they said, “This makes sense. I get this.”

Rachel had one longtime friend who she had tried to have a religious conversation with for years. Her husband is very open, but the wife not so much. She called to invite them and expected her to say, We have a lot going on right now,’ but instead he answered the phone and said, We’d love to come.’ He got on the temple website during the conversation. He called back 20 minutes later because he was so eager and asked, Can my parents come too? Can my nephew come, too?’

“He was curious and had great questions,” she said. “I don’t know that the effect is that they are going to join the Church any time soon, but I think he came away with greater understanding.” Rachel mentioned the Savior in some context in every single room. “You could not leave my tours and wonder who the Savior is to us.”

It is not just a temple dedication that is an opportunity for the friendshipping’ and outreach that constitutes public affairs. Those who have caught the vision in their area make an enormous difference for the Church. Just as a groundbreaking for a temple is an act of faith, so is the leadership and vision that animates public affairs.

Public affairs demands devotion and creativity and where it operates effectively can make all the difference for the Church.

I share this article every time a new director of public affairs is called in the North America Southeast area. Thanks for the insight into this unique calling.