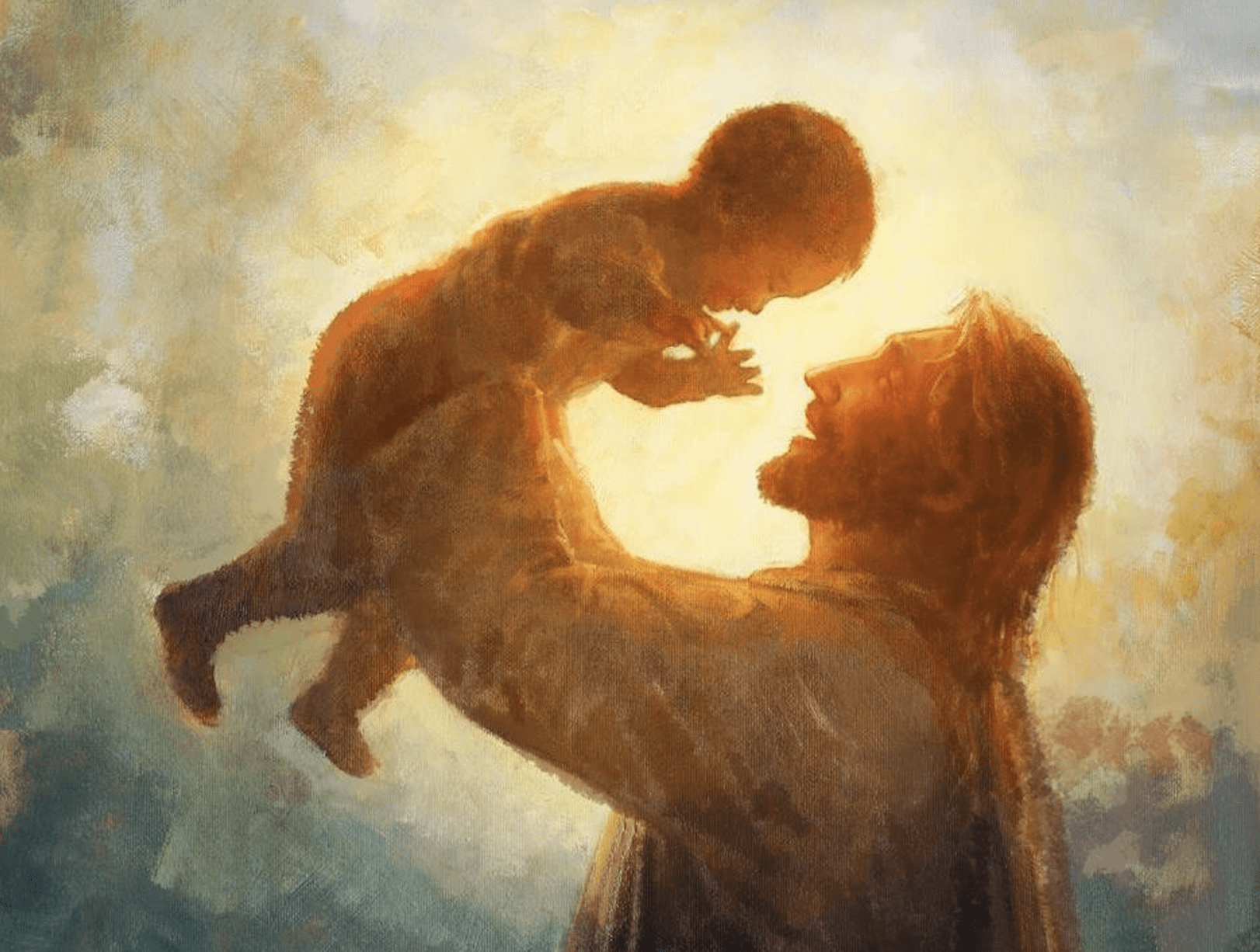 For those who know Jesus Christ and His ways, we know that His kindness is paramount.  Children often experience this force of love that only He can give.  To them, it comes as naturally as a sunrise.  I’d like to share three profound experiences where children have witnessed that amazing love first hand…

One of the cherished spiritual experiences in our family concerns the time that my barely 2-year-old son saw and spoke with Jesus.

I had been ill, and was lying on my bed. Danny was playing with Legos at the side of my bed, building a simple little “boat.”

Suddenly, and without any warning, he excitedly exclaimed,

He then ran across my room to the window, eagerly pulling back the blinds and with great exhilaration repeated,

In a few seconds, he was back near me, his eyes gazing at the foot of my bed, and then moving upwards.

I was dumbfounded, not knowing what to say, because I couldn’t see or feel anything. I asked,

“Danny, can you see Jesus?”

He nodded reverently!  There were a few seconds of silence as Danny stared upwards in awe.  During those seconds, Danny’s eyes followed something moving a few feet away through a doorway and into the adjoining room.

I managed to say,

He picked up his project, walked to that spot in the adjoining room, and proudly presented his boat to an unseen being.  With shyness mixed with joy, he ran back to me giggling,

Seconds later he went back there and talked some more. I don’t remember what he said next, except that he continued chattering with two-year old vocabulary while he was looking up at someone.  I could of course only hear his side of the conversation, but I knew that he couldn’t be making it up.

After a few minutes, that sweet conversation was over and Danny resumed playing normally, but I lay there absolutely astonished at what I had witnessed.

For the next two days, I tried to pump Danny with questions about Jesus.  He indicated how important it was to him, but he couldn’t communicate very well at age 2, and I couldn’t get much more information from him, because he just didn’t know the words to express his experience.

On the 3rd day, however, out of the blue, Danny said to me,

I’ve often pondered on why Jesus came to my little Danny, but I’m always amazed that the Lord would take time to look at a little Lego boat and talk to a two-year old.

Nancy Farrer, a long-time family friend, shared a magnificent experience she and her little daughter had with Jesus 27 years ago:

“Clarke and I wanted 5 children, and when I became pregnant with number five, I remember telling him, ‘this is it, our family is complete.’  The pregnancy was uneventful until I went in for my first checkup appointment at about 12 weeks. The doctor discovered that I was carrying twins.  We were thrilled!

“By the time I was 20+ weeks, I was the size I would have been if I was full term with one.  I remember vividly thinking something was not right. I had felt some flutters of them moving inside me but I felt uneasy.

“At my next appointment the doctor listened for a heartbeat; any heartbeat, but there wasn’t one. He gave us the choice of a spontaneous abortion or to induce labor and deliver.  I chose the latter.”

“The next morning, I left the hospital with empty arms and later, my breasts full of milk. I could hear babies crying. I could hardly stand it. I became very depressed.”

“One morning, shortly after the birth, my little girl Amanda (3 years old)     came into our room and told me she had a dream.  She dreamt that she was climbing a tall ladder.  As she reached the top, she saw that Jesus was there.  He was holding both of our babies on His lap!

“Her dream was SO profound to me. I knew that the Savior was keenly aware of our loss. “

“After several months I knelt and asked my Heavenly Father if I was ever going to have another baby. I was alone and I prayed out loud. The warm feeling, they talk about in the scriptures, happened. It was like my soul was being coated from the crown of my head to the tips of my toes with a power/warmth I had never felt before. The darkness I had felt left me. I KNEW we would be blessed again.  It took 9 months total time, but we were blessed again with another little girl.”[i]

What Does Jesus Say?

Emily Belle Freeman wrote a beautiful account of her friend’s experience.  She wrote:

“Every so often, the whole sky comes crashing down. That was the case recently for a dear friend of mine who unexpectedly found out that his 2-year-old daughter, Hope, had cancer.”

“Somewhere in the middle of chemotherapy and hospital stays and IV tubes, my friend and his daughter had a conversation familiar to everyone who has raised a young child. In his silliest voice, he asked:

‘What does the owl say?’

She giggled sweetly…My friend turned the page and asked,

‘What does the cow say?’

Hope responded proudly and grinned from ear to ear…

“My friend looked up to read the next line, and suddenly the conversation took an unexpected turn. At that moment, a picture of Jesus on Hope’s bedroom wall caught his attention, and he asked an unplanned question:

‘Hopie,’ he stammered, trying not to give away his emotion,

‘What does Jesus say?’

It was a question he had never asked her before.

“As he waited with anticipation, Hope snuggled into his shoulder, opened wide her big blue eyes, and whispered,

As we can see Jesus lends his embrace to children and their parents.

“I Feel Him All the Time”

Recently I asked my then 6-year-old grandson Helaman, if he ever felt Jesus.  He just casually said,

Somehow Jesus makes time to be with Helaman, inspect a Lego boat, deeply change a 3-year-old and her mother forever, and “hold” a 2- year-old with cancer.  We don’t know how He does it, but He does it, and blesses countless lives of children.

So Natural Yet So Powerful

Interaction with Jesus is so natural to many of the young ones around us that it is like the air they breathe.  We need to breathe more of that trusting, love-filled air.  No wonder the scriptures tell us to become more like children, …“for of such is the kingdom of God.”[iii]

When my daughter was about 3 years old we had just finished an addition to our home. She would now have her own bedroom instead of sharing one with a sibling. Now in her own room, night after night she would wake up scared at now being alone. She would come into our room and wake me up saying, "Mommy I am scared." I would take her back into her room and say a prayer with her that she would feel safe and sleep well. This went on for weeks. Then one morning I realized that the night before she hadn't woken up scared. I said, "Wow, you didn't wake up last night. I am so proud of you staying in your room." She just casually as could be responded, "I woke up and I was scared last night. I just said my own prayer and then Jesus came and gave me a hug. Jesus protected me and made me feel safe." I was so struck by her comment I didn't know what to say for a moment. I paused, and then asked her, "What did he look like?" She said, "He was dressed in white and had white hair and blue eyes." That gave me tingles. I knew that what she said was true. Jesus had come to her last night. He had given her a hug and made her feel safe. We had never talked to her or shown her pictures of Jesus with white hair. But in the scriptures the resurrected Jesus is described as having white hair and brilliant blue eyes. In the temple Jesus is also shown this way. I knew that the only way she could know this is that she did actually see him. It touched my heart so much. Jesus loves his little ones so dearly that he will come to them to bring comfort.

I’m diabetic and unfortunately had my two children in the car with me when I drove off the road with low blood sugar. An ambulance took me to the hospital and a friend driving behind me on the road took my children with her to the hospital. Later, my 3 year old son, Garrett, said to me: “Mom I did just what Jesus told me to do”. When I asked him what Jesus said, he told me: “Jesus told met to stand right next to the car and stay off the road”. How could I doubt my son? Jesus was there to make sure our children were safe!