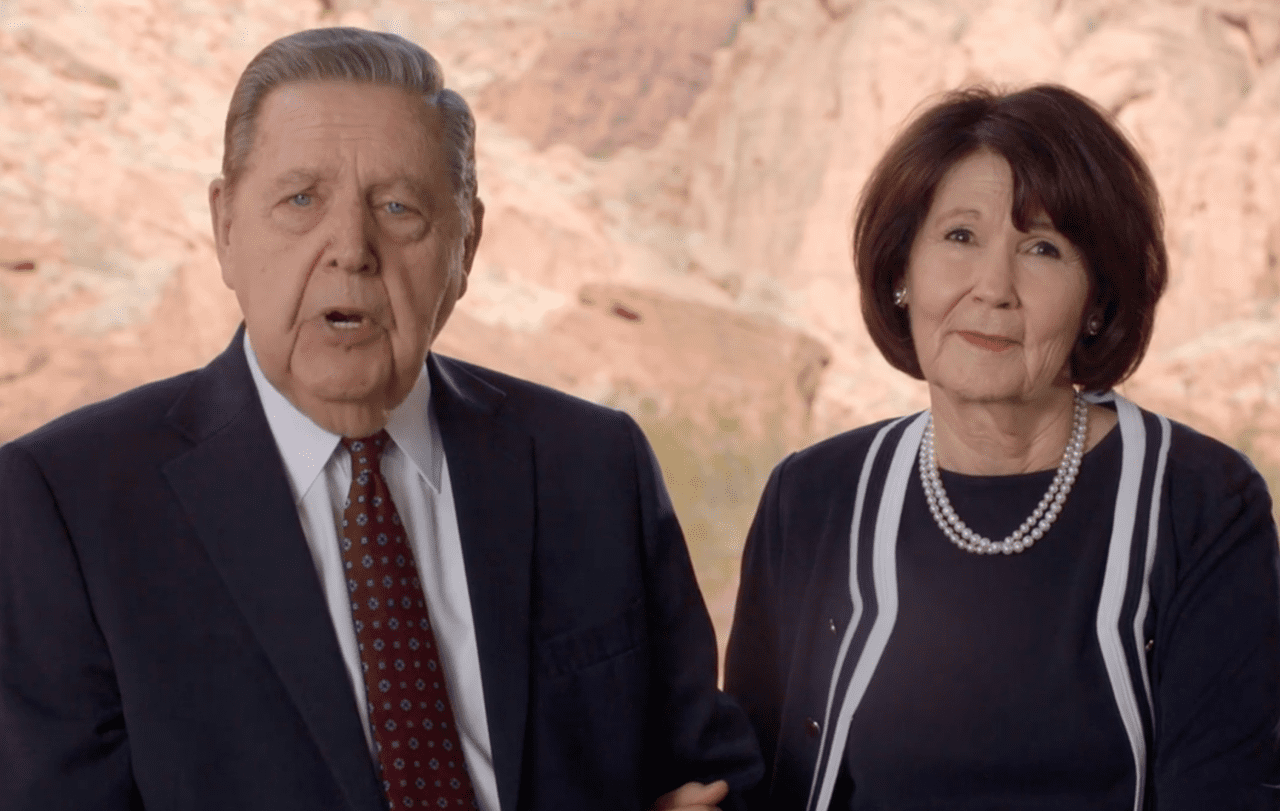 To add some inner light to what for many is a bleak mid-winter, you must see the Family Discovery Day presentation of Elder Jeffrey R. Holland and his wife Pat as they take their three children back to St. George, where they grew up, to remember and connect.

Available at this link, and with the warmth and insight that the Hollands always give, the film reminds us how much it matters to connect to each other and the scenes and places that form the backdrops of our lives.

As viewers, we travel with the Hollands to “this little corner of heaven on earth” that is their home in the red rock regions of southwest Utah. We visit Sister Holland’s home, where her father pronounced young Jeff “a knothead” because he parked in their driveway when her Dad was trying to get in or out. We see the school where they met when Sister Holland moved in from Enterprise, Utah as a ninth grader.

Elder Holland remembers himself as being shy, to which Sister Holland interrupts, “You were never shy.  I remember I had been here only a few months when I wrote a letter back to my cousin who lived in Enterprise. ‘I met this boy named Jeff Holland, and he’s the most overly confident, obnoxious person I’ve ever met and I don’t like him at all, but I have this deep feeling some day, I’m going to marry him.’

Their stories evoke laughter and tenderness, but mostly a sense of how sacred life’s moments are.

Sister Holland told the story of how her ancestors joined the Church and emigrated from lush, green Interlaken, Switzerland to the rugged, barren, arid desert where Enterprise was established and where there was hardly a tree of any kind. She asked, “Can you imagine their disappointment?” But her great grandmother decided to do something about it.

Sister Holland said, ”She planted a little row of fir trees around their little church meeting house, and every day she carried by hand several buckets of water to nourish and encourage those little trees. My mother was then just a little girl on that daily journey. One day, a well-meaning neighbor said to my great grandmother, ‘Bertha, why do you waste your time carrying water to those trees? They will never amount to anything. Certainly you will never live to see them grow at all.’ My grandmother turned on this neighbor and with all five feet of her height said, ‘Maybe I won’t live to see them grow, but this little girl will, and she pointed to my mother. Well, my mother did live to see them grow and so did I. I went to church, played with my friends, and had picnics with my family under the shade of those beautiful trees my great grandmother had planted and watered. Now my children and grandchildren have played and had picnics under those same trees.”

These stories that bind us, she said, must not be forgotten.

Elder and Sister Holland’s children, who joined them on this journey remember moments when their parents’ teachings penetrated their hearts. David Holland remembers driving past the refineries on I-15 when his Dad turned to him and said, “Read us a scripture. I think we could both use it. There was a little soft cover, blue edition of the Book of Mormon in the pocket of the car door as there always seemed to be. I reached down and picked it up and opened to the book of Enos about fathers and sons and legacies of faith and coming to understand God’s promise. I opened up to verse 12, and it said God would answer our prayers because we prayed in faith.

Speaking of his father, David said, “I remember that you felt an answer to your prayer in that moment and I felt an answer to my prayer, and we were functioning at such different levels. You were worried about global things, important things. I was trying to make a sophomore football team, but to our Heavenly Father, those prayers were of equal weight. He cared about both of us at that place where we were. Your commitment encouraged me to seek the Lord’s counsel in scripture and to believe in answered prayers wherever we are in our journey of maturation and faith, that the Lord was there to hear us. That moment in that car passing that refinery has been an anchor point to me for the rest of my life.”

Elder Holland takes us to the St. George tabernacle where he went to church for the first twelve years of his life. He remembers being a nervous deacon on the front row just before he passed the sacrament for the first time and being a newly-returned missionary from England called to the stand in stake conference to share his testimony. “So much of who I am and what I cherish has to do with this place,” he said.

Sister Holland said, “We are missing the mark if when we tap into our family roots, we fail to recognize our divine roots, our foundation and our connection to our father in heaven. He loves us. He worries about us and He hopes we will listen to the counsel He wishes to give us. Bonds, ties, connections, eternity. I love thinking that my husband and I and our children are safe in Heavenly Father’s arms forever, off we keep His commandments and truly desire that blessing.

Elder Holland added, “Here’s another promise. I promise that the closer you get to God, the more you will want to be with Him and to be like Him. That will include understanding His love and His greatest desire, namely to bring to pass the immortality and eternal life of all His children. That great work of exaltation can also be our work, and speaking specifically of family history and temple experience, the more we engage in gathering all of God’s children on both sides of the veil, the closer we get to God.”

Watch this presentation, and your desire to connect with your family and with God will be enhanced. You’ll be glad you did.

On one hand, this is sweet and delightful to watch. On the other, it's hard and sad to watch, because people like me have no "home." My parents were immigrants and I've never been to their home towns, which were bombed into oblivion during WWII. My husband and I have had to move around so much for work and family needs that six states in this country have been "home" yet none of them feel like it. We wander, without roots, wishing we had places to take our children back to yet having no place, then also again realizing it was God who sent us wandering and has assured us, "Wherever you worship me shall be your home."