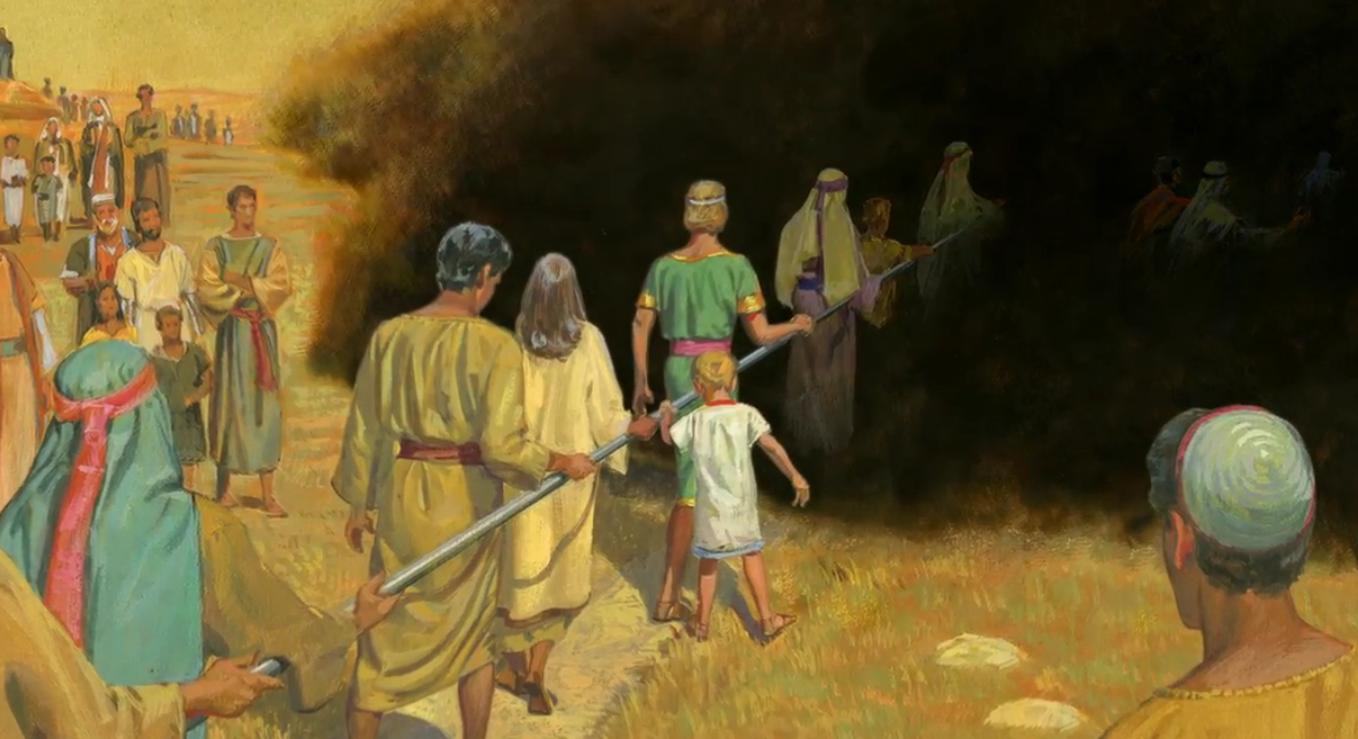 Why We Need the Iron Rod Now More Than Ever

Why was the rod Lehi and Nephi saw in vision made of iron? Why not rubber or Styrofoam or licorice? What does the Lord mean to convey to us with the concept of an iron rod?

I drove around the neighborhood a few years ago, looking at rods—that is, fences and barriers and railings. I found a few made of vinyl, but the majority were made of metal: steel or iron. All of them but one were sturdy and reliable, and they ought to be, since their purpose is protection and direction.

Nephi tells us that the iron rod is the word of God (1 Nephi 15:24) and then makes a remarkable promise: “whoso would hearken unto the word of God, and would hold fast unto it, they would never perish; neither could the temptations and the fiery darts of the adversary overpower them unto blindness, to lead them away to destruction.”

Protection and direction indeed! Clinging to a rubber rod does not seem very productive. How grateful we ought to be that the rod is iron, inflexible and immovable. The rod will not follow us. It cannot. We must follow the rod and “hold fast unto it.” It defines the way to safety and keeps us on the path as we make our way through the mists of darkness that confound so many in mortality.

Nephi tells us about the original nature of the rod, the word of God, in 1 Nephi 14:23. He is speaking of the Bible, which for several thousand years was the only scripture available. He taught that:

“at the time the book proceeded out of the mouth of the Jew, the things which were written were plain and pure, and most precious and easy to the understanding of all men.”

Most of us who have read the Bible have not had the feeling that all of the things contained therein are “plain and pure, and most precious and easy to the understanding of all men.”

But they were at one time. Nephi reports that when the Bible was first compiled, it “contained the fulness of the gospel of the Lord” and that it “went forth from the Jews in purity” (1 Nephi 13:24, 25).

What happened? The interaction of the Bible and the great and abominable church caused something cataclysmic to happen to the word of God. Notice the language with which Nephi explains the problem. He tells us that the great and abominable church has “taken away from the gospel of the Lamb many parts which are plain and most precious; and also many covenants of the Lord have they taken away” (1 Nephi 13:26).

He even tells us when it happened.

“Wherefore, thou seest that after the book hath gone forth through the hands of the great and abominable church, that there are many plain and precious things taken away from the book, which is the book of the Lamb of God. And after these plain and precious things were taken away it goeth forth unto all the nations of the Gentiles” (1 Nephi 13;28,29).

After the Bible had gone through the hands of the great and abominable church, it came to the Gentiles. But it was not as plain and pure and precious as it had been when it came forth from the Jews. Pieces were missing. Many plain and precious parts were gone. Covenants had been removed. The willingness of men to catch hold and cling to the rod (see 1 Nephi 8:24) was diminished. The response of readers would have been like mine as I toured the area looking for iron rods.

One of the railings I looked at during my drive was at my son’s house at the base of the mountain in south Provo. The walkway leading from the street toward the home was steep. The railing that followed the flight of stairs from the walkway to the front door was utterly unreliable. It had broken loose from the cement steps in two or three places, and inclined toward the yard at an alarming angle. I have frequently ascended and descended those stairs when I have visited my son, but I never grasped that railing for protection or direction. There was no security there.

My feelings about relying on that railing must have been similar to the feelings of the Gentiles about relying on the rod after it went through the hands of the great and abominable church. I was aware that a slip on those stairs could be lethal. My inclination was always to ascend and descend relying on my own care and wisdom rather than the railing. Likewise, the Gentiles must have been reluctant to trust their protection and direction to a rod that was no longer “plain and pure, and most precious and easy to the understanding of all men.”

Three things happened to the Gentiles because of the efforts of that abominable church to destroy confidence in the word of God.

“Because of these things which are taken away out of the gospel of the Lamb, an exceedingly great many do stumble” (1 Nephi 13:29).

Many are stumbling: Without the clarifying concepts of true religion that come from the plain and pure word of God, people have difficulty remaining on the path and moving in correct directions. Gay marriage is acceptable; pre-marital relations are normal; a belief in an evolutionary creation is expected. “An exceedingly great many do stumble.”

Satan has great power: I thought of this warning when I visited Las Vegas with my wife and three daughters. The brilliant neon advertising, the abundance of immoral invitations, the gambling. All are evidence of an exceptional power organized by a remarkable intellect to keep people from the path and the rod.

People are in an awful state of blindness: Paleontologist Stephen J. Gould declared:

“We are because one odd group of fishes had a peculiar fin anatomy that could transform into legs for terrestrial creatures; because the earth never froze entirely during an ice age; because a small and tenuous species, arising in Africa a quarter of a million years ago, had managed, so far, to survive by hook and by crook. We may yearn for a ‘higher’ answer—but none exists” (Quoted in Donald McCullough: The Trivialization of God, p. 16).

But Nephi tells us that the Lord will not leave the world is such an insecure condition.

“Neither will the Lord God suffer that the Gentiles shall forever remain in that awful state of blindness, which thou beholdest they are in, because of the plain and most precious parts of the gospel of the Lamb which have been kept back by that abominable church, whose formation thou hast seen. Wherefore saith the Lamb of God: I will be merciful unto the Gentiles, unto the visiting of the remnant of the house of Israel in great judgment” (1 Nephi 13:32, 33).

That mercy the Lord extended to the Gentiles is explained in the text.

“And after [the Bible] had come forth unto them I beheld other books, which came forth by the power of the Lamb, from the Gentiles unto them, unto the convincing of the Gentiles and the remnant of the seed of my brethren, and also the Jews who were scattered upon all the face of the earth, that the records of the prophets and of the twelve apostles of the Lamb are true. And the angel spake unto me, saying: These last records, which thou hast seen among the Gentiles, shall establish the truth of the first, which are of the twelve apostles of the Lamb, and shall make known the plain and precious things which have been taken away from them; and shall make known to all kindreds, tongues, and people, that the Lamb of God is the Son of the Eternal Father, and the Savior of the world; and that all men must come unto him, or they cannot be saved” (1 Nephi 13:39,40).

The restoration of these plain and precious parts that were removed, and the revelation of the covenants that were taken away will again offer the security of the iron rod to those who will follow it.

“And it shall come to pass, that if the Gentiles shall hearken unto the Lamb of God in that day that he shall manifest himself unto them in word, and also in power, in very deed, unto the taking away of their stumbling blocks—And harden not their hearts against the Lamb of God, they shall be numbered among the seed of thy father; yea, they shall be numbered among the house of Israel” (1 Nephi 14:1,2).

The rod has been restored, but that will not insure the safety of the Gentiles or the House of Israel. Lucifer has not abandoned his attack on the rod or on the trust people should have in the scriptures.

For example, in June of 2004, a new “translation” of the Bible appeared, edited by John Henson, and called, Good As New: A Radical Retelling of the Scriptures. The reworking of the Biblical text in Henson’s Bible is troubling. For example, in Mark 1:10,11, after the baptism of Jesus by John, the King James Version of the Bible reports this, “And straightway coming up out of the water, he saw the heavens opened, and the Spirit like a dove descending upon him: And there came a voice from heaven, saying, Thou art my beloved Son, in whom I am well pleased.”

Henson’s “Radical Retelling” give the account this way: “A pigeon flew down and perched on him. Jesus took this as a sign that God’s Spirit was with him. A voice from overhead was heard saying, ‘That’s my boy!’”

The Apostle Paul taught this: ” Nevertheless, to avoid fornication, let every man have his own wife, and let every woman have her own husband.”

Henson’s version of this passage is: “My advice is for everyone to have a regular partner. … If you know you have strong needs, get yourself a partner. Better than being frustrated!” (1 Corinthians 7:2,9)

Henson even cuts out eight New Testament books that don’t suit his “retelling:” 1 and 2 Timothy, Titus, 2 Peter, 2 and 3 John, Jude and Revelation. The assault on the iron rod continues.

People challenge the validity and the reliability of the scriptures constantly. Those who do not want to repent can find, with minimal effort, people and points of view to support them in their opinions.

The result of that is that the three great problems identified in 1 Nephi 13 continue to afflict the children of God in our day: an exceedingly great many still stumble; Satan has great (even increasing) power; and multitudes live in an awful state of blindness. This is no longer a result of plain and precious things being removed and covenants being taken away, but of an unwillingness of people to make the iron rod a part of their lives.

This state of affairs suggests to those of us who have caught hold of the restored rod that we have a divinely directed duty to communicate to others our feelings about the power of the scriptures and the importance of that iron rod.

I love the picture that goes with this story, showing the darkness and why we really need to hold on. Who is the artist?

I've always thought the Iron Rod, or 'word of God' is the Holy Ghost, who testifies to us of truth. The Lord directs our lives through the Holy Spirit, or Holy Ghost, and if we listen to and follow these promptings, we will never go astray.