“Who We Are”: New Film Explores Millennial Experience with the Gospel in Intimate and Unexpected Way | Meridian Magazine 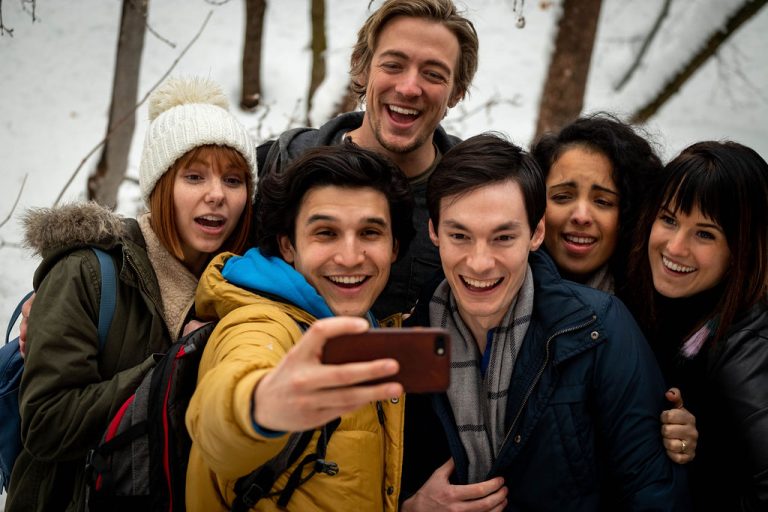 “Who We Are”: New Film Explores Millennial Experience with the Gospel in Intimate and Unexpected Way

Big box office hits these days are high action and high conflict. They seem to subscribe to the belief that “crisis reveals character”. We get to know and see the truth of each character in the scene only once they are walking through their proverbial fire. But in Who We Are, the latest from writer/director Michael Flynn (Midway to Heaven), we are invited to know and love six Latter-day Saint millennials not through conflict, but through the kind of increasingly honest late nights chats that are emblematic of some of the most memorable parts of the college experience.

In the film, six unsuspecting young people arrive at a cabin in the mountains on a beautiful winter’s day. They are there to help one Oscar Fielding with his research to learn more about the younger generation of Church members, to discover who they are, what makes them tick, their outlook on love and life. Only Oscar isn’t at the cabin, he’s left only a note and a camera and the opportunity for the group, who don’t know each other at all, to record the truth of their outlook and experiences in any way they see fit.

The result is an incredibly nuanced exploration of the millennial experience with Gospel living that invites you in, in a way that makes it feel like you are a part of the group, alternating between light-hearted games of spoons and heavy-hearted recounting of life’s complexities. The film explores topics from same-sex attraction to pornography’s effect on dating relationships, to returning home early from a mission and everything in between. But always from the vantage point of characters so believable that Flynn has been asked several times whether these kids feel exposed having their story on the big screen, not realizing it was just a group of actors playing fictional people.

So, how was this production able to achieve that level of believability?

“We had two weeks of rehearsal before we rolled camera,” shared director Michael Flynn. This is unusual for film. Often actors show up and have to portray the history and dynamic of a married couple with someone they’ve only met that day. “The rehearsal process was really important for us”, Flynn continued, “As a director I was able to work with the actors on the beats and the rhythms and the characters and the relationships…plus, it gave the actors time to bring their own thoughts into that whole process.”

“I went through in our first meeting and asked them a lot of questions about who they are personally and what was going on in their lives. It was really fascinating to have these six kids there and we just went around the room and shared…a lot of laughter, a lot of tears, some anger, frustration; certain actors feeling inadequate. But everything came out and we just learned a ton about everybody and when you do that, when people are so open, and their walls come tumbling down—just like Jericho—you really see inside and who they really are.”

And having gotten to such a vulnerable place with each other as real people, they came back to the script with a new level of openness to portray these characters whose walls also come down little by little throughout the film.

You might be skeptical that a film with six characters practically snowed into a cabin and just talking could hold your attention for the length of a feature, but I found myself intrigued, drawn in, and anxious to hear more right to the very last minute. It truly felt as though you were having a great conversation with someone you were anxious to know more about. Six someones.

When I talked with Michael about why he wanted to make this film, he mentioned that it was easy in Sunday school to intellectualize the struggles that you don’t personally have to deal with; easy to say, for example, that a young person with same-sex attraction just has to keep the law of chastity the same way as their single, heterosexual counterparts, never acknowledging what it would feel like to watch those counterparts move on, get married, start families, and still remain alone.

Never acknowledging, mainly because they just don’t get to sit down with someone who is really living it.

This film feels like sitting down with people that are living through all kinds of difficult challenges and getting the chance to really listen to them.

These kinds of difficulties are raised, but not answered by this film. If you are waiting for a neat bow, there isn’t one. But neither does the exploration of seemingly unanswerable questions leave the viewer feeling that the gospel isn’t the place to be. The overarching feeling is always that it’s worth it to keep trying, keep coming, and that inside is the place to muddle through what you need to figure out, not outside.

All in all, Who We Are is a truly unique film experience. It is an opportunity to intimately learn about some of the difficulties that “youth of the noble birthright” are facing in a medium that is more personal, more impactful than just reading articles or hearing statistics.

By the end of the film, you will feel that you too have spent a snowy weekend at that cabin; that you have shared an emotional intimacy with these people, that you did not earn, but for which you are still very grateful.

Who We Are has a premiere event coming up on Thursday, November 11 at Jordan Commons. For those of you who are local, click the image below for details on how you can register to attend. The film opens this weekend in theatres throughout Utah.

For those outside of Utah, the DVD is also available now from Seagull Book. CLICK HERE to get your copy.

Audience Reactions from this film’s previous screening at the LDS Film Festival:

Hurrah for Michael Flynn! The seasoned actor/filmmaker has broken with convention to create a terrific thought-provoking film. WHO WE ARE is more than worth the watch. The casting of characters is superb. The performances are so good, the dialogue so authentic, and Flynn’s direction so well done, I almost disremembered it was a fictional drama and not a real-life documentary. We should try not to miss those special films that not only entertain, but enlighten and inspire.

I was not prepared for the amazing emotional and spiritual experience that I had. In this masterful film, Michael has explored in a gripping way some of the biggest challenges facing young people today, especially LDS millennials.

Wow! Loved the movie, loved the message, loved the way it was written and presented. The actors were incredible. As I listened to each person’s story I was truly drawn in. Thank you for having the courage and using your talents to bring this to the public. I don’t know if it matters or not but I am an active member of the LDS church, continually trying to understand and find my place. And, please share my thoughts with anyone that could get this movie out, it’s important!

Thank you for the masterpiece. This was a movie that had to be made. It was beautifully shot, with amazing actors and an incredibly well told story.

I constantly found myself connecting with each character in different levels. It felt genuine and very relevant to the current [Latter-day Saint] cultural scenario.

The film is available on DVD from Seagull Book. We've now added that information above, thank you for asking!

Will this film be screened outside of Utah? Can it be ordered on DVD or is it available through live streaming or some other media?