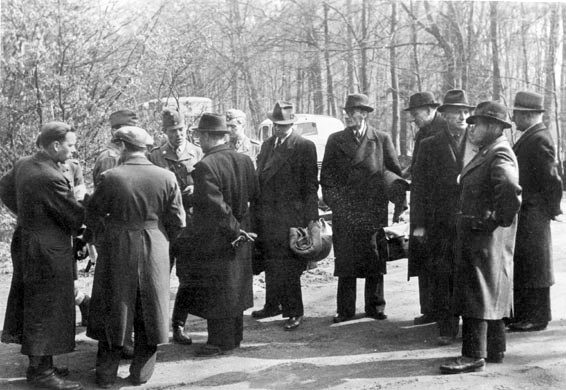 Elder Wallace D. Montague reported that he and two other missionaries were walking down a street in Dresden when they were arrested by the police. They were taken to a nearby precinct and questioned for two hours. When they asked for permission to tell other missionaries where they were, one officer sneered and said, “You are political prisoners. You are going no place.”

That phrase struck great fear in their hearts. It was common knowledge that people taken by the Gestapo were never heard from again. The missionaries were transferred to the main prison, where they had their pictures taken with their prison numbers. Again they asked for permission to contact the mission president, but this too was denied. All personal belongings, including passports, belts, handkerchiefs, money, pens, and so forth, were confiscated, and they were marched off to individual cells. Frightened and in despair, Elder Montague sat on his cot and tried to decide what to do. The situation seemed utterly hopeless. Elder Montague writes:

All of a sudden it occurred to me: “You are in this land as a servant of Father in heaven and have come to do His will. He has promised that if you will go and do what He commands He will provide a way for that to be accomplished. The one way to get a message outside these prison walls is to pray to your Heavenly Father. They cannot stop you from praying.”

In humility, and a bit ashamed for not having thought of it sooner, I knelt by the prison cot and told my Father in heaven about the trouble we were in and asked for His help in order that we could continue about His work among that people.

I arose from my knees, folded the bed against the wall, and immediately heard a clicking noise at the cell door.

To read the full article on LDS Living, CLICK HERE.