When 40,000 Christians Gave a Muslim a Standing Ovation | Meridian Magazine 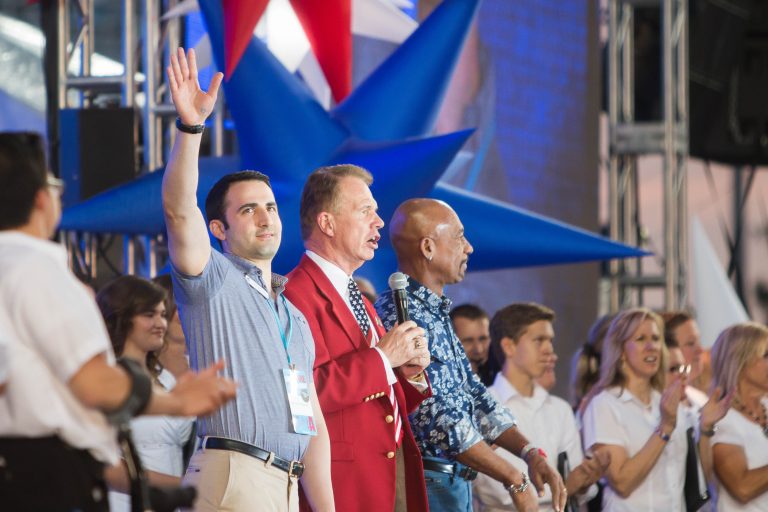 When 40,000 Christians Gave a Muslim a Standing Ovation

Cover image via The Daily Universe.

Lately it feels like America is being torn asunder. Between hate crimes against the LGBT community, divisive politics, cops shooting civilians, civilians shooting cops, and mass media stirring the pot, as a nation we seem in short supply of unity, understanding, and shared respect. But my wife and I witnessed a moment of love and gratitude that will remain with me forever. We witnessed 40,000 Christians giving a Muslim a standing ovation.

A Celebration of Diversity

On July 2, 2016 my wife and I attended Stadium of Fire, an annual Independence Day celebration in Provo, Utah (which is broadcast to over 1 million U.S. military men and women worldwide). We made the drive from St. George for the concert by country music legend Tim McGraw, along with the advertised “largest stadium fireworks show in America.” Both exceeded our already-high expectations, but neither proved to be the highlight of the evening.

Provo is known as a predominantly white community, largely made up of Latter-day Saints and other Bible-believing Christians. I was pleased that both our emcee and the singer of our national anthem were African-American women. The Unity Gospel Choir, featuring Nigerian-American Alex Boye, provided patriotic music after McGraw’s appearance. The evening offered plenty by way of diversity, but it was the appearance of Iranian-American Amir Hekmati which offered the evening’s most poignant celebration of freedom.

The Loudest Applause of the Night

Talk show host (and military veteran) Montell Williams came out and told Hekmati’s story. A former Marine who served with distinction in the Iraq War, Hekmati was arrested and imprisoned as a traitor while visiting his ailing grandmother in Iran. Originally sentenced to death, his sentence was lightened to ten years in prison. For over three years he suffered abuse, deprivation, and other inhumane conditions while languishing in a cell on the other side of the world.

At the previous year’s Stadium of Fire, Williams had asked the crowd to pray for Hekmati and reach out to government officials in order to secure his release. He asked those in attendance to exercise their faith and do their part to bring home a hero whose “only crime was wearing our uniform.” He then announced that Hekmati had been released, and was in attendance that night.

“The first time I heard about Provo was in a prison cell. Your prayers have been heard. Thank you.” As Hekmati’s words echoed around the stadium, the crowd was already on its feet, roaring with approval and appreciation for this hero. The truth is, I don’t know for a fact whether Hekmati is Muslim. The monitor captured Hekmati’s family in the audience and the women were wearing hijabs. This, combined with his Iranian heritage, means that in the eyes of 40,000 people (most of them white Christians) he likely was a follower of Islam… and he was given a hero’s welcome.

Tim McGraw put on an amazing show and the fireworks were beyond spectacular. But the loudest, longest applause of the night belonged to a man who fought for America and was imprisoned and mistreated for it. He was Iranian by blood, with Muslim ancestors. Though he was ethnically (and likely religiously) distinct from the majority of the crowd, he was an American. He was human. He was our brother. We can treat everyone this way, if we’ll choose to. They don’t have to suffer in a cell to earn it from us, either. We can give it freely.

Jonathan Decker is a licensed marriage and family therapist available for online sessions throughout Utah and face-to-face sessions in St. George. He was the co-host of The KJZZ Movie Show, winner of the campus-wide BYU Talent Show, performer with Divine Comedy, and star of numerous independent action-comedies. His book 250 Great Movies for Latter-day Families is now available in paperback and Kindle. You can see him on multiple panels in September’s Salt Lake Comic Con. For Jonathan’s relationship tips and family movie reviews please visit yourfamilyexpert.com.

I, too, am so happy you shared this experience. Gave me goose bumps just to read it. We are in our eighties now....attended the Festival of Fire once and it took us almost two hours to get home to Salt Lake, so haven't repeated the experience. However, I know it is always an awesome experience and your description gave us just a little of its flavor again. So grateful for America and for my fellow-Latter-day Saints. Thank you.

Thank you for sharing your experience at this celebration. I'm proud to be an American, prouder to be Mormon.