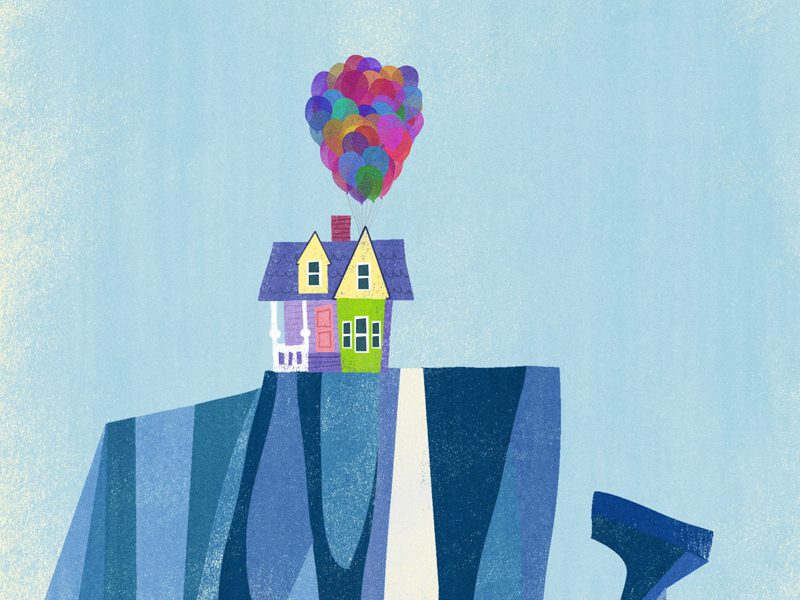 Editor’s Note: Mariah has recently released an eBook entitled So You Think You’re Too Poor to Study Abroad, find out more about it by CLICKING HERE. To ‘like’ Mariah on Facebook, click here.

Hopefully you are all familiar with the Disney/Pixar movie, Up. You know, the one that had you all weepy in the first fifteen minutes of the film? If you’re not, it begins by telling the story of a couple, Carl and Ellie. They are childhood sweethearts, united by their enthusiasm for adventure and exploration. They grow up and get married and continue to dream of going to an exotic destination called Paradise Falls.

Ultimately, things keep coming up and getting in the way and other expenses become more important and when Carl is finally going to surprise Ellie with the tickets to South America (they have grown old now), she falls ill and ultimately passes away before she can use them. This is not a spoiler alert, by the way. All of this happens in the first 15 minutes.

That movie really gets at me. And it isn’t just because it masterfully captures some really poignant things about life and love, it’s because I still wish Ellie had gone to Paradise Falls.

I’ve had the opportunity to do a lot of traveling to this point in my life and it has completely redefined who I am. It has not only taught me how to work for the things I want, but it’s also taught me how much more I have to learn about everything. I have seen so much beauty and been impressed by the sublime, seen the range of human creativity and innovation and met so people that have inspired me to work harder and be better.

Honestly, I’ve accidentally stumbled into a lot of other people’s Paradise Falls. I went to Petra, Jordan without even knowing what it was and now I hear from people all the time that they have always dreamed of going there. I’ve seen the Pyramids of Giza and Angkor Wat and stalked an African lion while it stalked an antelope and eaten gelato looking out on the Grand Canal in Venice and ate (you guessed it) a hot dog standing at the base of the Eiffel Tower.

I know that I’ve had a lot of experience that other people haven’t and the thing is, there’s no reason that they shouldn’t have it too.

I desperately want other people to be shaped by adventure and discover their own strength and adaptability and learn new ways of seeing things and get to watch the sunrise from the top of mountains they never knew they could climb. I want people to dream and then have the experience of watching their dream come true.

What is most people’s immediate response to all of this? “Well, I don’t have the money to travel.”

They may be true, right this second, but it doesn’t have to stay true. It doesn’t take as much money as you’d think to see some of the most amazing sights in the world. Mostly, being able to travel is not a matter of wealth; it’s a matter of priorities.

I want to share what I’ve spent the better part of the last six years making it my job to figure out. I wanted to share it so much that I wrote a book about it: So You Think You’re Too Poor to Study Abroad. I wrote the book geared towards students, because that is probably the time of life where the most travel-funding resources are already at your disposal if you just know how to access them, but I hope that it can be a helpful guide at any stage.

I want you to get to your Paradise Falls. First though, you have to really want it. Don’t dismiss the idea of far-away places because you assume, without checking, that they are out of your reach. I saw a roundtrip flight to China last week for less than $600. I saw a 9-day tour of India including airfare for $899.

Open yourself a special savings account today and put $20 in it. Start somewhere. Keep putting $5 here and $35 there in that account and next thing you know you’re standing on top of Machu Picchu in real life and it wasn’t even as painful to get there as you thought. If it sounds too easy, start by investing $4.99 in this book that will give you the knowledge that will get you the rest of the way. Or gift that knowledge to your college-age children or grandchildren. Maybe you could all go to Paradise Falls together.

The experience and research that I’ve poured into So You Think You’re Too Poor to Study Abroad has gotten me all over the world on a shoestring budget and I am who I am because of it. Find yourself on top of ancient walls and down narrow, old world streets. Try food you never knew existed. See what’s just outside the picture on that postcard. Step inside someone else’s experience and see what you can learn from it.

“We are the music makers, and we are the dreamers of dreams.” –Arthur O’Shaughnessy

I want to thank you for your article! It has inspired me to do just exactly what you said--plan and do my dream plans now and stop putting them off until it is too late! I have been doing that for so long and things will never change until I change them. I had taken a second job to get ahead of my bills but instead I plan to use those funds to travel to my dream destinations (on a budget) instead! Thank you so much! I have bought your book and will really learn a lot from it. This is from a 55 year old grandmother who has worked hard all of her life!