What to See at Tuacahn: LDS Reviews of Shrek, Newsies, and Mamma Mia! | Meridian Magazine 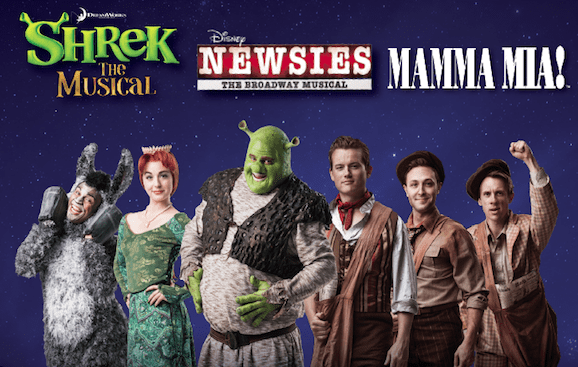 What to See at Tuacahn: LDS Reviews of Shrek, Newsies, and Mamma Mia!

Tuacahn Amphitheatre boasts one of the most gorgeously-unique theatre locations in the world. Nestled against red rock canyons just outside of St. George, Utah and boasting a newly expanded restaurant and gift shop, just being there is half of the experience.

Fortunately, the other half is first-rate off-Broadway productions that never disappoint in their energy, quality, or lavish design. This season’s offerings include Shrek: The Musical, Disney’s Newsies, and the ABBA showcase Mamma Mia. I was fortunate enough to catch all three. Which are worth your time and money? To which should you take the kids? I’ve got the inside scoop! Read my reviews below and get your tickets at tuacahn.org.

As with any stage adaptation, the stage musical makes some changes and tweaks (most notably loads of new songs), but by and large this is the Shrek story you know from the first movie. If you enjoyed that, you’ll enjoy this. Steve Judkins captures the rough-around-the-edges charm of the character, while Whitney Winfield pleasantly evolves from token damsel-in-distress to a more well-rounded character as Fiona. They have pleasantly irreverent romantic charm. Andre Jordan channels Eddie Murphy just fine as donkey, while Jeffrey Scott Stevens gets plenty of laughs as villainous Lord Farquaad; the way they make him look miniature is fairly ingenious. The songs are lively, the set design is excellent, and the jokes largely connect.

Content-wise, the play is at a strong PG level, same as the film, with plenty of subtle innuendos that only adults will get (though I think the film has more). Parents who choose to bring kids should be prepared to talk about “Let Your Freak Flag Fly,” a musical number near the end that celebrates diversity and tolerance so that kids take away from it what parents hope they will.

Gospel sources to draw from in post-play discussion include Elder Russel M. Nelson’s address to the youth “What is Tolerance?” as well as King Zeniff’s appreciation of “that which was good” among those who were different from his people (see Mosiah 9:1).

The 1992 film, about teenage newsboys striking against oppression in early 1900’s New York, was a family-favorite musical when I was growing up. I’m happy to report that the play is even better than the film. The characters are largely the same, but here they’re more strongly-written. Indeed, the story is improved upon and solidified overall, roping in the historically-accurate plot point that the newsies strike snowballed into a larger strike supporting several oppressed professions of the working class. The songs you know and love are all present, accompanied by stunning dance numbers. The messages are poignant and timely, and I came to love the characters. The decision to change Bill Pullman’s reporter character to a young female journalist fighting for her chance is inspired and gives the romance more heft. Of the three, this was the standout show for me.

Newsies, like the film, is at a light PG level in terms of content. There’s a few “h*lls” and “d*mns,” dancing girls in fairly tame burlesque outfits (this is Disney, after all) and thematic elements about kids and teens being abused and neglected at a halfway house. Gospel sources to draw from in post-play discussion include 1 Peter 5:8-9 (stand firm against evil), Proverbs 22:16 (he that oppresses the poor to increase his riches shall come to want), 2 Nephi 26:33 (black and white, male and female, all are alike unto God), and 1 Corinthians 1:10 (be perfectly united).

The beloved 70’s songs of Swedish pop group ABBA are weaved throughout Mamma Mia, the tale of an American single mother in Greece whose daughter is getting married and would like to invite her father… who could be any one of three men the mother had trysts with during the summer 20 years earlier. The storyline of Mamma Mia is fit for a daytime soap or talk show, but the cast injects it with real heart and humor. There’s a bit more style than substance here, with 70’s disco clothes, psychedelic light displays, and buff snorkelers hilariously grooving on stage. The mother-daughter story is touching, as is the gradual unraveling of pent-up heartbreak and the hope for new love.

Still, this is definitely PG-13 level material, with innuendo aplenty (the song “Does Your Mother Know That You’re Out?” revolves around an older woman clearly having a fling with a younger man here, for example), and a fair amount of skin as men in swimsuits strut their stuff. There’s also some mild language, though one phrase you’d expect to hear is substituted with “Oh my gosh,” no doubt a concession for Utah audiences. It’s not for everyone, but if you go leave the kids at home and be sure to talk with teens about the play and its story.

Gospel sources to draw from in post-play discussion include Elder David S. Baxter’s conference address “Faith, Fortitude, Fulfillment: A Message to Single Parents,” as well as Mosiah 3:11-12 (some people, like the characters in the play, sin ignorantly without knowing God’s will and He will be merciful to them).

Jonathan Decker is a licensed marriage and family therapist and CEO of Your Family Expert. He moonlights as the “Mormon Movie Guy,” reviewing Hollywood films from a Latter-day Saint perspective. He offers daily Gospel insights in his Facebook group Ask a Mormon Therapist.