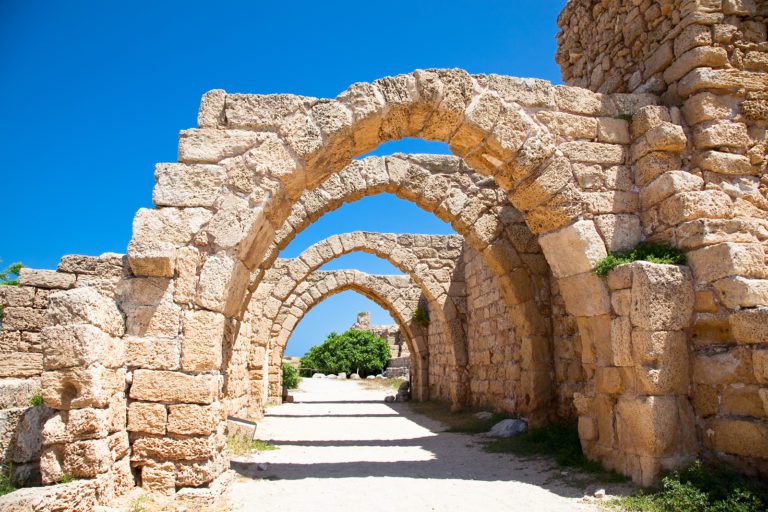 What the Jews Expected When They Looked For a Messiah

During the Christmas season, I’m always transported back in my heart and mind to the holy land, that place that so thoroughly captured my spirit. We’d go to these incredible sites that some people only dream of, and I can still count on one hand the number of places I really deeply studied on my own before we visited them. So it was in a state of extreme ignorance that I entered Caesarea Maritima that [blistering hot] day in July. I basked in the moment as I looked out to sea and realized that I have spent more time in my life around the Mediterranean than around any other major body of water in the world. I was awestruck by the deep-water port on which I stood and even more amazed to find out that it was man-made.

The video that we were able to see at this sight was no blockbuster, but the images of what the city would have been like in its heyday bowled me over. Herod wanted to build a Greco-Roman city that would not only ensure his legitimacy to his subjects, but also rival Alexandria as the Eastern Mediterranean’s center of trade. There wasn’t a natural harbor in the location Herod wanted to use, but rather than letting that stop him, he created an artificial one. It wasn’t until I had this city, that is brilliant even in its ruined state, before my eyes that I understood why the Herod of Jesus’ young life could possibly deserve to have the suffix “the great” applied to his name.

Going to all those monumental sites completely unaware of their significance or implication afforded me one benefit. Armed with nothing but my imagination I was able to see these feats of nobility in their peak and looked at them as the common people of those days with no real, big-picture perception would have seen them. I sheepishly admit that I find myself indeed impressed with these works of men’s hands.

The other men to which “the great” was applied distinguished themselves likewise with vast accomplishments and worldly esteem. Centuries before Herod the Great, Alexander the Great was proving his merit to the world with his “inexorable advance and spectacular conquest.” Alexander began by breaking the power of the Persian governors in Asia minor with a relatively tiny army until he was marching unopposed throughout the Mediterranean. Alexander’s empire eventually extended from Macedonia and Greece in the west as far as Afghanistan and Northern India in the East.

Even before Alexander, Cyrus the Great had worked as an instrument in the hands of the Lord. His work in overtaking Babylon and solidifying the Persian Empire and wisely incorporating the cultures of many peoples to ensure stability, however, would have garnered him such a title in history, regardless of his role in the reestablishment of the Lord’s covenant people.

It is in the collision of the legacies of these “greats” that I realize what it was that Israel anticipated as they earnestly sought the arrival of their long-awaited Messiah. They sought a man who would unify the dissenting peoples and apply a heavy-hand to the restoration of righteousness as Cyrus had done. They expected a man whose conquest would be as inescapable as Alexander of old; a man who would showcase his greatness by engaging in massive and fantastic building projects that would make Herod’s current ones seem laughable.

When the children of Israel were delivered from Egypt they sang the praises of the Lord. “Thy right hand, O Lord, is become glorious in power; thy right hand, O Lord, hath dashed in pieces the enemy” (Exodus 15:6). Israel constantly lived under the warring thumbs of “the Greats” and according to their own Torah “[their] Lord is a man of war” (Exodus 15:3). They lie in wait for a Christ who would dash in pieces their many ‘great’ enemies, come off conqueror, and easily render himself worthy to be called Messiah the Great, connoting the same thing that it always had.

So it was into this world of greats that a child was born to the wife of a carpenter and laid in a manger because there was no room for them in the inn. Shepherds, the lowest class of people were the only earthly ones there to greet him. When the boy grew to be a man, he did not rise to prominence and prestige. Instead, he taught that “blessed are the meek for they shall inherit the earth” (Matthew 5:5). He didn’t wield the mighty reigns of a new empire or break the Roman bonds that held Israel bound. Instead, he taught the people to “love your enemies, bless them that curse you, do good to them that hate you, and pray for them which despitefully use you” (Matthew 5:44).

What an unusual specimen, this Man that taught what no other man ever had. A living proof to the fact that God’s ways are not our ways, “He [had] no form nor comeliness; and when [they saw] him, there [was] no beauty that [they] should desire him” (Isaiah 53:2). He brought the means to ransom captive Israel, but seeing, they saw not, and they chose to remain in the imprisonment that for centuries had dammed them up and rendered them utterly powerless. They became the very men who despised and rejected He whom Isaiah prophesied would be despised and rejected of men. Jesus Christ came unto his own and his own received him not; he did not fit the “great,” the man of war who they believed was to come, and so they became the only nation that would crucify their God.

“Almost thou persuadest me to be a Christian” (Acts 26:28); the words spoken here so long ago by the grandson of its builder echoed in my head as I continued to scrutinize and examine the beauty of Caesarea Maritima. Paul brought his case before Agrippa on these very stones. The man in shackles bore the truth and was hated for it. The man on the throne; the only one of the two of them with any hope of being called ‘great,’ lied to himself in hatred. How is it that a people who awaited greatness received only a man born of humble birth and despised of men? Why when they sought a man whose soldiers would enslave their enemies would they get a man whose servant would become enslaved by their enemies?

The Lord sent exactly what he promised. Jesus Christ is the Son of God, not only did he create the universe (the ultimate construction project), but he is the only one with the power to build us up in great ways so that we may be monuments to his glory. Only the Christ can free us from the temptations that would take us captive and enchain our souls. Only the Lamb of God can truly unify his people and knit our hearts together as one. Herod and Cyrus and Alexander were great in the eyes of men, but the knees that bowed to them in life, bow to them no more.

Jesus of Nazareth met few bowed knees in his life, but one day every knee shall bow and every tongue shall confess that he is Christ. In him I can be truly changed and become a “great” myself, while Caesarea Maritima remains merely a barnacled memorial to incapacity.

Tearfully Beautifu! It is complete, and nothing can be added to it. Thank you.