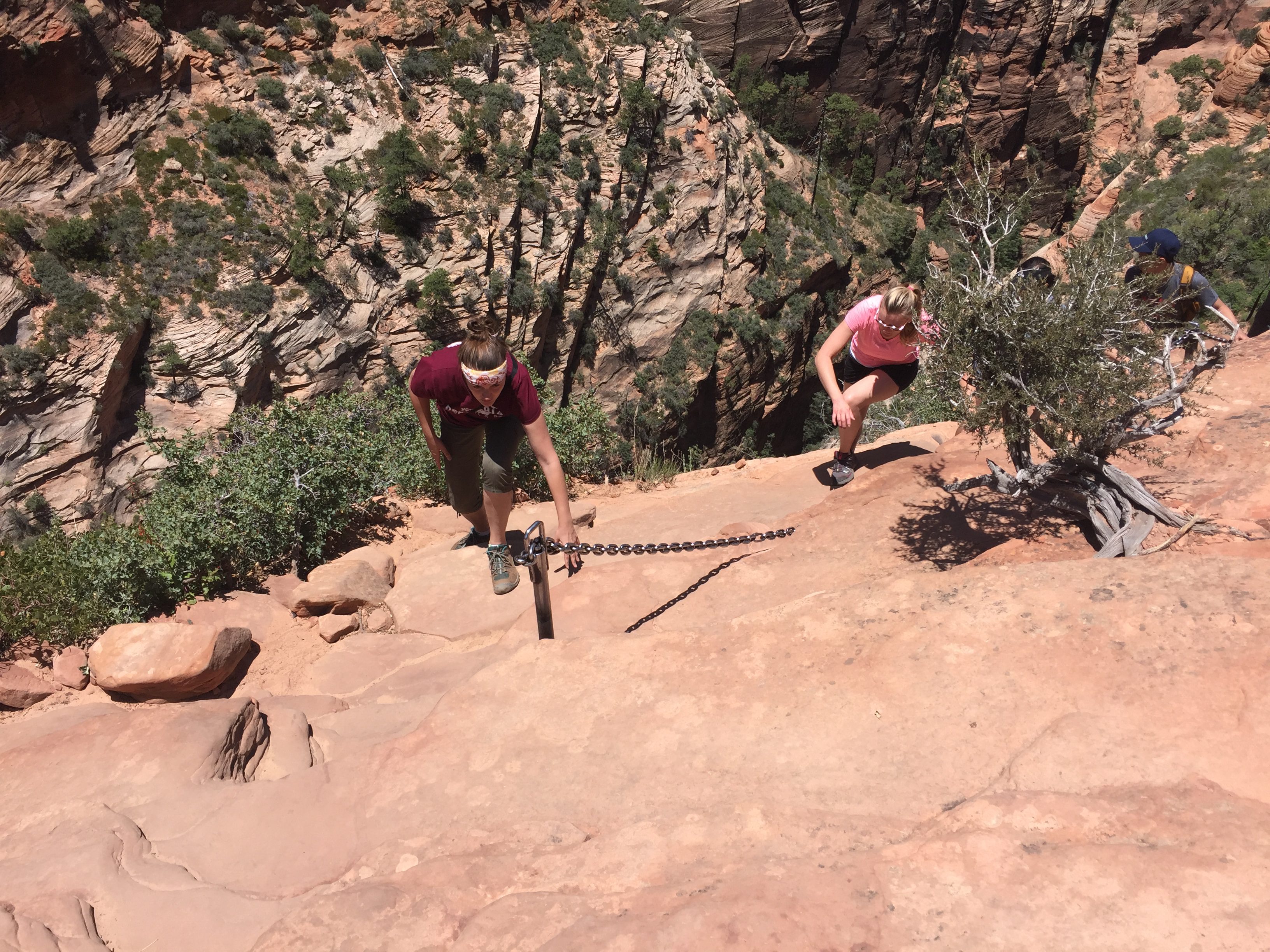 What Standing on a 1200-foot Cliff Taught Me About Fear

To visit Mariah’s travel blog where she is documenting her process of preparing to hike Mt. Kilimanjaro, click here. To check out her book, “So You Think You’re Too Poor to Study Abroad”, click here.

I’ve always known about (and been vaguely scared of) the iconic Angel’s Landing hike in Zion National Park, Utah. I actually didn’t know that much about it except that it involved a section of clamoring up a veritable tightrope of rock with only a chain to hold onto and that people had died doing it.

So, what did I decide to do the morning before we were to drive south to take on the cliffs ourselves? Googled “Angel’s Landing + death” obviously. And so it was, fueled with the anxiety of names and numbers and queasy google image views down to the valley below that I huddled that night in our queen size sleeping bag in a tent among the sage brush and the sand, wondering whether I would survive the following day’s adventure. I seriously could not get to sleep and I’m not usually an anxiety-prone person. I wasn’t so much worried for myself as I was horrified at the prospective experience of seeing my husband fall. 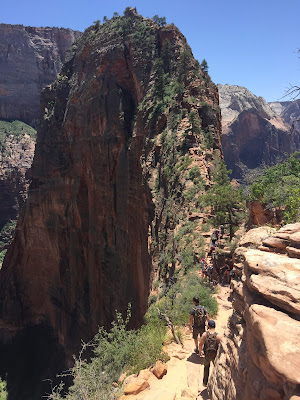 I’m learning recently that I deal incredibly well with the actual difficulty of things, but do a terrible job with the potential difficulty of things. When I partially severed my tendon on Groundhog’s Day of this year, the thought of my gaping wound and the needles and the stitches were freaking me out to the max, but I was incredibly well-behaved and patient as the doc actually did the stitching. Maybe my imagination is just too active. I should have perhaps listened to the sentiment expressed by both Newt Scamander and Og Mandino (note: one of those is a real person and one is fictional, but both names sound equally made up) when they said essentially, “[she] who worries, suffers twice.”

And indeed, when I got to Angel’s Landing (4.8 miles round trip, not too bad), I got up the canyons to the part with the chains and thought “THIS is it?” “This isn’t scary AT ALL”. Unfortunately, I mistook the start of the chain part as the end of the hike, so it only got worse and worse and I later ate my words because it IS scary at all.

Fear is a funny thing. Bryan always tells me that fear and excitement are physiologically the same in your body (pounding heart, rapid breath etc.), it’s just your mindset you have to work on. I guess to a degree I believe that’s true, but it’s so much easier said than done to flip a mental switch and suddenly be thrilled about looking out over a 1200 ft drop-off-of-doom that moments ago made you nauseous with terror. I couldn’t just flip the switch, but surprisingly what helped me the most was facing a second fear to cancel out the power of the first.

At the start of the hike I said out loud to Bryan and his sister Sarah, who went with us, “If I meet any German speakers on this hike, I have to speak in German with them. I’m saying it out loud so you can hold me accountable.” Now, German was my second major in college. I literally have a Bachelor’s degree in it, but speaking with natives just scares the pants off of me. 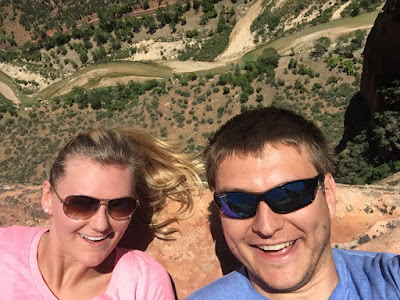 Bryan and his sister being much braver than I.

Last summer, I was seeing Don Giovanni at an opera house in Prague and saw that some better seats than mine opened up when some students decided to move to a different row. Those remaining were a German school group and I could hear them speaking to each other. I thought, “You know, I should ask them if those other people are coming back or if it would be ok if I scooted over.” It wasn’t difficult German, I knew exactly how to say it. I thought in my head, ‘just be confident’. I geared up and lifted my arm up and across to get their attention and then chickened out mid-gesture. The result was that it looked like I’d suddenly done half of a ridiculous dance move/that my muscles had spasmed wildly and then stopped. It was way more embarrassing than just finishing the interaction, but I panicked.

Back to being perched on the red sandstone cliffs of Zion. I should’ve known when I made my declaration that seeing Germans was 100% guaranteed. People think it’s random that I speak that language, but the one language besides English that I have encountered literally every single place I have ever been–from remote mountain orphanages in Thailand to safari lodges in Kenya to Aztec ruins in Mexico–is German. German speakers travel. They just do.

So, suddenly we found ourselves on a section of the hike where we were sort of huddled along a three foot ledge, red cliffs behind and drop-off below. We stopped to let people come down a narrow section ahead (this place is wicked crowded, so there are lots of places you get stopped waiting for people to come down or go up ahead of you). We could hear that the man on Bryan’s right, who had stopped for a breather, had a heavy accent. So, of course Bryan (who is not afraid of strangers in the least) says, “Where are you from?” “Germany” came the reply.

I felt the eyes of my companions immediately on me. Accountability is no joke. I literally looked down the 1200 ft canyon in front of me and it’s like all my fear cells had to rush to the German department instead. The ledge didn’t even seem scary, but speaking up did. “Ich spreche auch Deutsch”, I finally managed, “I speak German too”. I told them that it was my college major and they asked me where I went to college. They were amazed that you could even study German as a major in Utah. We chatted a little more and then it was time to keep hiking. I had done it! I had conquered my fear!—except then we ran into them like fifteen other times on the hike.

This phenomenon of my one fear canceling out the other out taught me something interesting. When you’re clamoring across the rock formations at Angel’s Landing and you ask yourself, “what’s the worst that could happen?” The answer is, “you could, pretty easily, fall 1200 feet to your death”. When you’re talking to a native speaker of a language you are still trying to learn and ask, “What’s the worst that could happen?” the answer is…not really anything. Maybe you’ll say something silly and embarrass yourself or maybe someday someone will be rude to you, but I have never listened to someone struggle to speak English with me and thought even a tiny bit less of them for stumbling through it. Having the juxtaposition of the two fears side by side made me think, “In reality, what am I so afraid of?”They would stop for a break and we’d run into them, then we would stop for a break and they’d run into us. Each time they’d make comments or observations to me in German and each time after I responded, I’d spend the next section of mildly treacherous rock climbing just kicking myself for saying the wrong form of this word or not remembering what that word meant. My fear cells continued to just congregate in the German-speaking department of my brain. Even as my hand grabbed for a sagging chain that was ill-placed to save my life if it needed to, or my foot slipped around in a sandy spot and everything was precarious, my fear was totally focused on how I’d said “vielen” instead of “viel” back there. Like an idiot. 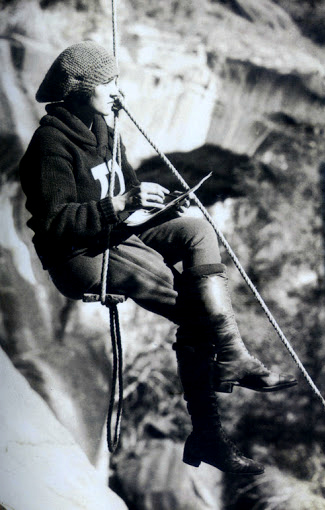 Dora Montague, one of the first visitors to Zion National Park and my new hero. She’s just hanging out there drawing like it ain’t no thing.

I’ve been working on my German in one form or another since I was 14 years old and struggled with speaking with natives that entire time. Why did it take thirteen years and an enormous cliff to make me finally think to say, “Wait a minute, what am I actually afraid of? What’s the worst that could happen?” We shouldn’t allow our fears to run rampant and go along unquestioned. I think most of them, if we held them up to the light would turn out to be nothing at all, a mouse in a bear suit.I believe 7 people have died at Angel’s Landing since 2004. On the drive back from Zion, we saw a sign that said there had been 22 deaths on Utah roads in the month of May alone. In reality, in terms of potentially life-threatening activities, we should’ve probably been more scared of the drive down to the park than the hike itself. But fear isn’t logical. It doesn’t use good sense, but we all too often hand over the reigns to it anyway.

And in case you were wondering, I ended up loving the hike. We sat on the top of the world and ate oranges under a shade tree strong enough to grow right out of the rock. My sister-in-law said an orange has never tasted so good and my husband said his smile muscles were starting to hurt from so much use. Even I felt the triumph of it and the awe and grandeur of the looming red canyons all around us and the greenish, curling Virgin River below.

It made me quietly wonder what other unforgettable, life-affirming, joyous experiences lie just on the other side of my fear. I guess it’s time to find out.

Below is our FIRST OFFICIAL VIDEO DIARY for our Kilimanjaro Training. Subscribe to the channel if you want to make sure you don’t miss the next one.

Well-written, relatable, and very enjoyable article. I like your open and honest writing style. I have never done that hike, but I just read about it in Gerald N. Lund's book, "The Undaunted," which I highly recommend, by the way.

I love that hike! I've done it twice!! If I had no fear, I would travel more, and speak more to strangers.