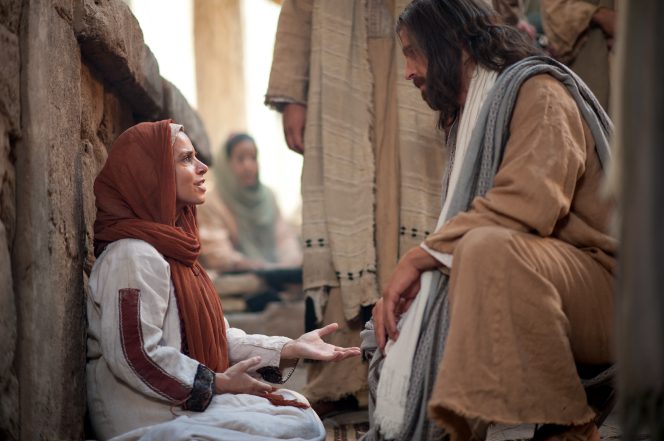 During the Christmas season, Christians all over the world celebrate the birth of Jesus Christ. But, as President Gordon B. Hinckley observed, “There would be no Christmas if there had not been Easter” (Ensign December 2000). The reason we celebrate his birth is because of the salvation made possible through his death. Although Christians everywhere believe that Christ’s death makes salvation possible, members of The Church of Jesus Christ of Latter-day Saints believe that innumerable people will be saved through Jesus Christ!

More than 2000 years ago, an angel was sent from heaven to deliver “good tidings” or, in other words, “good news” to the world. Luke described this sacred event in these words:

And there were in the same country shepherds abiding in the field, keeping watch over their flock by night. And, lo, the angel of the Lord came upon them, and the glory of the Lord shone round about them: and they were sore afraid. And the angel said unto them, Fear not: for, behold, I bring you good tidings of great joy, which shall be to all people. For unto you is born this day in the city of David a Saviour, which is Christ the Lord. (Luke 2:8-11)

As the angel made clear, the birth of the Savior was good news not just to those few who would be aware of it’s occurrence in Bethlehem, but it was “good tidings of great joy … to all people.” How Christ’s birth would be good news that would ultimately affect “all people” can more fully be understood through latter-day revelation.

In a vision given to the Prophet Joseph Smith and Sidney Rigdon, the Lord Jesus Christ again revealed himself to mankind. Like the New Testament Apostles, Joseph and Sidney were privileged to see the resurrected Savior standing on the right hand of God and testified “That he lives!” (D&C 76:22-23). Not only would this vision confirm these truths found in the Bible, but it would further reveal the far-reaching scope of Christ’s atonement by declaring additional “good tidings” beyond the good news shared to the shepherds that Christmas night. They recorded:

And this is the gospel, the glad tidings, which the voice out of the heavens bore record unto us— That he came into the world, even Jesus, to be crucified for the world, and to bear the sins of the world, and to sanctify the world, and to cleanse it from all unrighteousness; That through him all might be saved whom the Father had put into his power and made by him; Who glorifies the Father, and saves all the works of his hands, except those sons of perdition who deny the Son after the Father has revealed him. Wherefore, he saves all except them. (D&C 76:40-44).

He saves all except them! Christ saves all the works of his hands! The magnitude and extent of the salvation made available through Jesus Christ has scarcely entered our limited minds! Christ saves all except those few who become perdition. To fully appreciate this truth, we must first understand how a person qualifies to be “perdition,” which means lost from salvation, and how few fall to this condition. The Prophet Joseph Smith explained:

“What must a man do to commit the unpardonable sin? He must receive the Holy Ghost, have the heavens opened unto him, and know God, and then sin against him. After a man has sinned against the Holy Ghost, there is no repentance for him. He has got to say that the sun does not shine while he sees it; he has got to deny Jesus Christ when the heavens have been opened unto him, and to deny the plan of salvation with his eyes open to the truth of it; and from that time he begins to be an enemy. . .

“He gets the spirit of the devil—the same spirit that they had who crucified the Lord –the same spirit that sins against the Holy Ghost. You cannot save such persons; you cannot bring them to repentance; they make open war, like the devil, and awful is the consequence. (Teachings of the Prophet Joseph Smith p. 358).

This means that to be lost to perdition, a person must first join the Church and progress in light and knowledge until they are in a place where they can see God through temple ordinances and be prepared for exaltation and then, not just sin (for we all sin), but come out in open rebellion against God like the devil. They must deny and defy God to qualify to become Perdition (D&C 76:31). Just as both men and women can be exalted to become like God (D&C 132:19-20) so they can both fall to become like the devil (D&C 132:26-27).

But the point of this vision (D&C 76) is not to describe Perdition but to reveal salvation! It is the announcement that Christ will save “all except them” (D&C 76:44). To fully appreciate the implications of this, I invite you to ponder a simple question: How many people do you know personally who fit the description given of perdition? The answer is likely none. You have probably never met anyone who qualifies for perdition. This means that Jesus Christ will save everyone you know. Everyone you have ever met, everyone you have ever spoken to, everyone you have ever passed on the street or looked at in the distance, every one of them will be saved by Jesus Christ in a degree of glory and a level of heaven. That is the full message of the “good tidings of great joy which shall be to all people” (Luke 2:10).

The Celestial Kingdom of God

Although almost everyone will eventually be saved by Christ in a kingdom of glory, there are levels and degrees of salvation. To be saved in the celestial kingdom of God requires “obedience to the laws and ordinances of the gospel” (Article of Faith 3). The gateway ordinance to enter the celestial kingdom is authorized baptism (D&C 76:51) and the gateway ordinance to enter the highest degree within that kingdom is temple marriage (D&C 131:1-3). Those who are “just” or faithful in following Christ as members of his true church will eventually be “made perfect through [Christ’s] … perfect atonement” (D&C 76:69, see Elder Jeffrey R. Holland Ensign Nov. 2017).

As Elder Bruce R. McConkie has explained, “Everyone in the Church who is on the straight and narrow path, who is striving and struggling and desiring to do what is right, though is far from perfect in this life; if he passes out of this life while he’s on the straight and narrow path, he’s going to go on to eternal reward in his Father’s kingdom. We don’t need to get a complex or get a feeling that you have to be perfect to be saved. You don’t. There’s only been one perfect person, and that’s the Lord Jesus, … I’m not saying that you don’t have to keep the commandments. I’m saying you don’t have to be perfect to be saved. If you did, no one would be saved …

“What you have to do is stay in the mainstream of the Church and live as upright and decent people live in the Church–keeping the commandments, paying your tithing, serving in the organizations of the Church, loving the Lord, staying on the straight and narrow path. If you’re on that path when death comes … you’ll never fall off from it” (Elder Bruce R. McConkie, Jan 1982, U of U Institute).

Those who inherit the celestial kingdom “shall dwell in the presence of God and his Christ forever and ever” (D&C 76:62) and shall be “gods, even the sons [and daughters] of God” (D&C 76:58).

“Generally speaking, individuals in the terrestrial kingdom will be honorable people “who were blinded by the craftiness of men” (76:75). This group will include members of the Church who were “not valiant in the testimony of Jesus” (D&C 76:79). It will also include those who rejected the opportunity to receive the gospel in mortality but who later received it in the postmortal spirit world (D&C 76:74)” (True to Faith: Kingdoms of Glory).

Those who inherit the terrestrial kingdom will enjoy the presence of Jesus Christ, “but not of the fulness of the Father” and will differ in glory from those in the celestial kingdom “as the moon differs from the sun” (D&C 76:77-78).

The final kingdom of glory, the telestial kingdom, will include those who lived an immoral and dishonest lifestyle in mortality (D&C 76:103). However, before they are prepared to inherit this kingdom of glory they must first face the consequences of their sinful lives by suffering in a condition called hell in spirit prison (D&C 76:84,106). This experience will eventually lead them to “bow the knee and … confess” their sins and through this repentance process be prepared for their resurrection where they will receive a degree of glory and level of salvation (D&C 76:110-111).

As President Joseph Fielding Smith has explained, “Those who enter into the telestial kingdom … are the ungodly, the filthy who suffer the wrath of God on the earth, who are thrust down to hell where they will be required to pay the uttermost farthing before their redemption comes …

“Nevertheless, even these are heirs of salvation, but before they are redeemed and enter into their kingdom, they must repent of their sins . . . and bow the knee, and acknowledge that Jesus is the Christ, the Redeemer of the world” (President Joseph Fielding Smith, Doctrines of Salvation, 2:22)

Those who inherit the telestial kingdom “shall be servants of the Most High; but where God and Christ dwell they cannot come, worlds without end” (D&C 76:112). Although they will never have the privilege of advancing to a higher kingdom of glory where they can dwell with Heavenly Father and Jesus Christ, yet we are told that the glory they will enjoy in their heaven “surpasses all understanding!” (D&C 76:89). Even those in the telestial kingdom will enjoy a level of eternal happiness and salvation through their Savior Jesus Christ which is beyond our mortal comprehension!

As the Christian world celebrates Christmas, may we as Latter-day Saints remember that we have additional “good tidings” about the Savior to share with the world. We proclaim with all Christians that the same Jesus who was born in a manger also died on a cross and rose from the dead to be our Savior. And we add to that message the additional good news that Jesus Christ is the universal savior of all mankind. That through his atonement, “all men [and women] are saved from death, hell, the devil, and endless torment” to inherit a degree of glory and level of eternal salvation (Elder Bruce R. McConkie, Ensign May 1985). He is a much bigger savior than we recognize! Truly, the angel was right when he declared, “I bring you good tidings of great joy, which shall be to all people” (Luke 2:10, emphasis added).

Thanks for a great positive Christmas Gift and the best gift is yet to come.