What is God Trying to Tell You? Turn Aside and See | Meridian Magazine 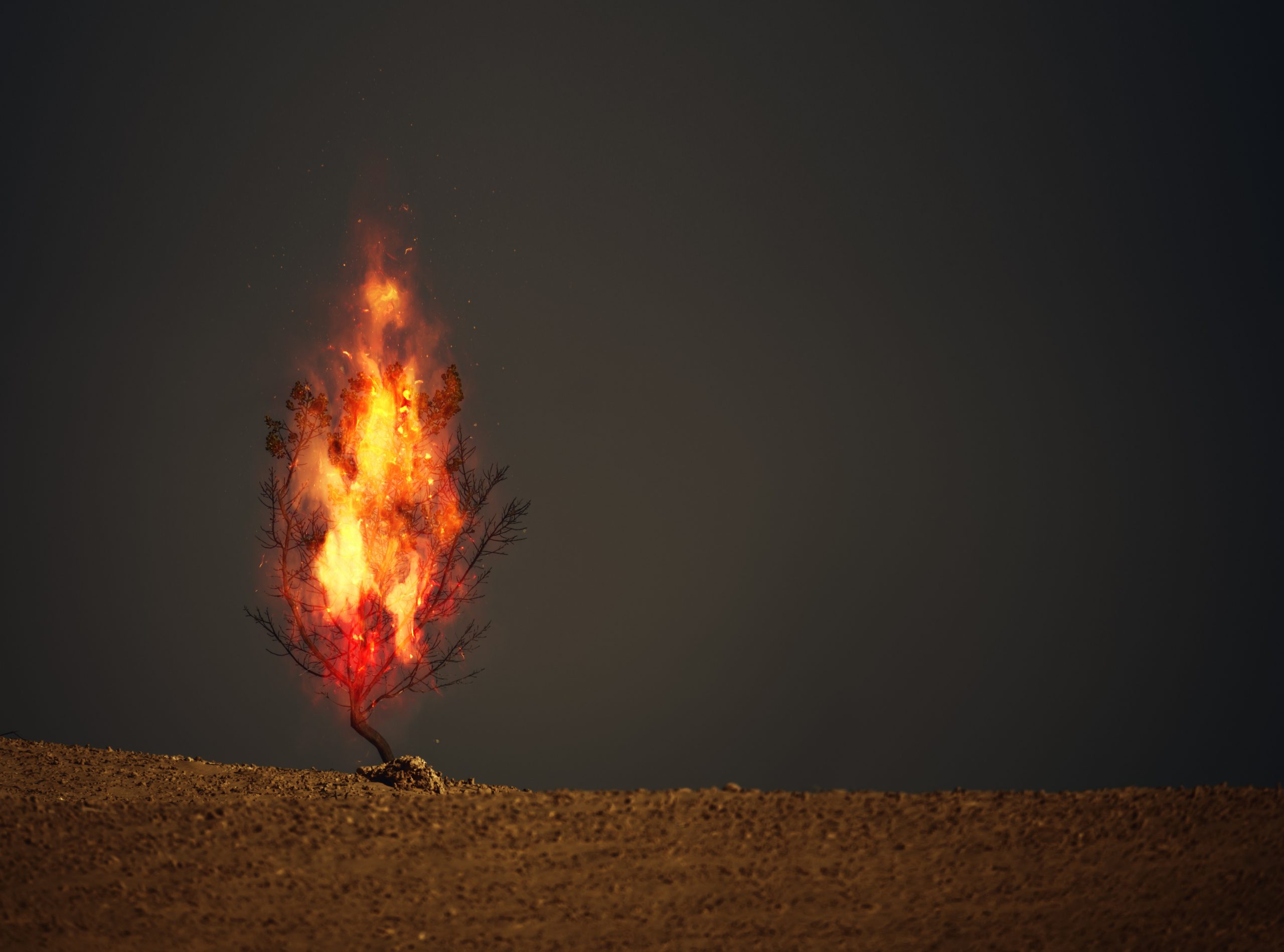 What is God Trying to Tell You? Turn Aside and See

He may have led his flock near Mount Sinai a thousand times during his forty years as a shepherd, but this day was different. Moses noticed something he had not seen before:

“Now Moses kept the flock of Jethro his father-in-law… and he led the flock to the backside of the desert, and came to the mountain of God…And the angel of the Lord appeared unto him in a flame of fire out of the midst of a bush and he looked, and behold, the bush burned with fire, and the bush was not consumed. And Moses said, I will now turn aside, and see this great sight, why the bush is not burnt. And when the Lord saw that he turned aside to see, God called unto him out of the midst of the bush…” (Exodus 3:1-4, emphasis added)

Moses’ attention was caught by a burning bush and he followed a “nudge” to examine it more closely. After the Lord “saw that [Moses] turned aside to see,” He called out to him. Acting on a spiritual nudge precipitated a life changing encounter with God and led to the eventual liberation of the Israelite nation from Egyptian bondage.

I’ve been wondering about this story: Does this account describe the first time the bush appeared to burn, or had it happened before, and Moses missed it? Had he previously passed by the bush with his eyes averted, attention focused on a stray animal, or his mind preoccupied with family concerns? How long had the Lord been trying to capture His attention? How many times has the Lord tried to capture yours?

I recently heard the following experience: Diane had plans for the evening. She was to attend a wedding reception in Springville, Utah–a forty-minute drive from her home in Sandy. After entering the event address into her GPS, she headed for her destination. But there was a hitch: as she sped toward the freeway, the fastest route to Springville, the voice from her navigation system announced, “Rerouting!” Obviously, it was an error. Diane continued on her familiar course toward I-15. “Rerouting!” stated the voice again. Glancing at the map on her dashboard display, Diane could see that the GPS was showing a path over Traverse Mountain. “Why on earth is it trying to lead me over a mountain?!” she wondered. Frustrated, she ignored subsequent pronouncements of “Rerouting!” and finally reached the freeway.

Minutes later, mired in bumper-to-bumper traffic, it was evident to Diane why the GPS had tried to redirect her over the mountain. A car accident had occurred on southbound I-15, closing down traffic lanes and causing major slowdowns. What should have been a forty-minute drive to the wedding reception ended up taking ninety minutes, giving Diane plenty of time to stew in her vehicle, recognizing parallels between her navigation system and an all-seeing Heavenly Father who sometimes tries to reroute His children for their good.

How often do we feel “nudged” to do something unexpected–like being rerouted to an unlikely road–but ignore the prompting because it makes no sense to our finite mind? It takes practice, and sometimes courage, to recognize and follow nudges from One who sees the bigger picture and is directing us to a route that will benefit us more than the path we’re currently pursuing.

I once purchased a weekly planner with a blue vinyl cover. At the top of each page was printed a brief inspirational quote, one of which was attributed to television broadcast journalist Diane Sawyer. Her succinct words have stayed with me for decades: “…there is no substitute for paying attention.” (1)When a thought, however small, persists in your mind, pay attention! Consider that it might be the Holy Spirit nudging you. Examine the thought prayerfully to determine if it is coming from a divine source. As Moses learned, “turning aside to see” can sometimes change the course of a life in a dramatic way.

What might the Lord be nudging you to do?  Here are a few possibilities:

In The Book of Mormon we read about Amulek, who confessed, “I did harden my heart, for I was called many times and I would not hear; therefore I knew concerning these things, yet I would not know.” (Alma 10:6) Eventually, the Lord got Amulek’s attention and the course of his life was altered.

Many years ago, I received a prompting to do something completely off my radar and out of my comfort zone. I stood in my bathroom one morning curling my hair when a distinct phrase came into my mind: “You should write a book.” What? Where did that come from? I dismissed it as a random thought because I was definitely not a writer. I continued fixing my hair, but again the thought came: “You should write a book.” I responded like Diane did when her GPS tried to reroute her over a mountain: Ridiculous!

For several minutes the nudge to write a book persisted. Rolling my eyes, I finally set down my curling iron and stalked into my bedroom where I located some paper and jotted down the phrase and the date, hoping the preposterous thought would then leave me alone. But the moment I scribbled “You should write a book,” my mind was flooded with ideas of what I could write about–I couldn’t capture them fast enough. What on earth was happening? I, who struggled to compose a simple thank you note, was receiving an undeniable prompting to write.

For several months, I kept this experience to myself because it seemed absurd to tell anyone about my nudge from the Lord. It made zero sense. But the nudges kept coming, so I finally visited my mother and confessed what I was feeling prompted to do. She took it very seriously and counseled me to do the same, saying that since it wasn’t a thought I would ever have had on my own, it must be from God. When I stated the obvious–that I wasn’t a writer and didn’t have even the vaguest idea where to start–Mom seemed confident that if the Lord had inspired me to write a book, He would show me the way. And that’s exactly what happened.

I left my mother’s house that day determined to act in faith. Stopping by an office supply store, I purchased a beautiful padded binder, ruled paper, and a set of my favorite pens. After returning home, I inserted the paper into the binder, wrote down my commitment to follow the promptings I had received, then sat there at my desk with no clue how to proceed. But as I prayed for help, I remembered the ideas that had flowed into my mind the day I was first inspired to author a book. I retrieved that list, chose a topic, and awkwardly wrote my first sentence.

I can’t say that I became a brilliant writer, but I can testify absolutely that from the day I acted on the prompting I had received, God planted in my heart a desire to write that had never been there before. Suddenly I was eager to put my thoughts on paper. My notebook became my constant companion. I wrote when I was at the park, the lake, my daughter’s Junior high choir room, in line at the grocery store, and in my car.

Once I had several chapters written, the Lord began to raise up friends to help me. Two ladies became my cheerleaders. After I confided that I was working on a book, they continually encouraged me to keep writing even when my confidence was shaky. Another woman contacted me after hearing that I was writing. She was earning an editing certificate from a local university and needed a project to edit. She offered to edit my manuscript free of charge. Her expertise was heaven sent, and her kindly given critiques helped me address the weakest areas of my writing. Through a miracle, I was connected with two experienced authors who invited me to meet with them and share some of my chapters. Their encouragement gave me the confidence to eventually submit my manuscript to a publisher.

The process of writing a book and getting it published took years* but from start to finish it was a great blessing to me spiritually and has opened other unexpected doors. I learned firsthand that when we act in faith on a nudge from the Lord–even when we don’t fully understand it–He will provide the spiritual gifts and support we need. I share this story with the hope that it may inspire you to embrace your own promptings from the Lord and dare to “turn aside and see” what He has in store for your life.

“Trust in the Lord with all thine heart; and lean not unto thine own understanding. In all thy ways acknowledge him, and he shall direct thy paths.” (Proverbs 3:5-6)

*Lynne’s book can be found at:

You've done it again, Lynne. I always enjoy your articles, and this is no exception. Thanks for sharing your gifts!

This is a topic I've wondered about for a long time - how many nudges have I missed because I am too "busy" to hear. Your article has inspired me to listen better and actually follow through on my nudges. Thanks!