When a Prophet Faced a Bomb Threat | Meridian Magazine 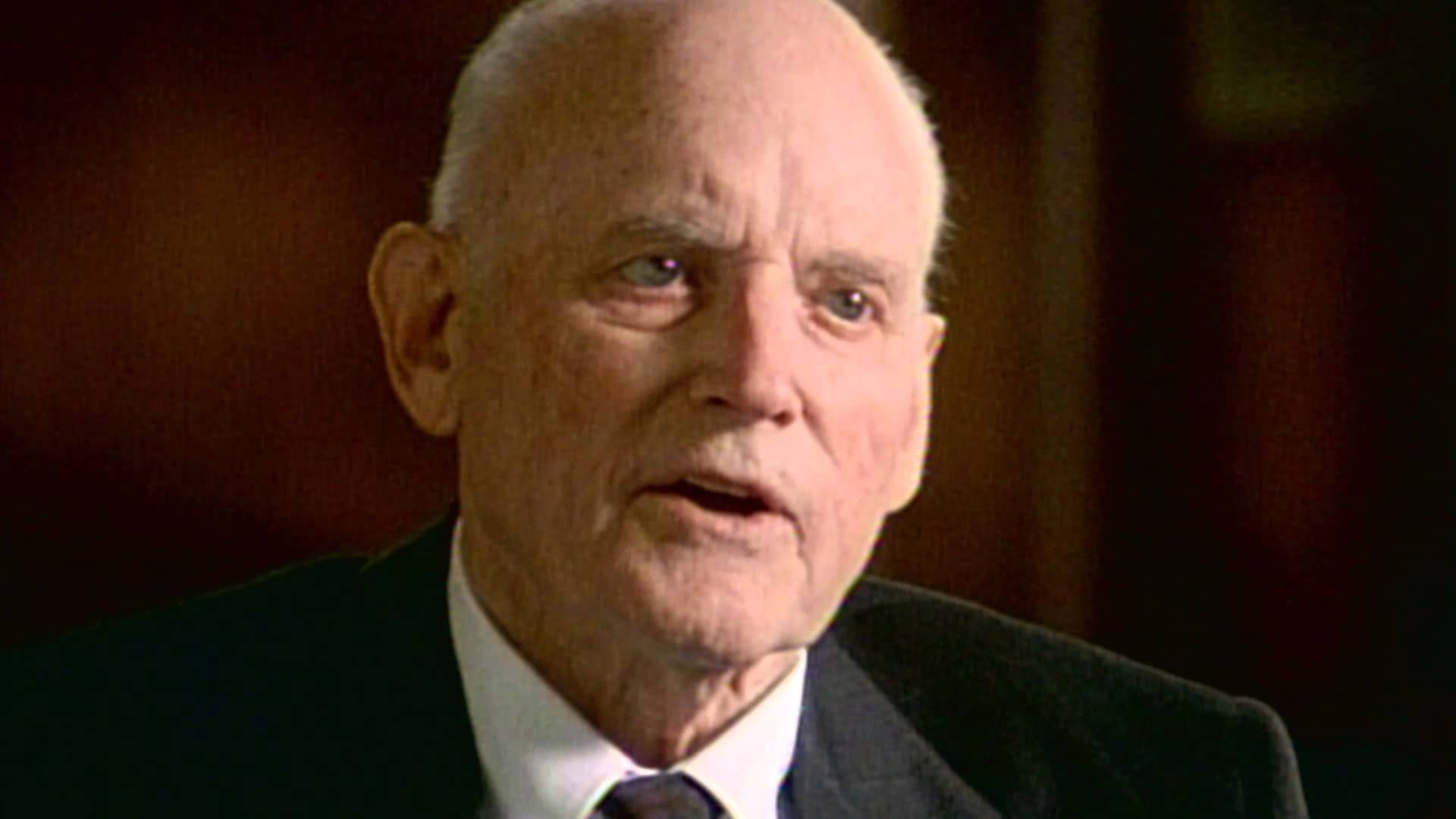 When a Prophet Faced a Bomb Threat

On February 7, 1993, Howard W. Hunter, then President of the Quorum of the Twelve Apostles, was the main speaker at a CES fireside being broadcast from the Marriott Center at BYU. The evening began in the expected way, with an opening song and an eager crowd, many of whom were probably poised with pen in hand ready to take notes and learn from an apostle of the Lord.

After being formally introduced, Howard W. Hunter approached the pulpit and, within less than a sentence of sharing his address (on the topic of adversity), screams were heard from the audience. A 27-year-old man had jumped the security barrier and run onto the stage, carrying a briefcase and brandishing what appeared to be a detonator. He shouted to the audience that he had a bomb and they had to do what he said.

The live broadcast of the fireside was immediately cut off, so the footage is limited, but it’s truly a shocking moment even to partially witness:

The young man approached President Hunter and told everyone else to clear the stand, which they did, except for two church security officers that refused to leave President Hunter’s side. The assailant then presented a letter and demanded that President Hunter read it to the audience of 17,000 who watched helplessly, with bated breath.

President Hunter remained perfectly calm throughout. He would not read the letter, which supposedly called for the release of the current prophet and apostles and declared this threatening young man as the new prophet to lead the Church.

This man and his dynamite continued to demand, but this ordained servant of the Lord flatly refused.

Then the congregation began to sing.

The boisterous melody of “We Thank Thee, Oh God, For a Prophet” probably began quietly at first, but likely soon filled the auditorium. The hymn distracted the assailant long enough for two audience members to attempt to help subdue him, one of whom had pepper spray. Moments later, the Church security officers were able to pull the man off the stage where 40-50 students converged on him. He was arrested and removed from the area.

The bomb that he seemed to be carrying turned out to be a briefcase full of mostly books; the detonator a toy phone wrapped in black tape.

So, what can we learn from Howard W. Hunter and how he handled himself in this moment of greatest alarm?

The danger turned out to ultimately be exaggerated, even innocuous, but like so many of our favorite heroes from the scriptures, he didn’t know in the moment that it would be. He looked into the face of terror and potential death and would neither deny his faith nor even demonstrate any fear. He trusted in the Lord. Do we trust in the Lord like that?

Our world is teeming with natural disasters, political polarization, terrorism, threats of war, and many other kinds of calamity. Sometimes we are directly in the path of it and sometimes we are not. Either way, can we, as Howard W. Hunter did in that moment, look into the face of terror, or flood, or fire and say to ourselves, “I know in Whom I have trusted”?

It is tempting, when serious difficulties enter our lives, especially when we feel we are doing everything we can to keep the commandments and live worthy of the blessings of the Lord, to feel that maybe Heavenly Father is not all that we thought that He was. I am praying for things to be easier and they seem to be getting worse, so how likely is it that someone is hearing my prayers?

The Lord needs us to be more than fair weather friends. We cannot have faith only when things are going well and as expected. We have to be valiant defenders of righteousness especially when the hardest challenges are in our very own camp.

In Doctrine and Covenants 6:34, the Lord tells us “Therefore, fear not, little flock; do good; let earth and hell combine against you, for if ye are built upon my rock, they cannot prevail.” He doesn’t promise that if you are built upon His foundation, earth and hell will never combine against you. Keeping the commandments will not keep you free from adversity or sorrow. But He does promise that when those obstacles enter your life and seem to beat your down with more power than you can match, they absolutely will not succeed; even if it feels at times like they already have.

When the bomb threat was resolved, that February night in 1993, the fireside proceeded. They re-introduced President Hunter and he started again adding this time, “I want to tell you how good your voices sound.”

He then proceeded with the address he had prepared which turned out to be perfectly suited for what all who were in attendance had just witnessed.

“Life has a fair number of challenges in it,” he began, and then smiled as the audience allowed themselves tension-relieving laughter and through a grin he added, “as demonstrated…”

He went on to highlight a few of the serious global challenges that were facing people in the early 90s. He mentions famine in Somalia and war in the former Yugoslavia and in the Middle East and in India and in Ireland. It is eye opening for us now to be reminded that though things these days can sometimes feel as bad as they’ve ever been, every era has its calamities. His words of encouragement aimed at the students that night are still important and true for us to remember today.

“In my lifetime I have seen two world wars, plus Korea, plus Vietnam and all that you are currently witnessing. I have worked my way through the Depression…I have seen stock markets and world economics go crazy, and I have seen a few despots and tyrants go crazy, all of which caused quite a bit of trouble around the world in the process. So I hope you won’t believe all the world’s difficulties have been wedged into your decade, or that things have never been worse than they are for you personally, or that they will never get better.”

“Contrary to what some might say, you have every reason in this world to be happy and to be optimistic and to be confident. Every generation since time began has had some things to overcome and some problems to work out. Furthermore, every individual person has a particular set of challenges which sometimes seem to be earmarked for us individually. We understood that in our premortal existence…even in the most severe of times, anciently or in modern times, those problems and prophecies were never intended to do anything but bless the righteous and help those who are less righteous move toward repentance.”

I’ve begun to think more and more lately about how disappointed I would ultimately be if God always cleared my path of difficult things. We came to this earth to grow strong and fearless and be proven in ways that we couldn’t be where we were before. Imagine getting to the end of it all and realizing that you’d barely grown at all; going through all of mortality and coming out the other side about how you started. What a let down that would be.

He will not take our growth opportunities away, but instead will lead us directly to the things that will shape us into our best, most joyful selves. Knowing that means that when our most threatening trials jump the security barrier and storm the stage telling us to give up on our testimony or stop trusting in the Lord, we can follow President Hunter’s example and refuse to comply. In that moment we are not looking at danger, we are looking at the initiators of our better selves. Times fraught as ours are what make servants as bold and true as we will be.

Quoting from the prophet Joseph Smith, President Hunter concluded his remarks that evening by saying, “He said about our time—yours and mine—that ours is the moment ‘upon which prophets, priests and kings [in ages past] have dwelt with peculiar delight; [all these ancient witnesses for God] have looked forward with joyful anticipation to the day in which we live; and fired with heavenly and joyful anticipations they have sung and written and prophesied of this our day; … we are the favored people that God has [chosen] to bring about the Latter-day glory.’ (History of the Church, 4:609–10.) What a privilege! What an honor! What a responsibility! And what joy! We have every reason in time and eternity to rejoice and give thanks for the quality of our lives and the promises we have been given.”

Let us not forget the blessings that we have. Let us not forget that we are in the fullness of times and that many have looked forward to this day. Most of all, let us look into the inevitable face of calamity and terror and calmly refuse to let it shake our foundation or our faith.

I was in the MTC when our teacher told us about her experience of that night . At first we were struck with what ? Did this really happen? Then as we listened to her recalling back what she saw . She said all she could see was someone had a bomb and wanted him to read it , as the crowd started to sing we thank thee oh God for a prophet , she could see the men moving all at one time to jump the man and , we laughed when she said he had no choice when it looked like 20 ,large men mabe the foot ball team piled on top him . ( Angels in suits that’s what I think ) . I am glad to remember this I know Angels are among us .

We thank God for a Prophet.