What Does it Matter that the Lord was Wrapped in Swaddling Clothes? | Meridian Magazine 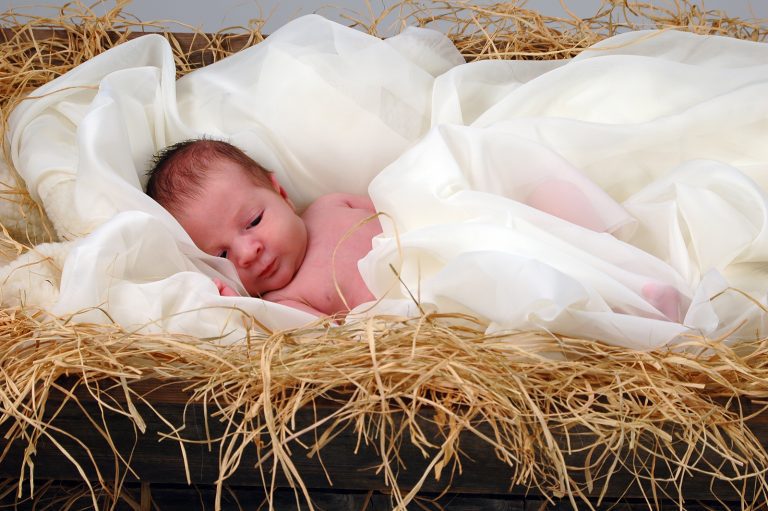 What Does it Matter that the Lord was Wrapped in Swaddling Clothes?

When those shepherds, “abiding in the field keeping watch over their flock by night” received the grand announcement from the angel of the Lord, “for unto you is born this day in the city of David a Savior, which is Christ the Lord,” they were also told that there would be a sign that they might recognize the baby when they found Him.

Ancient Jewish and Greek sources…indicate that wrapping an infant in [swaddling clothes] was common, ordinary, and meaningful. On the night that Jesus was born, the angel told the shepherds that if they would go looking in Bethlehem, they would find ‘the babe wrapped in swaddling clothes, lying in a manger’ (Luke 2:12). And they went quickly and indeed found the babe ‘lying in a manger’ (Luke 2:16), but here the swaddling clothes are not mentioned. The angel had told the shepherds that something about this whole situation would be a “sign” (Luke 2:12). So, it is reasonable to ask, what is so significantly indicative here? It would probably not have been unusual to find a newborn baby in Bethlehem. And, it would not have been remarkable to find a baby wrapped in swaddling clothes. But to find a newborn in a manger, that would be very unusual and therefore singularly significant. After all, how many newborns are placed in a phatnē, most likely a feeding trough for cattle, oxen, goats and sheep?

As far back as the time of Ezekiel in the sixth century B.C., swaddling was referred to as an indication that a baby was properly cared for. In Ezekiel 16:4, the Lord speaks to Israel about the abandoned and desperate condition in which He had found his people, saying “And as for thy nativity, in the day thou wast born thy navel was not cut, neither wast thou washed in water to supple thee, though wast not salted at all, nor swaddled at all.” In that allegorical description, the baby was cast out into an open field, unwanted and exposed, and the lack of salting (for drying and cleansing) and swaddling was a sure sign that the baby had been legally abandoned and could be claimed. This is evidence that swaddling was normal and significant well back into the ancient history and customs of Israel.

Swaddling bands are also used metaphorically of the creation of the earth in Job 38, speaking of the time in heaven when the morning stars and all the sons of God shouted for joy. As part of that creation, God reigned in the primordial sea, as if the earth had broken the waters within the womb as it was coming forth in birth (Job 38:8), and then God wrapped the earth overhead in the cloud or firmament between heaven and earth, when He “made the cloud the garment thereof, and thick darkness a swaddlingband for it” (Job 38:9). Here, God serves as a father, providing his creation with the kind of loving care and parental obligation that would have been commonly understood to be the first token of acceptance and validation given to a newborn by its lawful parents. Thus, when Mary wrapped Jesus in swaddling bands, this sends recognizable signals to all in their culture that this baby, who has come down as a creation of God, is wanted, owned, embraced, and is being fully cared for. Mary and Joseph were prepared at the time of the birth, having brought to the stall these bands in which to tightly bundle and gratefully receive the infant Jesus.

In contrast to Matthew, Luke the physician informs us that Mary wrapped Jesus in “swaddling” clothes. These clothes consisted of strips of cloth tied together so as to be wrapped around an individual as one would wrap a wound in a gauze bandage. Indeed, the Hebrew word, of which “swaddling” is the English translation, denotes cloths used in the binding of broken limbs (Ezekiel 30:21). This symbolically relates to Christ’s ministry of healing the spiritually broken (Ezekiel 34:15–16; D&C 138:42). The use of swaddling clothes evokes two images.

First is the representation of parental care and compassion. These bands provided the child with warmth, protection from extremes of temperature, and a sense of security. As this pertains to Christ, certainly the Father was ever watching over His Firstborn Son. In the end, however, it is Christ who warms, protects, and offers security to us. It is Christ to whom numerous nurturing emblems are applied (Luke 13:34; 3 Nephi 10:6; D&C 10:65). It is Christ who is the Father of our salvation and who entered Gethsemane that He might “know according to the flesh how to succor his people according to their infirmities” (Alma 7:12). Numerous commentators, ancient and modern, have seen significance in the Savior’s first clothing. For example, Gregory Thaumaturgus, a third-century Alexandrian Father, wrote: “She wrapped in swaddling-clothes Him who is covered with light as with a garment (Psalm 104:2). She wrapped in swaddling-clothes Him who made every creature. . . . She wrapped Him in swaddling-clothes who binds the whole creation fast with His word.” 29 Presbyterian commentator Matthew Henry wrote: “He was wrapped in cloths . . . as if he could be bound, or needed to be kept straight.”30

Second is the resemblance of swaddling clothes to the clothing of the deceased. Luke’s emphasis on Christ’s having been wrapped in these strips (commonplace in the world of a physician) may have been to emphasize that this child was born to die. One source noted, “The bonds uniting life with death, where man is concerned, are represented by swaddling clothes (echoed by the bandages that swaddle a corpse).”31 The language used to describe the scene of Jesus’ birth seems deliberate and calculated to foreshadow His death. Jesus is said to be wrapped in cloth strips and placed in a manger (or in a cave) because there was no room for Him in the inn. But upon His death we are told that He was wrapped in linen cloths and placed in a rock-hewn tomb, where no one had yet been laid. Clearly, the language of His birth mirrors or foreshadows the language of His death.

I recently learned of another exciting insight to add to this beautiful article. I may have some of the details a tad off, so correct and forgive my errors, but as I understood it, the shepherds would have been the shepherds that cared for the sheep that were used for the temple sacrifices in Jerusalem. They would take the first born male lambs and clean them off in a manger with special swaddling cloths given them by the temple priests. Those special lambs were for passover. Jesus IS the passover lamb. When the shepherds saw Jesus in a manger (it would have been stone) wrapped in swaddling clothes used for sacrificial lambs prepared for sacrifice, that was how they knew HE, the baby, was the fulfillment of Isaiah 53. That is why it was a sign to them.

From the book Beloved Bridegroom by Donna Nielson: Meanwhile, the bride was also busy making preparations for her future and the new life she would share with her husband. There was wedding clothing to prepare, including much elaborate colorful embroidery. Swaddling bands were also to be embroidered with symbols indicating family history and genealogy. According to ancient and modern custom, the embroidery, to be acceptable, must be exactly the same on both sides. This was a type showing that the outward life and the inner life were the same-they were never to have a "wrong side" to their character. Under the wedding canopy, these decorated bands would be tied around the clasped right hands on the bride and groom; hence the saying, "They tied the knot." These bands would later be used to fasten the swaddling clothes of their children. Nielsen, DOnna. Beloved Bridegroom . Onyx Press. Kindle Edition. Location 551