We Are Witnessing the Fulfillment of Prophecy | Meridian Magazine 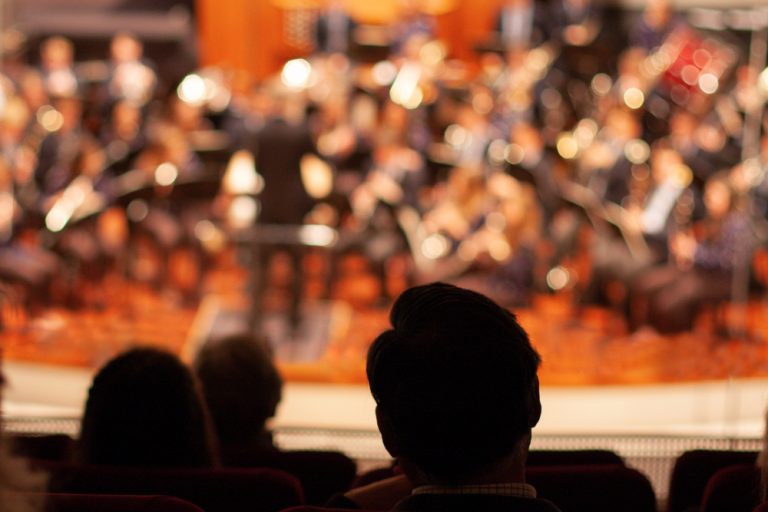 We Are Witnessing the Fulfillment of Prophecy

When I was a docent in the Church History Museum, sometimes a visitor would ask for a copy of the Book of Mormon. I would go to the front desk, get a copy, and ask if he or she had two minutes for an overview. I would hold up the cover and say: “The Book of Mormon is named after the prophet Mormon who abridged records kept by ancient prophets who lived in America from 600 B.C. to 400 A.D. The subtitle is “Another Testament of Jesus Christ” because He, Jesus Christ, was the central focus of these ancient people’s lives.”

By this time, I would have turned to the painting of Jesus in the front pages of the book. Then turning through a few more paintings, I’d stop on the painting of Christ in America and continue. “About two-thirds of the way through the book is the account of Jesus Christ’s ministry among these people after His resurrection.” Then I’d finish with Moroni’s promise in Moroni 10:3-5 and add a caution: “As in the Bible, there are chapters written by Isaiah in the Book of Mormon. Many people get bogged down in Isaiah and stop reading. I encourage you to keep pushing through Isaiah, or you can just skip those chapters.”

Now that we have finished five weeks of studying Isaiah as a Church, I have had confirmed to me that I had no faith in Nephi’s words that Isaiah’s words would be “of great worth unto them in the last days; for in that day shall they understand them” (2 Nephi 25:8). I feel guilty that I spoke those faithless words to museum visitors. Obviously, I hadn’t done my part to fulfill Nephi’s prophecy in my own life. Did I pray to understand Isaiah? Not much. Did I read Isaiah carefully? Not carefully enough. Did I appreciate Isaiah’s gift as a poet? No, although I knew George Frideric Handel made Isaiah’s words exquisite when set to inspired music.

I had an experience a few years ago that showed me how enthusiastic I should be about Isaiah’s words. Richard and I were on a business trip. The CEO and his wife took us to the symphony. The closing number was Handel’s “Hallelujah” chorus. As the familiar strains filled the ornate hall, people began to stand. The CEO stayed seated and said to me in a begrudging voice, “Why do people stand for this piece just because some king stood hundreds of years ago?” He was referring to the traditional story that at the London premiere in 1743, King George II stood, followed by the rest of the audience. Some say he might have stood because of fatigue after having sat for so long and that the audience stood in deference to the king.

I think King George and the people felt the power of the words and music and were standing in honor of the King of Kings, Lord of Lords. Doreen Rao, a distinguished conductor gave her reason why the people stood: “I think it’s because everyone who performs it takes complete and passionate ownership of the music’’ (https://floridaorchestra.org/messiah). When the musicians are passionate, the audience feels the power of the words and music with increased intensity. I said to the CEO, “We stand in honor of Jesus Christ.” He leapt to his feet.

This is the passion I feel has been injected into the Church by studying Isaiah in five weeks of “Come, Follow Me.” Isaiah has been made more approachable and understandable, and our children will grow up without the associated negativity. (I listened to three podcasts on Isaiah and everyone told the joke of how the Book of Mormon saved a missionary who was shot because the bullet lodged in the Isaiah passages of 2 Nephi. The punchline: Not even a bullet can get through Isaiah.) As our children study with their families and in Primary, his words will become familiar.

In four years when we again study the Old Testament, today’s four-year-olds will be eight, and the eight-year-olds twelve, and the twelve-year-olds sixteen, and Isaiah will become more and more clear. My change of heart came when I took seriously the Savior’s words to the Nephites: “Search these things diligently; for great are the words of Isaiah” (3 Nephi 23:1, italics added). I stand humbled at how much I have learned from and about Isaiah. Here are several ideas that have helped me:

I began to read the chapter headnotes, which give novice readers clues as to the topic. One example: The headnote to Isaiah 1 reads: “The people of Israel are apostate, rebellious, and corrupt; only a few remain faithful—The people’s sacrifices and feasts are rejected—They are called upon to repent and work righteousness—Zion will be redeemed in the day of restoration.”

My understanding increased when I realized how often Isaiah quotes the Lord. In the first chapter of Isaiah there are thirty-one verses and half are the words of Jesus Christ. Some chapters are almost completely in the Savior’s words, such as chapters 54- 58 for example. The first five verses of chapter 48 provide another example. The Lord’s words are in bold type:

1 Hear ye this, O house of Jacob, which are called by the name of Israel, and are come forth out of the waters of Judah, which swear by the name of the Lord, and make mention of the God of Israel, but not in truth, nor in righteousness.

2 For they call themselves of the holy city, and stay themselves upon the God of Israel; The Lord of hosts is his name.

3 I have declared the former things from the beginning; and they went forth out of my mouth, and I shewed them; I did them suddenly, and they came to pass.

4 Because I knew that thou art obstinate, and thy neck is an iron sinew, and thy brow brass;

5 I have even from the beginning declared it to thee; before it came to pass I shewed it thee: lest thou shouldest say, Mine idol hath done them, and my graven image, and my molten image, hath commanded them.

3 Behold, I have declared the former things from the beginning; and they went forth out of my mouth, and I showed them. I did show them suddenly.

4 And I did it because I knew that thou art obstinate, and thy neck is an iron sinew, and thy brow brass;

5 And I have even from the beginning declared to thee; before it came to pass I showed them thee; and I showed them for fear lest thou shouldst say—Mine idol hath done them, and my graven image, and my molten image hath commanded them (1 Nephi 21:5).

I also found increased understanding when I read slowly with intent to understand, not just to get through. When I don’t understand how a word or phrase is used, I look up the definition. In the passage above, I found definitions for: holy city—Jerusalem; obstinate—stubborn; stay themselves—pretend to rely on; mention—with lips but not the heart; former things—foreknowledge of God; neck—stiffnecked; iron sinew/brass brow—a prideful person.

I saw how Isaiah uses repetitions, synonyms, and images for artistry. In the passage above he used: mine idol, my graven image, my molten image are all in the same verse. In the verse below, is another example of how his images often come in threes:

The verse that follows is an expanded metaphor with nine words to convey one idea: “Who hath measured the waters in the hollow of his hand, and meted out heaven with the span, and comprehended the dust of the earth in a measure, and weighed the mountains in scales, and the hills in a balance” (Isaiah 40:11-12)?

Here is an example of repetitions from 1 Nephi 21:1: 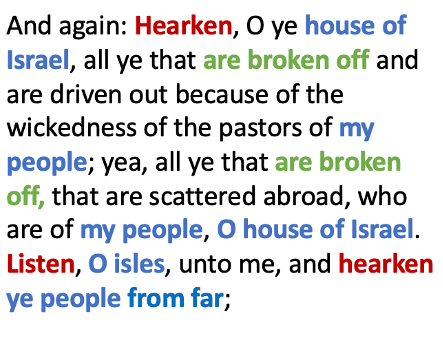 There are also many repetitions of concepts. 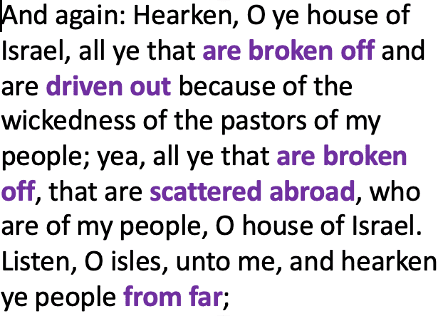 I went online to a modern translation of the verse above by Avraham Gileadi who condensed 59 words to eight: “Hear me, O isles; listen, you distant peoples,” which is what is left when the repetitions are removed.

The podcasts I listened to taught me several more things to be aware of: multiple fulfillments from one prophecy, dual meanings of geographic names, names of rulers and peoples, and items in Isaiah’s environment that were familiar to him. Some of these can be found in the footnotes.

Isaiah excels in detail as well as teaching broad concepts. From him I learned that prophecy is God’s way of validating His prophets. Prophecy tells of a future event using a three-step process: the prophet prophesies, time passes, and the event occurs. In this way, Isaiah taught the difference between prophets and idols to the idol-worshipping people of his time. Of course, idols are incapable of prophecy, but idol worshippers would give their idols credit for good things that happened. Isaiah said of himself: “And I have even from the beginning declared to thee; before it came to pass, I showed them thee; and I showed them for fear lest thou shouldst say—Mine idol hath done them” (Isaiah 48:4, italics added).

Isaiah’s prophecies are a paramount reason to become acquainted with Isaiah. He prophesied of the scattering and gathering of Israel, the Restoration, the coming forth of the Book of Mormon, the Second Coming, and the life and ministry of Jesus Christ. These are the last days and Isaiah’s prophecies are being fulfilled. May we study Isaiah and his prophecies so we will know when they are fulfilled.

Beautiful. I too have had my understanding enlarged through the Come, Follow Me study of Isaiah. What a gift these last few weeks have been!