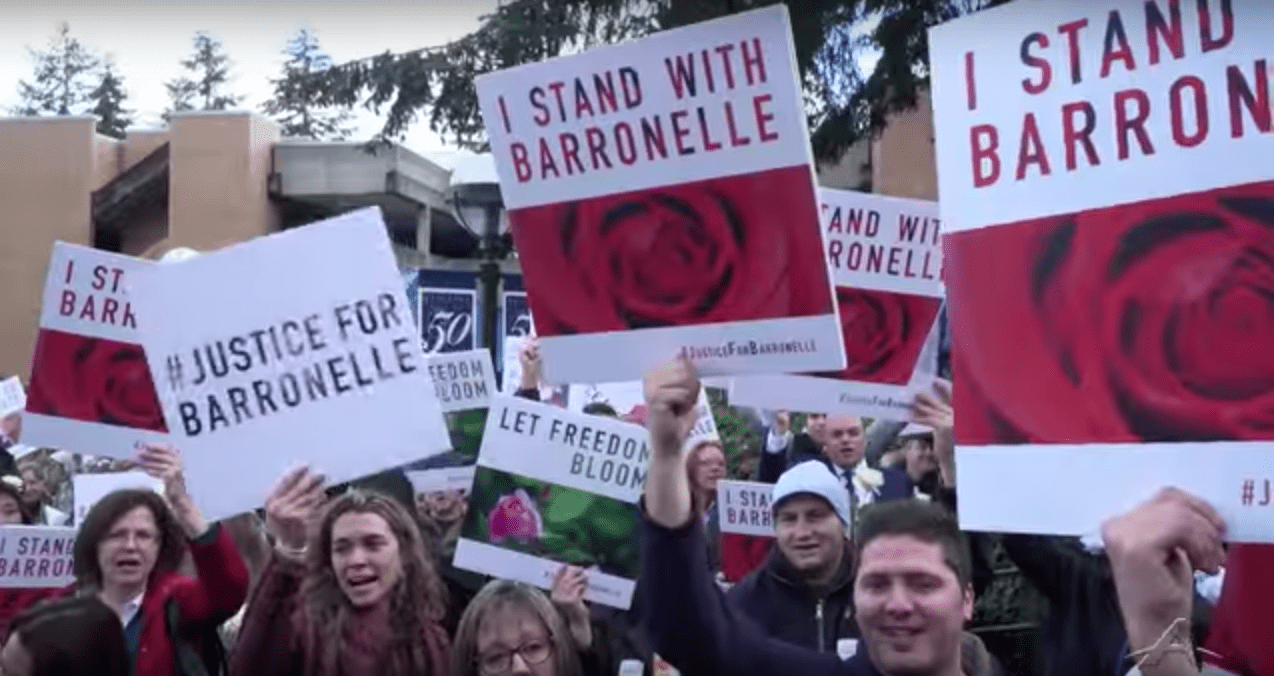 The following was published by the Alliance Defending Freedom.

OLYMPIA, Wash. – A Washington floral artist says she will ask the U.S. Supreme Court to reverse a decision Thursday by the state’s high court that concluded that the government can force her—and, by extension, other Washingtonians—to create artistic expression and participate in events with which they disagree.

“This case is about crushing dissent. In a free America, people with differing beliefs must have room to coexist,” said ADF Senior Counsel Kristen Waggoner, who argued before the court together with co-counsel George Ahrend in November of last year. “It’s wrong for the state to force any citizen to support a particular view about marriage or anything else against their will. Freedom of speech and religion aren’t subject to the whim of a majority; they are constitutional guarantees.”

“Our nation has a long history of protecting the right to dissent, but simply because Barronelle disagrees with the state about marriage, the government and ACLU have put at risk everything she owns,” Waggoner continued. “This includes not only her business, but also her family’s savings, retirement funds, and home. It’s no wonder that so many people are rightly calling on President Trump to sign an executive order to protect our religious freedom. Because that freedom is clearly at risk for Barronelle and so many other Americans, and because no executive order can fix all of the threats to that freedom, we will ask the U.S. Supreme Court to hear this case and reverse this grave injustice.”

A lower court ruled that Stutzman must pay penalties and attorneys’ fees for declining to use her artistic abilities to design custom floral arrangements for a long-time customer’s same-sex ceremony. Rather than participate, Stutzman referred Rob Ingersoll, whom she considers a friend and had served for nearly 10 years, to several other florists in the area who were comfortable promoting and participating in their ceremony. The two continued to chat about the wedding, they hugged, and Ingersoll left.

“Rob Ingersoll and I have been friends since very nearly the first time he walked into my shop all those years ago,” said Stutzman. “There was never an issue with his being gay, just as there hasn’t been with any of my other customers or employees. He just enjoyed my custom floral designs, and I loved creating them for him. But now the state is trying to use this case to force me to create artistic expression that violates my deepest beliefs and take away my life’s work and savings, which will also harm those who I employ. I’m not asking for anything that our Constitution hasn’t promised me and every other American: the right to create freely, and to live out my faith without fear of government punishment or interference.”

In addition to Ahrend, attorney John “Jack” Connelly is also counsel of record for Stutzman and her business in the lawsuits, State of Washington v. Arlene’s Flowers and Ingersoll v. Arlene’s Flowers.
Alliance Defending Freedom is an alliance-building, non-profit legal organization that advocates for the right of people to freely live out their faith.
1 Comment | Post or read comments

The animals on George Orwels "Animal Farm" are again raising their ugly heads. I find it absolutely asinine that the government is forcing this woman to go against her beliefs when there are other local florists who will gladly do what she declines to do because of her beliefs. I say, more power to her!