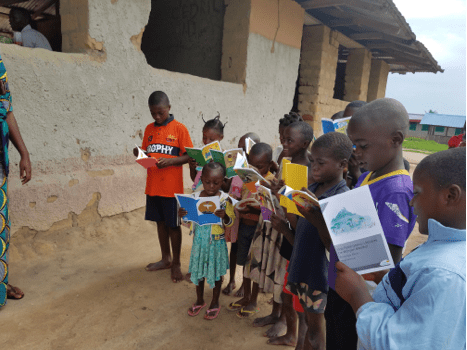 Editor’s Note: The following is the third installment in a series on Margaret Blair Young’s work in the DR-Congo along with her husband and her brother. It explores some of the hard realities they’ve encountered and how they are being addressed not only by the LDS Church but by some remarkable Catholics as well.

When I teach creative writing, I tell students how to structure a short story using the “Momentum, disruption, deflection” framework. This type of story shows the characters in normal situations, unaware that some conflict or calamity is about to interrupt every expectation. “Deflection” indicates that the disruption has changed the characters, has even changed their trajectories.

Disruption is inevitable. It is an essential part of the mortal experience—the precursor to our stretching beyond our inclinations and into our ideals, though it can do the opposite and lead us to shrink. As Elder Neal A. Maxwell said, reflecting on his cancer, “I have learned that not shrinking is more important than surviving.”

In Lodja, the disruption of war had had both consequences. Some people, utterly traumatized, had shrunk into beings concerned only about the next meal. Others, however, had met the disruption with force and a determination to thrive.

Abbe Veron, the Catholic priest I met in Lodja, had built schools in 1997, using a 50,000 euro prize he had won for his dissertation in Lyon, France. The next year, the troops entered Lodja from four different countries. The Rwandan genocide was spreading its dark vision of humanity into the DR-Congo. Young people stripped of any sense of their own humanity were ready to strip others of theirs.

Since Lodja has an airport, these troops used it as a landing spot en route to treasure hunting. (The Congo is one of the most resource-blessed countries on earth.) They stayed for four years. Abbe Veron was a professor in Lyon during this occupation and received news of the horrors.

He returned to his village in 2002, after the troops had departed. All of his schools had been destroyed, his home plundered, many of his friends killed, and the cemetery where his father was buried sold.

He started over—beginning by paying for the education of hundreds of orphans. The schools were built again, though poorly supplied. In 2014, he became the rector of the university in Lodja and started imagining what that campus could be. He envisioned dormitories for students who lived too far away to commute; an amphitheater for theatrical productions, workshops, conferences, films; fully-supplied offices, classrooms.

I saw the beginnings of the campus in August, 2017, and watched the main classroom and the offices go up brick by brick. The other plans would wait until funding became available. In November, I taught in the classroom for a week. The spots of the coming buildings are marked as reminders of what will be. The abbe (father) and his associates are answering the disruption with a vision of the future.

As I contemplate Lodja, I think ­­­­­­­of Joseph of the Old Testament, whose life was cruelly disrupted by his own brothers. We get the outline of Joseph being cast into a pit and then sold to passing Ishamelites, and then of his rise to power in Potipher’s house. We do not get an account of his screaming or weeping when he was removed from all he knew, when he was betrayed by those he thought would protect him. The time of many years is compressed in the scriptures so that a few verses cover whatever despair Joseph experienced as he was falsely accused by Potipher’s wife and then cast into prison. Within a few chapters in Genesis, we see him in his power as his brothers’ deliverer, their own lives having been disrupted by famine. In fact, twenty-two years have gone by from the time when Joseph was cast into a pit until the moment when he reveals himself to those who had betrayed him. Indeed, disruption is as much a theme of the story as is reunion.

Joseph’s story prepares us for the story of Jesus, born in a stable and rejected as one from Nazereth. (“Can any good come out of Nazereth?”) His dearest friends betray him or deny him, and his enemies crucify him. But the resurrected Lord, able to deliver all, is beyond mortal restraints and has already forgiven all who have abandoned or betrayed him. The renewed invitation to follow him comes with the understanding that we will be stretched into new identities, that we will leave our first presumptions of a world which is all about us and our own needs. When we agree to follow Him, we agree to His cross as well as to His glory. We agree to be disrupted, understanding that only through disruption can we go beyond ourselves and into a life where our natural desires are crucified and we are elevated into godly compassion. We may even become deliverers as we recognize divinity in the most lowly of conditions; glory in stables and huts; brotherhood in every human relation.

After I started working with the priest and the several nuns around him, I learned of a nun—Sister Caroline—from Lodja whose life had been utterly disrupted. In her twenties, having already taken her vows, she received a badly administered injection and fell into a coma for several days. When she regained consciousness, she found herself paralyzed from the waist down. It was permanent. Her heartbroken mother died soon thereafter, and the young woman (a former student of the priest) was confined to a wheelchair. Eventually, she was sent to New York—still a nun.

On February 4th, 2018, I had lunch with her (Sister Caroline) and the priest, who had come to the United States for the first time and had a particular desire to see her. She told me about her trials and about her faith. “It might have been easy if I had been born this way,” she said, “but I was born like you—full of life. I could do everything. It has been hard. But God has brought me through it all. ­­­­­­You hear people referring to the god of Abraham, the god of Isaac, the god of Jacob. I want people to learn about the god of Caroline. God has never abandoned me.”

I saw the image of the Savior in Caroline’s countenance. She had recently lost much of the monetary support she had had, but I watched—stunned—as she took cash from her purse for the priest to pay the medical costs of someone in Kinshasa, who had become deathly ill. From her wheelchair, as inconspicuously as possible, she performed this simple act of deliverance.­­­

Meeting Caroline also made me grateful for what some of our team members and Abbe Veron had seen at LDS ­­­­Church Humanitarian Services the week before. There were reports of Church efforts to provide wheelchairs to those crippled from birth or those whose lives had been disrupted by a paralyzing accident or disease. At one point of the tour, he saw a sturdy wheelchair and told us about two of his crippled parisheners who literally crawled to Mass every week. The idea of getting sturdy wheelchairs for them was clearly compelling—a dream. We are working on making that dream a reality.

We’re working on fulfilling many dreams, and also on the human ability to imagine possibilties. Is it any wonder that Joseph began as a dreamer? His story starts with his dreams—and we see them became realities in ways (often excruciating) which he could never have predicted.

We are dreamers. I frankly do not know everything we will do in Lodja or elsewhere. I am a worker, not the designer. I understand that my desire to help qualifies me to be among the builders employed by the Master Architect—the God of Abraham, Isaac, Jacob, and Caroline.

We are in the middle of it, or perhaps only one step in. We are a few sentences beyond “Once upon a time” or “I dreamed a dream.” So, when I say “to be continued”, I honestly do not know where this story goes. We have gone through “momentum/disruption” and now we are being stretched into the deflection, where our trajectories change towards something nobler than we had imagined, and our imaginations are as fertile as Lodja itself.

"You hear people referring to the god of Abraham, the god of Isaac, the god of Jacob. I want people to learn about the god of Caroline. God has never abandoned me." Oh, how I love that quote!! Thank you for sharing and lending inspiration to others!!

Wow - what an inspiring article! I will remember it the next time my life is disrupted.