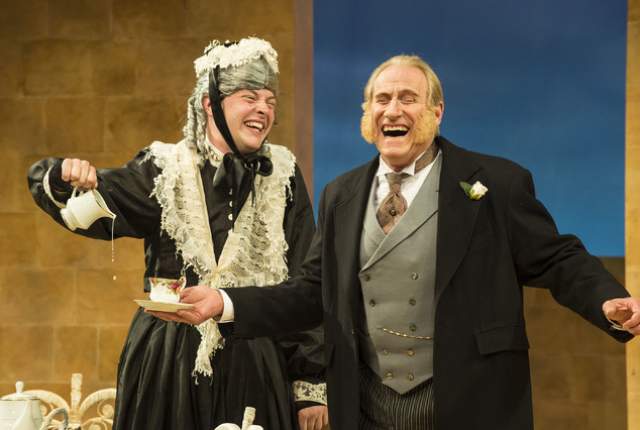 The widely-acclaimed Utah Shakespeare Festival in Cedar City (now in its 53rd year) attracts some of the finest theatre actors and directors in the country. Having just launched their 2015 season, the festival offers a variety of plays, half Shakespeare, half not. I had the opportunity to see four of them this past week; should you be willing to make the trip (and really, you should), I hope that these reviews will be of use in deciding what to see.

Based on the true story of Mozart’s utter ruin at the hands of his jealous rival Antonio Salieri, Amadeus is my least-favorite of the plays I saw. It’s thought-provoking and brilliantly performed, but also dark, depressing, and extremely crass. The vulgarity isn’t gratuitous; it serves a specific purpose in the narrative, but this is definitely one to avoid if you’re particularly sensitive or have youth in tow. Still, there’s much to appreciate here if you enjoy being challenged by theatre. Salieri is the central figure, confessing his crimes to the audience and leading them through his story.

Early on, he tries to bargain with God that he’ll glorify him through music if the Lord will merely give him talent, but it’s clear that Salieri is obsessed with fame. Unable to reconcile Mozart’s genius with his hedonism, and hurt that his righteousness hasn’t yielded musical prowess to match his rival’s, Salieri abandons his morals and his God, setting out to destroy the reputation of his enemy. It’s at times very funny, but often terribly sad. Whether the play is about a a merciless God or a man’s pride destroying him (and those around him) is up for debate.

A crowd-pleasing, laugh-til-you cry favorite, this Mrs. Doubtfire-esque comedy finds two British college boys in the 1890’s convincing their foppish friend to pose as one’s chaperoning aunt (in order to woo their love interests). When the actual aunt, one boy’s father, one girls’ guardian, and the imposter’s own love interest show up, things get complicated (and uproariously funny), as the situation spirals out of control. Written in the 1890’s, this PG-level three-act play is appropriate for older children and up. The ensemble cast (led by the brilliant Michael Doherty) is a very talented group of comedians, even if they over-ham it on occasion. “This is like Studio C,” said an older lady behind me. “Worse,” said her husband. I guess it’s not for everyone, but the majority of the crowd was eating it up. If you enjoy silly, light-hearted comedy, you can’t go wrong here.

Rodgers and Hammerstein’s classic musical about love, war, and interracial prejudice gets as fine a stage treatment as I’ve ever seen here (and I’ve seen several), so this really comes down to whether you enjoy musicals, and this play specifically, or not. Highlighted by several classic songs like “Some Enchanted Evening,” “I’m Gonna Wash That Man Right Outta My Hair,” and “Bali Ha’I,” this production effectively transports audiences to the WWII-era South Pacific Islands. There’s a lush romanticism and solid sense of humor here, as well as impressive production design. Written in the 1949, this play has some mild language (“d*mn” and “h*ll”) along with the implication that a G.I. sleeps with an island girl (they kiss on stage and begin to kneel on the bed, then the lights dim and the scene ends).

THE TAMING OF THE SHREW

One of Shakespeare’s funniest plays, I cannot recommend this one highly enough. If you worry about following along, you needn’t; the direction and performances are such that modern audiences can readily grasp the meaning and the narrative. The entire cast here dazzles in this tale of a bold man who aims to domesticate a strong-tempered woman, whose father insists on marrying off before he frees his younger daughter to do potential suitors. The Bard’s words crackle with wit and wisdom (even if it is a tad misogynist by modern standards), and the actors deliver humorous, heartfelt, and rather smart interpretations. Silly and clever, romantic and humorous, I absolutely loved this one.

For tickets and information regarding the Utah Shakespeare Festival, please visit www.bard.org. Child care is available through the box office. For excellent dining in the area, I recommend The Pastry Pub, Centro Woodfired Pizza, and Sonny Boys Barbeque.