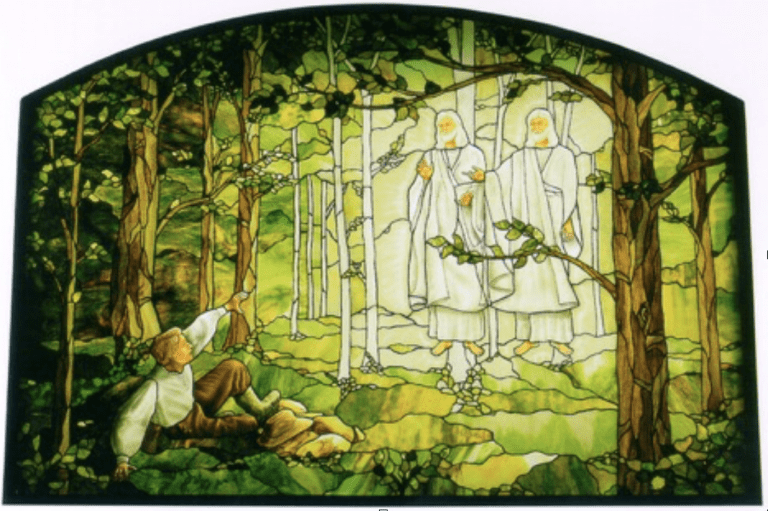 Cover image: Stained glass of the First Vision, in the Palmyra Temple by artist Tom Holdman.

Joseph Smith’s First Vision is one of the most pivotal moments in human history—perhaps the greatest event since the resurrection of the Savior. Most of us are aware that the Prophet Joseph Smith, himself, recorded his First Vision on four different occasions, and that several of his closest friends who heard him speak of his experience in other settings, also wrote down what they heard him say. (More will be written about these unique accounts recorded between 1832 and 1844 in future articles.) Many of us only read the 1838 account found in the Pearl of Great Price. However, concurrently reading all of the eyewitness accounts of the First Vision yields greater views of the Prophet’s groundbreaking gospel experience.

Let me illustrate why reading more than one account could be important. If one were to read a red-letter edition of the New Testament (which highlights all the personal sayings of Jesus Christ in red type), a person could read all the recorded words of the Savior in the Four Gospels in about thirty minutes. Even though the Savior lived thirty-three years, and served a three-and-a-half year mission, the Four Gospels combined cover only 31 days of His entire life! That’s why John the Revelator declared at the end of his Gospel, that his New Testament writings were never intended as biography of the Savior’s life, but rather as a testimony to give us greater faith: “And there are also many other things which Jesus did, the which, if they should be written every one, I suppose that even the world itself could not contain the books that should be written” (John 21:25). “But these are written, that ye might believe that Jesus is the Christ, the Son of God; and that believing ye might have life through his name” (John 20:31). So while none of the four Gospels contain all of the Savior’s teachings, by reading all four accounts, we come to greater understanding of what the Lord taught.

Similarly, the Prophet Joseph never recorded, in a single-setting nor in a single narrative, everything he experienced during his First Vision. Each account tells the same story, and it’s important to understand that he never embellished nor contradicted his testimony from one telling to the next, but Joseph emphasized particular and unique details in each testimony he shared. Reading all the available accounts together adds to the richness of our understanding of his revelation. Here are examples of some of the unique details he and others recorded, as excerpted from just a few of the available accounts. Not all the insights are included, but just a few that were intriguing, which caught my interest.

1835 (Joseph Smith to Robert Matthews, a visitor to Kirtland, Ohio. This is the shortest account of the First Vision.)

1838 (Joseph Smith—History found in the Pearl of Great Price)

1842 (Joseph Smith’s letter to John Wentworth, editor of the Chicago Democrat, first newspaper published in Chicago, Illinois, who was seeking information for a friend, George Barstow, who was preparing a history of New Hampshire)

1840 (Orson Pratt account, written in his book An Interesting Account of Several Remarkable Visions. This is the first known publication of the First Vision.)

1842 (Orson Hyde account in his pamphlet, A Cry From the Wilderness, A Voice from the Dust)

I used to provide college students with copies of all the available accounts of the First Vision, and give them the challenge to read them in one sitting, and then write their impressions. One bright student, Matthew Christensen, took up the challenge to combine all the accounts, using a different colored font for each. He later expanded his initial paper and published his book, The First Vision—A Harmonization of 10 Accounts from the Sacred Grove (Cedar Fort Inc., 2014, 49 pages). I’ll be providing sources where you can read all these accounts for yourself, in a future article.

But if you can’t travel to Salt Lake City to see the presentation on the 240 degree screen, you can watch the 7-minute video yourself online, and experience those “additional perspectives and insights into this remarkable event,” at:  https://www.youtube.com/watch?v=3EgpvCLUq8k

Mike. I've followed the link and read the account on Scott Woodward's website. This is the same one I have already read. It does not say that it was on his way to the grove that he was tempted by the adversary, which was my point. It says "On one occasion, he went to a small grove of trees near his father’s home and knelt down before God in solemn prayer. The adversary then made several strenuous efforts to cool his ardent soul." This indicates that it was after he arrived, which is what the other accounts say. Still waiting for a response from the author about this. Right now, it appears to be an error in the article, unless additional source material becomes available.

Andrews, I found it through a google search of the “1842 Orson Hyde account”.........came up under a Scott Woodward guy...... I’d never heard it either and it was apparently the 1st account published in a foreign language (German)