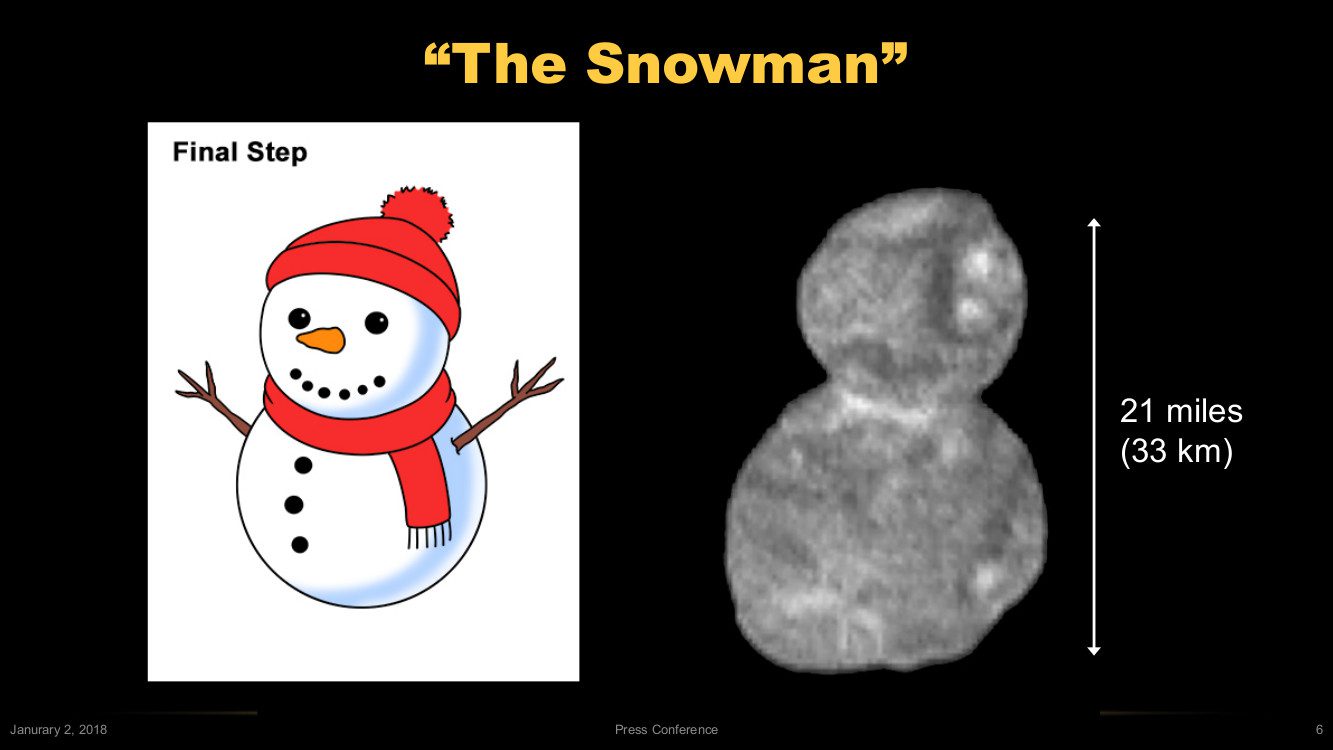 Not only was the discovery and successful flyby of a Kuiper belt object by the NASA space probe a masterful heaven-blessed feat of science and engineering, but the planetoid object’s shape makes it a perfect story character to promote astronomy, space flight and science in general.

“Ultima Thule, the Space Snowman,” might someday even be an animated “Smokey the Bear”-like or Disney’s Professor Ludvig Von Drake-like host of future science and astronomy shows, generating interest and encouraging education in the crucial Science, Technology, Engineering and Mathematics (STEM)  fields.[i]

Click here [ url: https://latterdaysaintmag.com/miracles-among-the-stars-spacecraft-overcomes-obstacles-in-historic-exploration-beyond-pluto/ ] to read about the discovery of “Ultima Thule” by the New Horizons’ Space Probe and the flyby with detailed pictures on January 1, 2019.

After a next to impossible sequence of engineering and astronomical accomplishments that finally made a near flyby, within 2,000 miles, of Ultima Thule (2014-MU69) by the spacecraft New Horizons a reality, the object could have looked like a normal kind of asteroid “space rock”—still fascinating but not very memorable or exciting.[ii]

Caption: Fortunately, Ultima Thule did not end up looking like this non-descript asteroid—the 320 mile diameter Vesta in the asteroid belt between Mars and Jupiter.

Instead, for the first time for a Kuiper belt object beyond Pluto, the amazing 21 mile long object is neither asteroid nor comet, but a contact binary with two spherical objects perfectly “glued” together.

And, as far as the world of imagination goes, it is not clunky, but very cool. It looks like it would be right at home with Beryl Ives singing “Frosty the Snowman.”[iii]

Let’s look at what is already happening with pastries, breads, T-shirts and even knitting, all promoting the shape and personality of “Ultima Thule,” roughly translated as the “last frontier” or “beyond the furthest possible frontier.”[iv]

And, now much fancier Ultima Thule gear, now online since I first searched the web in January, 2019 a couple of weeks after the flyby:[v]

Here is a picture of “Professor Ludvig Von Drake” and another when the animated character was introduced by Walt \Disney himself on “on September 24, 1961 as part of the first-ever NBC episode in color of “Walt Disney’s Wonderful World of Color.”[vi]

It looks like there are some good descriptions and imaginative ideas about UT going on in youtube video space. I am searching for youtube videos like “ultima thule space snowman new horizons NASA” or some such text every few days and I may mention some of what I find in future articles.[vii]

I don’t yet see on the internet any specific decorating ideas for an Ultima Thule-themed birthday cake, which would be great. There is a general “Rocket Ship/Outer Space Party” page, but nothing that might be more specific to the Ultima Thule discovery.[viii]

There are so many creative ways to look at this including cardboard models of the New Horizons space probe to small and larger scale versions of the Atlas V rocket that put the probe into space and even a dramatization or animation of the “contact binary” itself including how the two balls become joined into a single object.[ix]

President M, Russell Ballard has often declared how the millions of stars that can be visible on a cold dark winter’s night direct his attention to the Lord’s words to Moses: “And worlds without number have I created; and I also created them for mine own purpose; and by the Son I created them, which is mine Only Begotten” (Moses 1:33).

“In our day the Hubble deep-space telescope has confirmed the magnitude of what Moses saw. Hubble scientists say the Milky Way galaxy, of which our earth and sun are just a tiny part, is estimated to be only one of over 200 billion similar galaxies.”[x]

Similarly, the discovery and flyby of the “Ultima Thule” contact binary and all of the amazing knowledge and understanding that mere humans have been given in our day for such a task adds to that testimony of the Creator declared by Moses.[xi]

Caption: The Hubble Ultra-Deep Field image of a mostly “empty” part of the sky that with a long exposure revealed it to be full of distant galaxies. This photograph is “roughly one twenty-six-millionth of the total area of the sky.”

“Alan Stern said: “Everything that we’re going to learn about Ultima … is going to teach us about the original formation conditions in the Solar System that all the other objects we’ve gone out and orbited, flown by and landed on can’t tell us because they’re either large and evolve, or they are warm. Ultima is unique.”

“The new shape information indicates that gravity – which contracts more massive bodies into spheres – played perhaps less of a role in contouring the lobes of Ultima Thule than previously thought.

““They’re just rocks floating out in space. So what?” says UCLA astrophysicist David Jewitt. That’s how he used to feel about asteroids. The common wisdom holds that asteroids live placid lives before meeting a predictable, standard death: A pair collide, quickly obliterating each other. But recently, scientists have spotted asteroids behaving and dying in unexpected ways: Some have tails, some break apart into chunks and others disintegrate into smears of dust, with no obvious second asteroid in sight. What the heck?”

The Atlas V rocket that put New Horizons into space.

That’s BURL Ives. I grew up on his music, like Little White Duck.”