Turning a Wall into a Window | Meridian Magazine 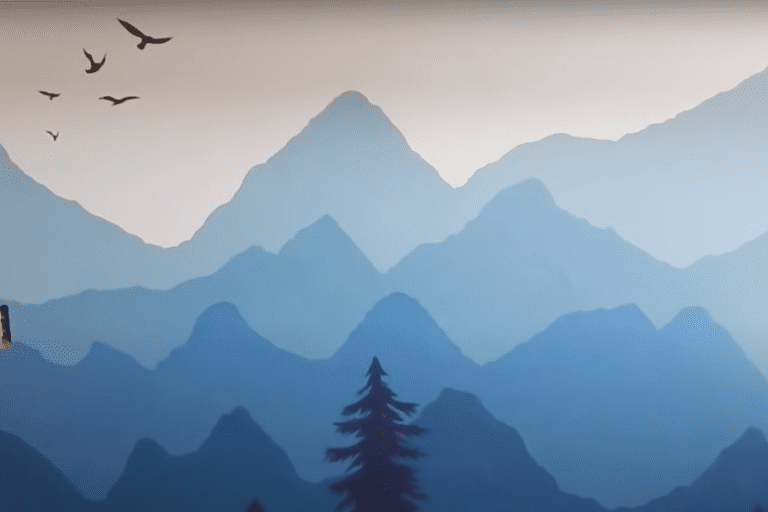 Turning a Wall into a Window

A wail of distress broke the nighttime silence of our little home and I forced one heavy eye open to check the time on my phone. 2am. It was the middle of the night going into my 31st birthday, but as I glanced across the bed to my husband who had to get up for work at 5, I knew I would have to be the one to answer the call of our insistent, nocturnal two-year-old. It turned out that his middle-of-the-night emergency was that a favorite toy had dropped off the side of his crib, out of reach, and he was inconsolable. I held his sobbing little body close and rocked him back and forth in the golden glow of his nightlight, thinking how desperately I wanted to be sleeping and how this wasn’t my idea of a great start to a birthday. But I looked at the blank wall above his crib and started to think again on the scene I planned to paint there and I began to calm, even as he did.

Becoming a mother was a difficult transition of identity for me. Before I had a child, I was going to graduate school across an ocean and using it as a launchpad to travel the world. I was living part time in New York City pursuing acting opportunities, and part time in England studying creative writing. I was once stopped in the Gatwick airport for a survey that had the question, “how many flights have you taken this year?” and my answer was 25. I had built my entire life around creativity, exploration, and freedom. I married a man who was just as committed to that dream; we celebrated our 2nd wedding anniversary at the top of Mount Kilimanjaro. But when we decided to have a child, things couldn’t help but change.

My swelling belly cleared our travel schedule (and my acting schedule) for a while and the life we wanted for our little one meant we would have to knuckle down and work a little smarter and harder at building a financial foundation to raise him on (no more choosing between using our last $10 for street tacos or a taxi ride). My life began to become more and more conventional and my creative outlets began to be fewer and fewer. I knew in my heart this change wouldn’t be forever. It was a stage of life; just a season. But by all accounts, it was going to be a difficult one.

But even as I mourned the temporary loss of the old, beloved things, my awareness began to grow that this somebody inside me was going to be quite the new, beloved thing. I wanted to know him, this little boy making himself at home in my belly. I could feel his kicks, his flutters, and occasional hiccups, but the days seemed to pass so slowly. I wanted to see him, to know something of the boy he would be. I was impatient to meet this person that already had my heart and was going to have my life. The only way I could think to get close to him before he came was to create the environment he would come into. I could make him a nursery and then at least I’d know a little of the world that he would first look out on, even if I couldn’t know what he would think of it.

I wanted the nursery to be warm and friendly and magical and transporting and I was itching for something creative to do. The best solution I could think of for all of that was to paint a mural. Had I ever painted a mural before? No. I always wanted to learn to paint and was even gifted a beautiful paint set and a booklet of paper in my teenage years, but the first time I sat down to try it out, I didn’t know what to paint. I didn’t trust that what I came up with, without expertise of any kind, would look any good. I didn’t want to waste the paper unless I had something worthy to fill it with. That first session, I sat and played with some sunset shades to create an evening scene and tried to paint a sphere. The finished image wasn’t really anything. I never opened the booklet of blank canvas again.

So, why would painting directly on the wall be any better? At first glance, a mural seems to be a much more permanent, committal thing to paint than a picture on canvas, but I’d done so many paint jobs on houses; changed colors so many times. If you accidentally got some of the wall color on the trim or vice versa, you could just wipe it off or paint over it. In fact, the only sure and permanent thing about a wall color is the fact it will probably change someday.

At least that’s what I told myself.

It didn’t stop a panic from rising inside me as I brought a pencil to the wall to sketch the initial shapes of an ombré mountain range I hoped to put there. I felt the nervousness of an obedient child trying her hand at something she knows is wrong; drawing on the walls as soon as no one was looking. But I also felt certain that I wanted this baby inside me to have a brave mama. So, I began to draw. And when I finished drawing, I began to paint. And I painted all day. There was something utterly satisfying about the way a simple curve of a line could suddenly look like the slope of a mountain; how a few strokes here and there began to make the wall look like a window into a world of high adventure.

The selection of paint colors I had were from the “oops” section of Home Depot, so I had to mix a few to make the shades I needed. But even that was satisfying. To watch a dark color hypnotically swirl into a lighter one until the shade I needed grew clearer and clearer made me feel somehow powerful; as though I was infused with the very magic I was trying to create for my child. I started from the mountain range furthest back and fell further and further into the world I was shaping as I added each subsequent layer of peaks. By the time I got to the trees in the front, I felt transported. Maybe I didn’t have to get on a plane to travel somewhere. Maybe I didn’t have to leave my house to go exploring.

The finished mural made the room feel just how I wanted it to; like you were walking into a place that sparked the imagination and encouraged your most adventurous impulses. And wouldn’t you know, when my boy was finally born, he was quick to become an adventurer. He traveled with us to Costa Rica at 9 months old and was patient and calm through 6am bird watching walks through the jungle and 10pm sea turtle hatching tours. In fact, our Tico guide was so impressed with him that he named one of the baby sea turtles, that we carefully ushered out to sea, after him. When my husband finished building his canoe, our baby boy was quick to want to be in it and “canoe” was one of his first (and still one of his most frequent) words.

When my son was only 19 months old, we moved. We left the mural behind and he got a new room.

Musing over and planning and painting that first mural had been the salve for my aching desire to know something about my unborn son (and really about myself as a mother as well). Now, I needed the balm of musing again. Staring at the blank wall of this new room—as I sat up nights or wrestled a toddler who didn’t want his diaper changed or picked up the same clothes and toys for the hundredth time and wondered if this would be my contribution to the world—reminded me that there was a bigger picture to consider. (In this case, literally. What is a mural, if not an enormous picture?)

That blank wall was a world of possibilities that represented not only how I could decorate this room, but what kind of childhood I could give my son. Thinking of the things I could put there reminded me of the parts of my own childhood that ignited and excited me most. It reminded me that my life has been filled with wonder and his life can be too and I will be the one that makes it that way. Planning the colors and the configuration and the shapes and the mood of the painting made me feel like a creative. It made me feel like the frumpy appearance I wear most days right now is merely disguising an artist whose pilot light for imagination can never be extinguished by bathrobes, messy buns, or stretch marks.

In the end, I painted a winter woodland scene with a single glowing lamppost in the middle, ushering anyone who visits there into the land of Narnia. Only it wasn’t just anyone that would visit, because halfway through painting the mural, I realized that the scene wouldn’t mean as much without someone in it. Two someones actually; the boy who made me a mother, and the curve in my belly under my paint shirt that would make him a brother.

My babies won’t be babies forever. Someday they will grow up and not need so much from me. Someday my husband and I will be able to ride bikes across Scotland again or buy fresh fish dinners from the night market in Zanzibar after a day of learning to scuba dive. And I will be back on stage someday, soaking in those transcendent moments when you suddenly understand the character you are playing with utter clarity and the audience holds their collective breath and you are united in empathy and awe and the world falls away and there is nothing but this moment. But maybe even then, when I have what I always wanted, I’ll feel a pang of poignancy in my heart at the loss of those bleary-eyed nights when the one who needed my empathy was my little two-year-old crying because his toy dropped out of the crib.

Turning a few cans of paint into a moment of fantasy, reminds me every day that a wardrobe isn’t just a place to hide the clutter when I’m panic cleaning before a visitor arrives, but a doorway into a world of heroism and wonder. Painting a scene that turns a bedroom into a storybook reminds me that there are endless numbers of stories worth reading and worth living. Painting a wall with more than just a panel of solid color reminds me that eccentric creativity and domestic consistency don’t have to live at odds with one another and that somewhere in the seemingly constant dissonance between the two in my soul, I can find joy.

Mariah has recently begun painting murals for other people as well. If you’ve got a mural idea you’d like to discuss, email Mariah at [email protected].