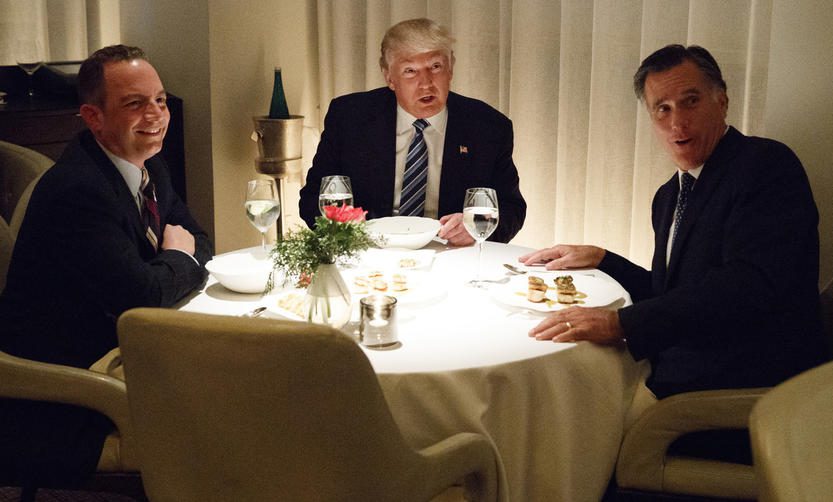 Trump, Romney have Second Meeting over Dinner about Secretary of State Post

A second meeting over dinner Tuesday night between President-elect Donald Trump and Mitt Romney suggests one of Trump’s toughest critics during the campaign is still in the running to become secretary of state.

“It sends a signal that Romney is a serious candidate, that this was about more than a courtesy interview,” said Chris Karpowitz, co-director of BYU’s Center for the Study of Elections and Democracy.

Choosing Romney, who slammed the billionaire businessman as a “fraud” and a “phony” in a speech last March at the University of Utah, would leave Trump’s supporters feeling “betrayed,” Trump senior adviser Kellyanne Conway said Sunday.

Others who supported Trump, such as former House Speaker Newt Gingrich and former Arkansas Gov. Mike Huckabee, have also pushed back against Romney, the GOP’s 2012 presidential nominee considered an adopted Utah favorite son.

Trump is looking at other candidates for the job once held by his Democratic rival in the presidential race, Hillary Clinton, including former New York Mayor Rudy Giuliani, retired Gen. David Petraeus and Tennessee Sen. Bob Corker.

But after what Romney termed “a far-reaching conversation” about U.S. interests around the world with Trump during their well-publicized meeting earlier this month, the second meeting was set despite the split among Trump loyalists.

“There’s obviously a great deal of controversy within the Trump team about appointing Romney that’s spilled out into the open in ways that are highly unusual,” Karpowitz said. “The whole process has been more public than we typically see.”