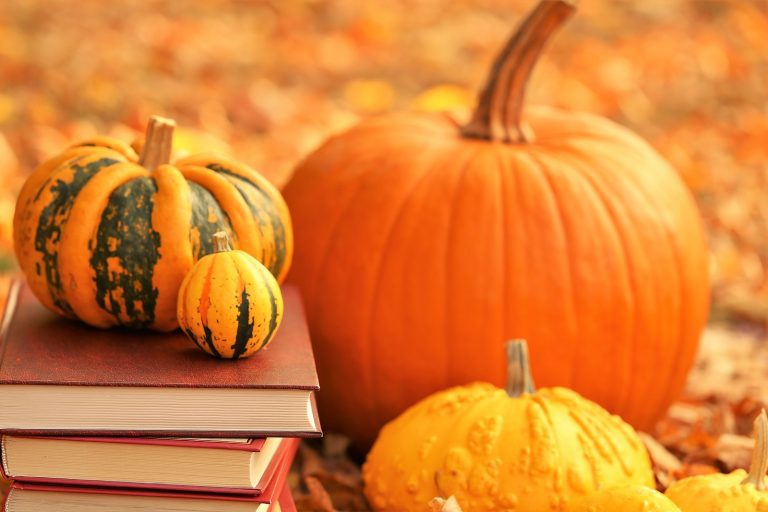 Halloween will soon be here and that equates to dressing up in costumes, candy and great imaginative books that can take you away to places rich in magic – and beyond.  All of these books are best suited for ages nine and up, unless otherwise indicated.

The Haunted Lake, by P. J. Lynch, is an eerie, atmospheric tale told through an overly large picture book with breathtaking, full-page illustrations that grip you and don’t let go.  The story does the same and I found myself pondering the events long after I’d read this story.  Jacob and his father are the only ones who fish in the lake many believe is haunted.  This lake was formed years before when the river was dammed, and the town became flooded.  Most of the townspeople left, but Jacob and his father didn’t leave because the cemetery was where Jacob’s mother was buried.  But some strange happenings occur with Jacob and a young woman he falls in love with.  The gorgeous pictures were painted with watercolor and gouache.

Ghostology: A True Revelation of Spirits, Ghouls and Hauntings, by Lucinda Curtle,  Douglas A. Steer, and ingeniously illustrated by Garry Walton, is an oversized book filled with flaps that reveal secret locations and information, diagrams, maps and assimilations of exorbitant haunts and revealing fakes and frauds. There’s even a field kit of recommended items needed to collect ghosts.  The compelling advantage of this book is how creative and imaginative it is.  This opens up ingenuity and invention and stimulates the mind of the reader.

The Witches: The Graphic Novel, by Ronald Dahl, and illustrated with great detail and imagination byPenelope Bagieu, stays true to the original storyline but is filled with images of the events that take place making this a delightful book.  I normally don’t recommend graphic novels as I believe they take away the child’s imagination by replacing words with pictures.  But this book is an exception to the rule because it’s so well done. For kids, eight and up, who haven’t seen the movie, read this book first.

Embassy of the Dead, by Will Mabbitt, is the first book in a planned series and once you read this adventure, you’ll be glad you did!  When Jake makes the mistake of opening a mysterious box, everything changes for him.  What he finds inside that box – you will have to discover for yourself.  But now Jake is running for his life and finds himself in a completely different world.  Luckily, he discovers he has a knack for talking to ghosts because that is what he finds himself surrounded with – along with a dead undertaker. This exciting adventure will take even the most reluctant reader to new levels of enjoyment!  There are wonderful etchings, made with gouache, pencil, watercolor and crayon by Taryn Knight that are sprinkled throughout this perilous story.  This book is geared for eight through twelve years of age.

The Monster Hypothesis, by Romily Bernard, is an adventure where investigating and solving problems are at the forefront.  Kick just moved in with her grandmother, a fake psychic, while her parents are working on scientific research.  Kick finds herself in deep trouble when she decides to play her grandmother’s part and be a fake psychic to help solve the town curse.  But she doesn’t know how to take off the curse which happens every hundred years – that of children turning into monsters.  What will she do when kids start missing and something unforeseen begins to happen?  Beware – this is a page-turner!

The Monster Who Wasn’t, by T. C. Shelley, is about a young imp who comes from deep in the underground where monsters live.  But he doesn’t look or act like a monster as he looks more human.  So, as he sets out into the world, with the help of some grumpy but helpful gargoyles, he is about to discover who he truly is and where he belongs.  This book would be a terrific read aloud!  This book is best suited for eight through twelve years of age.

Gloom Town, by Ronald L. Smith, is about a twelve-year-old, Rory, who sets out to an old mansion hoping to get hired to help around the premises.  He and his mother really need the money, so he goes there with great anticipation.  However, what he discovers is that the owner is strange and seemingly with a bad disposition.  Later he discovers that the owner isn’t even human and is out to capture people’s shadows. Rory and his friend, Isabel, are about to become embroiled in an adventure to overcome this evil owner. This story is full of intrigue and mystery.

The Mutant Mushroom Takeover (A Maggie and Nate Mystery), by Summer Rachel Short,has Maggie and her friend Nate in search for a particular rare fungus in order to win a big naturalist award.  But instead, they discover a rare bioluminescent fungus that seems to be doing strange things to the community.  When her older brother, Ezra, develops a bluish glow and develops a cough he can’t stop, Maggie realizes she must solve this mystery.  The story is full of action and there is even more information about the scientific concepts explored in the story found at the back of the book in the Author’s Notes.

The Mystwuck School of Musicraft, by Jessica Khoury, is about Amelia desiring to go to this fantasy boarding school where students learn to use their music to make magic.  When Amelia does poorly at her audition to get into the school, the administrators give her a trial period.  But when a giant storm starts to brew, she is left to use her magical musical talents to help save the school.  This is a nice and unique blend of music with magic.