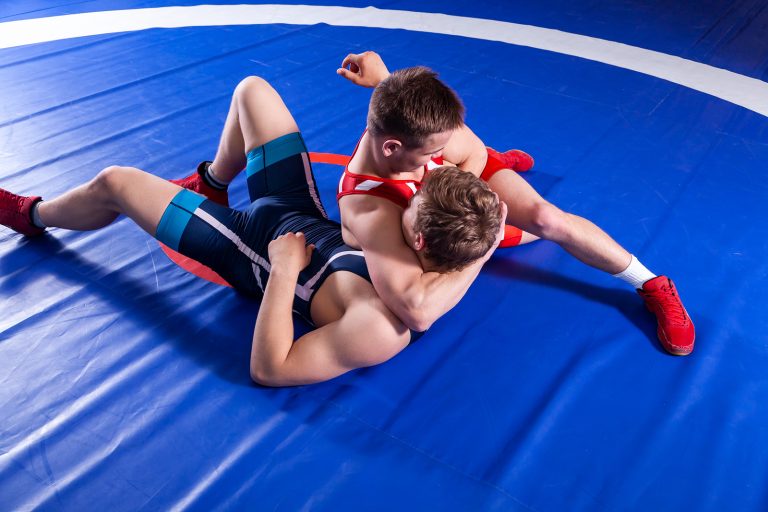 When February rolls around, that month when wrestling and basketball are coming to a close, I often find my mind slipping back to my athletic days in high school. I recently found myself reminiscing about the first high school wrestling tournament I ever participated in. It was a Junior Varsity tournament. Our small school had a J.V. wrestler for every weight except heavyweight. Thus, with eleven wrestlers, one water boy, and our coach, we headed to a nearby town for an all-day tournament.

We called our water boy Curly, or Sheep, because of his tightly curled hair, and he definitely was not a wrestler. But he had the two qualities needed in a good water boy: he could carry water, and he could tell stories better than anyone. When we would come back from our wrestling meets, he would twist the most mundane match, where we were facing a very inferior opponent, into a tale where it sounded as if we were going up against an agitated Godzilla and coming out conquerors.

His persona was that of a giant marshmallow. His physique was the same. When Coach approached us from the meeting where they determined the ordering of the wrestlers in the tournament, he was excited. “Curly,” he said, “no other team has a heavyweight, so I am putting you in, and you can win team points for us by default.”

“But, Coach,” Curly protested, “I don’t have a wrestling uniform.”

“No problem,” Coach said. He turned to me. “Howard, you’re the next biggest wrestler. You will have to hurry to the locker room and switch your uniform to Curly.”

“But, Coach,” Curly complained, “it will be all sweaty.”

“Besides,” I added, “my wrestling uniform is half the size of Curly.”

“What a bunch of whiners,” Coach retorted. “I could open a distillery as much as you guys whine. A little sweat won’t hurt you, Curly. And Howard, you find a way to stuff him into that suit if it kills you.”

There was no arguing with Coach, so after my first match, I ran for the locker room. Coach had already sent Curly there, and he was undressed and waiting. I flew out of my uniform, and we started pulling it up around him. It took Frank, Lenny, and me, along with Curly, to stuff him into it. We were tugging the uniform and poking parts of him in, like trying to stuff a king-size pillow into a couch-cushion pillowcase. We finally got most of him in the uniform, but he was still sticking out all over. The uniform looked like someone had painted it on, and it wasn’t a very good paint job.

As I scurried into my other clothes, Curly started to complain. “I can’t move in this thing. If I do, I’m sure I’ll tear something.”

“I’m not walking out there like a stupid ballerina,” Curly argued.

Just then, the second call for Curly came on the intercom. A third call, and he would be disqualified. Suddenly, Coach appeared and bellowed like a bull, and Curly minced his way out of the locker room with us behind him. As Curly walked gingerly onto the mat to have his hand raised for the default win, the crowd roared with laughter.

The next two rounds went similarly. After each round, I could feel my uniform getting looser. In the late evening, when the two lines were formed for the final championship match opponents to shake hands, something interesting happened. A huge heavyweight wrestler, somewhere close to the size of a Mack truck and looking like a Neanderthal, lined up across from Curly. He was from the host team, and as such, had not had to appear for his default hand-raising.

Curly became frightened. He turned to Coach and pointed at the other wrestler. “I’m not going to wrestle him!”

Whether Coach knew all along there was another heavyweight wrestler, we will never know, but he was absolutely defiant. “You wrestle him and die like a man, or I’ll take care of you myself!”