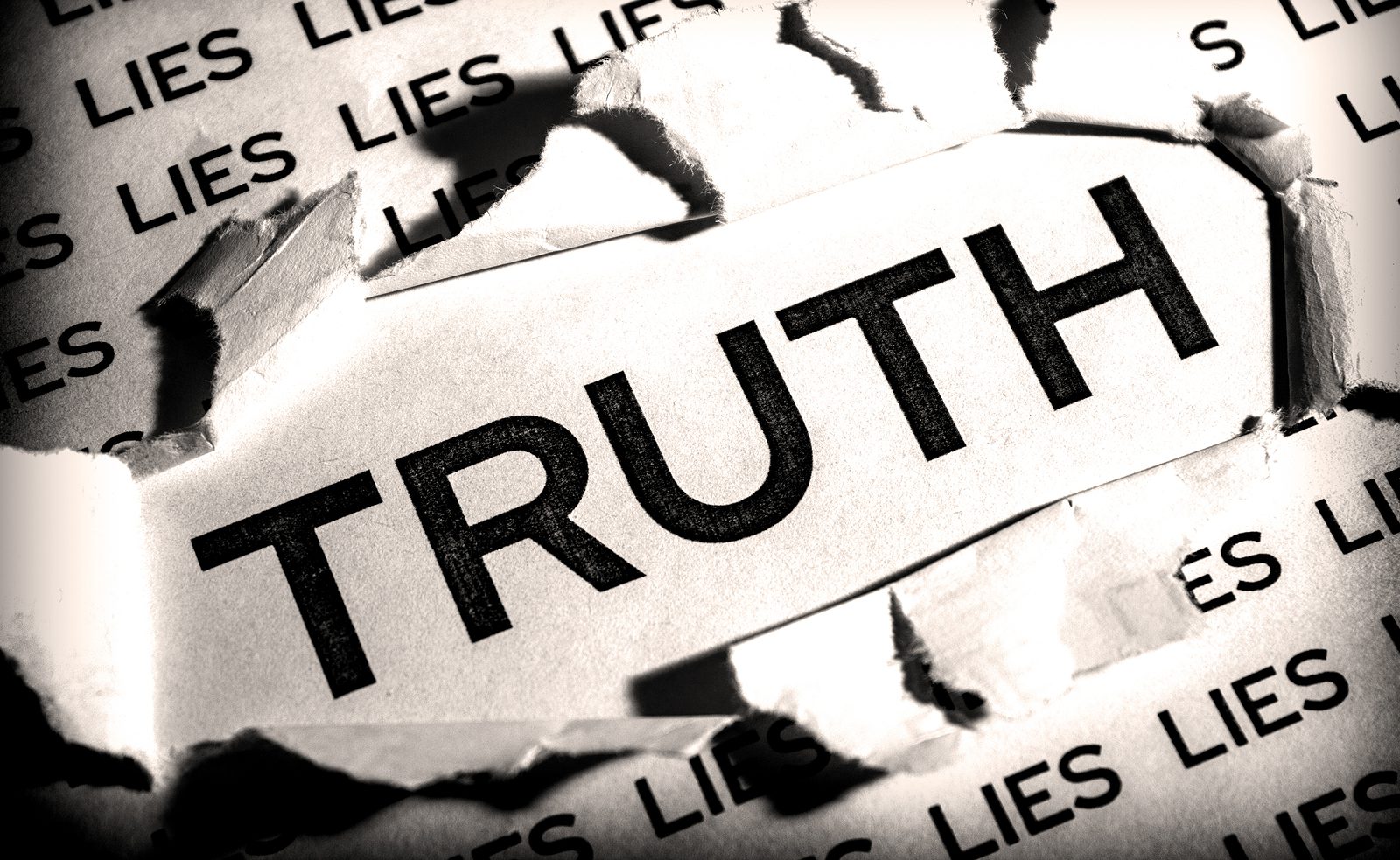 Editor’s Note: This wonderful insight from Wally Goddard seemed particularly relevant in this confusing time when so many voices are competing for our attention and belief.

How can we know what is true? That is one of the puzzling questions of existence. It matters a great deal where we place our trust for truth. In fact, our success in discovering truth depends upon the trustworthiness of our process for discovery.

Empiricism argues that we learn through observing. We look at our own experience or the experiences of others to learn what works and what doesn’t. Sometimes empiricism is paired with reason but, in its purest form, empiricism recognizes no authority but scientific method. The scientific method gives us valuable insight regarding what works in the world. However, because that approach takes such a narrow focus for discovering truth, empiricism eliminates the whole world of faith which allows for those things that cannot be seen.

Reason is another way of knowing. Those who value reason determine truth by thinking logically. They apply study, reflection, and logic to a question to arrive at an answer that seems sensible and valid. Reason leads us to many wise conclusions. But we need to keep in mind that our logic may at times be flawed, biased, or misinformed. A classic example is Aristotle. We revere him as a great philosopher, but he also reached some faulty conclusions. For example, Aristotle believed that heavy objects would fall faster than lighter ones in proportion to their weight. The idea makes sense. But simple experiments could have—and ultimately did—correct his error. All objects fall at the same rate (if air resistance is not a factor). Combining reason with empiricism may provide some checks and balances that prevent our reasoning from going off course.

Intuition teaches that “truth is known by a flash of insight or immediate awareness. Commonly intuition is regarded as jumping ahead of reason and discerning understandings at which reason later arrives by its own slower means” (Butler, 1968, p. 24). We have all experienced intuition—something “clicks” into place for us causing us to trust our own sense of what is true. However, our personal intuition may not hold much weight for other people. And sometimes we may desire to confirm our intuitions with other ways of knowing.

Authority is another way of knowing. We place our trust in a person, organization or source that we believe is credible. For example, many Christians believe that all important religious questions can be settled by the counsel and authority of the Bible. Faithful Catholics look to the Church as the arbiter of truth. Both groups rely on authority. Even those churches with communal orientations depend on the consensus of the group as the governing authority. Of course, we need to use good judgment in determining the level of confidence we can place in an authority. We can all think of times when people in positions of authority have proved to be fallible.

The fifth way of knowing is revelation—the process of God communicating to His people through prophets and personal inspiration. Christians typically believe in the concept of revelation, but many isolate it to the historical past.

The epistemology that people trust will be influenced by their experience and philosophy. Protestants generally rely heavily on the authority of the Bible. In some Protestant traditions, the proper interpretation is decided by the community of believers. Roman Catholics generally accept the authority of the Bible, Church tradition, and the reigning Pope. Yet most Catholics would be uncomfortable with the idea of continuing revelation.

Each epistemology can be an important component in a search for truth. But as we have seen, there may be limitations to each one without the balances and insights provided by the others. Ideally, we should not limit ourselves to only one epistemology in discovering what is true.

What Epistemologies Do Latter-day Saints Honor?

Do we believe in empiricism? Yes! In fact, we believe that life is a progression of experiments on truth. Jesus Himself pronounced: “If any man will do his will, he shall know of the doctrine, whether it be of God, or whether I speak of myself” (John 7:17). We believe that it is not possible to know truth apart from living it. Alma described our growth in truth as based on experiments: “Yea, even that ye would have so much faith as even to plant the word in your hearts, that ye may try the experiment of its goodness” (Alma 34:4).

What about reason? Does it have an honored place in Latter-day Saint epistemology? The Lord invites us to come to Him and reason together with Him (Isaiah 1:18). He re-extends the invitation in modern times: “And now come, saith the Lord, by the Spirit, unto the elders of his church, and let us reason together, that ye may understand; Let us reason even as a man reasoneth one with another face to face” (D&C 50:10-11).

Reason is so woven into our faith that we call it “a rational theology” (See the respected Latter-day Saint book of that title by John A. Widtsoe.). In many faiths, higher levels of education are associated with lower levels of religious faithfulness. Among the Latter-day Saints, that is not true. Increased education does not diminish the faithfulness of saints; in fact, it seems to increase it presumably because our faith is fully compatible with reason.

Intuition is the next way of knowing. How does it fit in Latter-day Saint belief and practice? That depends on how we understand intuition. To the Latter-day Saints, intuition is not some chance firing of brain circuits; it is the whispering of the Holy Ghost.

The Lord declared: “Yea, behold, I will tell you in your mind and in your heart, by the Holy Ghost, which shall come upon you and which shall dwell in your heart” (D&C 8:2). Oliver Cowdery was chided by the Lord for failing to honor the subtle message He sent him: “Did I not speak peace to your mind concerning the matter? What greater witness can you have than from God?” (D&C 6:23). Insights that illuminate our minds and testify of truth are considered full-fledged messages from God among Latter-day Saints. What the world of philosophy calls intuition we call inspiration.

The Latter-Day Saints believe in authority but are distinct in their choice of authority. Unlike conservative Protestants, we don’t see the Bible as the primary or sole authority in our religious lives. Instead, we honor it as one of many specific ways God directs His children. We may be similar to Catholics in that we place high levels of trust in our central leaders as our primary authority in matters of doctrine. But for us, those leaders follow the pattern of ancient prophets which is one of the distinctive claims of the Restoration.

We believe in revelation—but not merely in the historical sense. We believe that the same processes God favored in ancient times are those He still uses. He speaks to living prophets. “We believe all that God has revealed, all that He does now reveal, and we believe that He will yet reveal many great and important things pertaining to the Kingdom of God” (Article of Faith 9). Once again, the Latter-day Saints enthusiastically embrace this way of knowing.

Many Ways to Learn Truth

So Latter-day Saints are an epistemological stew; we believe that all ways of knowing are important. In fact they provide balance to each other.

In the restored Church, there should never be a mindset that all the thinking and deciding has been done and we need only to digest the truth delivered to us. Our prophets regularly challenge us to develop our own testimonies using all the methods of discovering truth.

We are invited to live the principles of the gospel and observe the blessings they produce (empiricism). Every Saint is encouraged to study and ponder the scriptures and doctrines to gain confirmation of their validity (reason). We have the gift of the Holy Ghost so that each member is entitled to personal insight and inner knowledge (intuition). We are given the opportunity to raise our hands to sustain the brethren and then look to them for godly counsel (authority). And we are startlingly unique in our belief in a living prophet and continuing revelation—both prophetic and personal.

I don’t know of any culture that honors and values all the ways of knowing truth as completely as the Latter-day Saints.

Anchoring the Tower of Truth

Years ago, Nancy and I were driving home from the Memphis Temple. As we drove along the flat terrain of the Mississippi delta, I noticed a tall radio tower that stood out in the miles of flat, plowed fields. I noticed the tower was anchored by guy wires in several directions and at several levels. I thought about how that giant tower of metal was secure because of those multiple anchors. If the southern anchor failed, the tower could fall to the north. But, with all anchors in place, the tower could stand against the forces of nature. I found it fascinating at the time. Now I consider it an apt metaphor for securing truth.

Because God delivers truth in many ways, the tower of the Restoration is well anchored. It stands straight and true through storms and controversy.

This is just as the Prophet Joseph Smith taught: “No unhallowed hand can stop the work from progressing; persecutions may rage, mobs may combine, armies may assemble, calumny may defame, but the truth of God will go forth boldly, nobly, and independent, till it has penetrated every continent, visited every clime, swept every country, and sounded in every ear, till the purposes of God shall be accomplished, and the Great Jehovah shall say the work is done” (Teachings of Presidents of the Church: Joseph Smith (2007), 444).

The Restoration is a tall and sure tower on the religious landscape. It is secured and affirmed by every epistemology.

We are not limited to only one way of finding God’s truth. We can successfully establish His truth by using all of the methods He has given us.

Thanks to Barbara Keil and Annie Foster for their insightful and patient work in refining this article.

When I began reading this article, I thought the LDS approach to truth would be simply Revelation--with a sprinkling of authority. Thank you for showing how all methods of acquiring knowledge are put to use. Using our empiricism and reason as well helps us grow and learn for ourselves. I would have thought intuition the least important or reliable source of knowledge--but of course! When supported by the other four, it's the most personal and therefore perhaps the most long lasting and relevant to us personally. Thank you for this new knowledge!