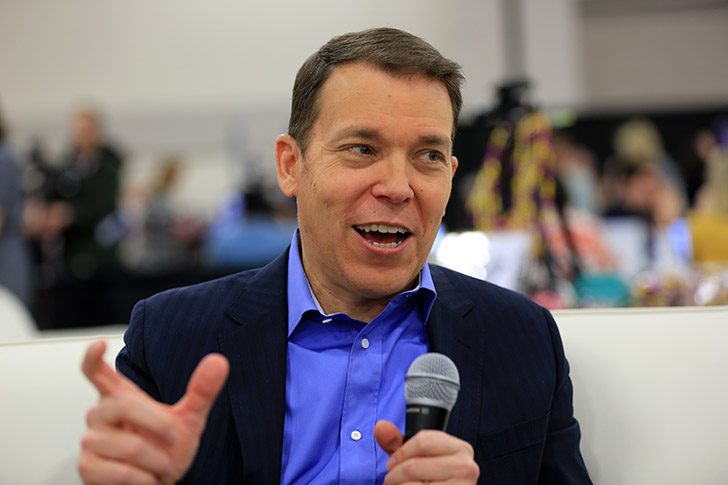 The Surprising Secret that Holds a Family Together

Bruce Feiler was a keynote speaker at the RootsTech Convention on Thursday, Feb. 4, 2016.

In 2013 Bruce Feiler, New York Times columnist and six-times best-selling author, wrote an article that may have surprised even him. Called “The Stories that Bind Us”, it was an answer to these questions: “What is the secret sauce that holds a family together? What are the ingredients that make some families effective, resilient, happy?”

What he said resonated so deeply with people that not only did his article become the most emailed article for the entire month for The New York Times, it became the number two most saved article on the entire planet for the entire year (out of 850 million articles). Talk about hitting a nerve.

So what was so breathtaking about this article? And what was the answer to his questions about what the happiest families do?

Here it is: “The single most important thing you can do for your family may be the simplest of all: develop a strong family narrative.”

He learned about this by talking to Dr. Marshall Duke, a colorful psychologist from Emory University and his wife Sara, who worked with children with disabilities. She had noticed something about her students.

“The ones who know a lot about their families tend to do better when they face challenges,” she said.

Feiler wrote, “Her husband was intrigued, and along with a colleague, Robyn Fivush, set out to test her hypothesis. They developed a measure called the ‘Do You Know?’ scale that asked children to answer 20 questions.

The results led to an overwhelming conclusion. “The more children knew about their family’s history, the stronger their sense of control over their lives, the higher their self-esteem and the more successfully they believed their families functioned. The ‘Do You Know?’ scale turned out to be the best single predictor of children’s emotional health and happiness.”

How Feiler Came to Tell Stories

Growing up as a Jew in Savannah, Georgia, Feiler came by this interest in story telling naturally with two story telling traditions in his family. When as a young man, he moved for a period of time to Japan, he wrote his stories home. He found, for instance, that as an honored guest in a home staying in Japan he received liver pie for dinner. He struggled to get through it, only to find that breakfast in the household was the cold leftovers from the night before. The only thing worse than liver pie was cold liver pie.

He wrote these stories home and when he returned was surprised to find that everyone in his neighborhood seemed to greet him, saying, “I liked your stories.” His grandmother had copied his letters and passed them widely around for all to see.

He began to see the importance, the sheer magic of a story, and so he turned his attention to some of the oldest stories of humanity—the stories of the Bible. Of the millions of stories that humanity told from the most ancient times, why did these few remain? What about them captured the passion, the pathos and imagination of humanity? He wanted to know.

He journeyed deep into the southern Sinai to a monastery built by what was supposed to be Moses’ original burning bush. He said, “It was a raspberry bramble and was supposed to be in the same place since Moses was there. Then they actually moved it so they could expand the monastery. Can you imagine the discussion in that committee meeting? Should we move the burning bush?”

He laughed because in the monastery there was an unsightly fire extinguisher and wondered if you would ever consider using that on the burning bush.

To tell his stories, he climbed Mt. Ararat where the Ark supposedly landed. He followed Abraham’s journey into Iraq. He began to see that “the greatest breakthroughs are made not when you are comfortable, but when the people were in the wilderness in the worst of times.”

All might have been well and he could have continued a career that involved walking these ancient roads until he received the bad news from a doctor that he had a tumor in his leg. The ugly word cancer had come to shake his life. Now, he had to turn his attention closer to home. If he were to die, what stories would he want to be left for his children? How would he be able to record who he was and who he had been for the children he would leave?

He took his curiosity, passion, energy and enthusiasm for story telling and applied it to his own family. That’s how he came to write the famous article and a book The Secrets of Happy Families. When he asked what successful families do right and what can I do—the answer was surprising. Spend time together talking in a very specific way. Tell your stories.

All of these stories may not be easy. Some stories in our families are ascending—the story of how we came to triumph over something, how we came to achieve. Some are descending—how we lost everything but found the power to endure anyway. Others are oscillating—they are both up and down. All three kinds of stories enrich a child’s life and teach them about his or her place in the world.

Why stories are so powerful, he says, is that they become an agent to define the family. They become a way to convey a community’s values. You use a story to say, “This is what we believe in.”

Telling a child their family story gives them a greater sense of control in the world. You create ritual and understanding. You create connection.

Feiler suggested three ways to enhance our family’s that center on story telling.

Write a Family Mission Statement: You can write a family mission statement. He talked to Jim Collins, author of Good to Great, who told him that high functioning groups of any kind have mission statements. They stimulate progress, and yet as the group changes and adapts, it preserves the core.

Feiler said, “I thought that was a little cold, a little corporate, maybe even a little corny. Then someone asked me a question. They said, ‘You are all committed to family history. You talk about this a lot. What values are most important to all of you? Could the people in your family tell me?” He knew they would have to articulate it.

He said they got matching pajamas, gathered everybody together and made old-fashioned popcorn and he asked his wife and children, “What do you like best about our family? When others come over what do you most want to show them?” He said, “We had the most incredible conversation. We decided, for instance, that we are not tourists, but we are travelers. We help others to fly—and much more.”

When his daughter got in trouble with the principal, he said, we were unsure of our way into this conversation with her. Then we remembered our family mission statement that included, “We bring people together.” Suddenly we had a way to talk. Feiler said, “If you want to make yourself a better person, you have to identiy what psychologists call their best possible self.” For them that was tied up in their mission statement and answering the question, “Who do we want to be as a family?”

“It was in there,” he said. “It is a reminder of what we want and identified for all of us what we try to live up to.”

Storytelling Games: You can do story telling games in your family—like the autobiography game where beginning at the youngest ages children can tell stories about themselves.

He noted that this is important to practice regularly. Research has shown, for instance, that Asian families concentrate more on discipline, order and structure in their conversations together. American families were more apt to tell elaborative stories. It isn’t surprising that over time, the nature of conversation in Asian families was more about structure, and American children focused more on the story about who they are.

Research has shown if your child or grandchild has a big test tomorrow, an athletic competition or some activity that involves achievement, if you tell a story the night before the event about how you have done well at this in the past, going back into your own history, you can boost your performance going forward.

You can also embed the togetherness narrative you want to create as you talk together about your vacations or shared experiences. Let each child create a little narrative about what happened today. On a trip you might make a short video of their experience. Share each other’s viewpoints on the same event.

One set of grandparents who read Feiler’s story in the newspaper, decided instead of doing a “Take Your Children to Work” day, they took their grandchildren to the cemetery to tell stories.

Make story telling a key component at dinner. Feiler uses what he wryly calls the “Hunger Games” at dinner to give his children the chance to tell stories. One of those games involves having the kids bring a new word to dinner and an explanation of the story behind how they learned it.

Use Photos for Storytelling: Now more photos are taken every day than in the first hundred years of photography. Take photos and use them for story telling.

Feiler says that stories bind. Children with the most confidence have a strong sense of an intergenerational self.

His column in The New York Times that flew through the Internet summarized the issue:

“Decades of research have shown that most happy families communicate effectively. But talking doesn’t mean simply ‘talking through problems,’ as important as that is. Talking also means telling a positive story about yourselves. When faced with a challenge, happy families, like happy people, just add a new chapter to their life story that shows them overcoming the hardship. This skill is particularly important for children, whose identity tends to get locked in during adolescence.

“The bottom line: if you want a happier family, create, refine, and retell the story of your family’s positive moments and your ability to bounce back from the difficult ones. That act alone may increase the odds that your family will thrive for many generations to come.”

I concur totally. When my children were younger I would tell bedtime stories every night...but not fairy tales. I would share stories from my history or from someone else in the family. The kids soaked them and have actually remembered many even years later.

Alma 48:17 Yea, verily, verily I say unto you, if all men had been and were and ever would be like unto Moroni, behold, the very powers of hell would have been shaken forever; yea, the devil would never have power over the hearts of the children of men.