The Latch on the Door was Broken | Meridian Magazine 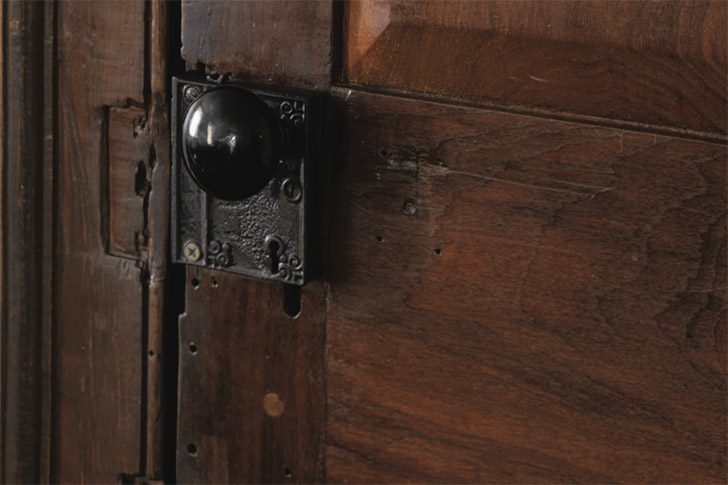 The Latch on the Door was Broken

One of my favorite spreads in the new Nauvoo Diary is for the week of June 14-20, 2021. The main photo on the left side of that spread is a vertical image of the door in the Carthage Jail that led to the jailer’s bedroom where he had placed the four prisoners, Joseph Smith, Hyrum Smith (his brother) and the two apostles, John Taylor and Willard Richards. The placement of the prisoners in this room by the jailer was an act of kindness, he feeling like they would be much more comfortable there.

Unfortunately, the latch on the door was broken and therefore the brethren were only able to hold the door closed against the onslaught of the mob by bodily force and pure muscle.  Hyrum Smith placed both hands on the door from a low angle, trying to get powerful leverage to force the door shut.  One rifle fired a ball through the door (you can see the hole it created in the door in the upper right of the photograph) which immediately entered Hyrum’s face, hitting him in the left bridge of his nose, penetrating to his brain and immediately felling the Patriarch. He cried out, “I am a dead man.”

This beautiful walnut “Christian door” remains in place to this day. The latch was later repaired and a small piece of the door that had been cut out was returned many years after the event (you can see that replaced piece of wood in the picture on the left side as well).

The inspirational quote that has been beautifully placed over the door in the Nauvoo Diary is from Joseph Smith and reads: “God Almighty is my shield; and what can man do if God is my friend? I shall not be sacrificed until my time comes; then I shall be offered freely.”

This beautiful photograph is one of the 120 full-color images that grace the Nauvoo Diary and will help you immerse yourself in the history of the Church in this coming year.

The Nauvoo Diary is the first of the new Heritage Journal Series.  Don’t miss a volume of these keepsake diaries and journals.  You can order this first one today at this link: latterdaysaintmag.com/nauvoo.