The Impact of Infants in the Healthcare Debate | Meridian Magazine 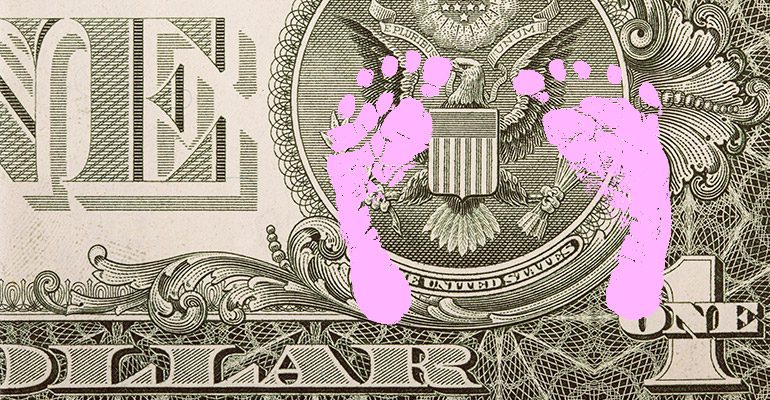 The Impact of Infants in the Healthcare Debate

Which would you rather pay for: a baby shower or a funeral? That’s the very real choice facing taxpayers in the health care debate today. By defunding Planned Parenthood, Americans could celebrate the arrival of thousands more babies — or fail, and find themselves back where they’ve been: financially shackled to the culture of death. Either way, liberals warn, there’s a cost.

Pulling the plug on the nation’s biggest abortion business, the Congressional Budget Office (CBO) estimates, would mean “The number of births in the Medicaid program would increase by several thousand, increasing direct spending for Medicaid by $21 million in 2017 and by $77 million over the 2017-2026 period.” That sounds like a lot of money until you consider that these same children will be pouring far more into the economy and workforce later on. And while the Left will argue that we can’t afford to encourage these births, research by the Marriage and Religion Research Institute (MARRI) proves we can’t afford not to.

Human capital is one of the driving forces of the economy. That human capital — our children — grows up to be our nation’s workers, its taxpayers, and its consumers. In more technical terms, former FRC expert Dr. Henry Potrykus found that “Overall GDP growth in the United States has been lagging for more than 50 years, a phenomenon known as the ‘growth slowdown.’ Human capital considerations, when they are tied to the demographics of the working population, explain this.” Think about it. In the last four decades, Americans have reduced the labor force by 58 million people through abortion alone. “The slowdown of GDP growth,” Henry elaborates, “is explained by the concentration of both population and human capital in the baby boom, which is now being replaced by lower human capital cohorts.”

He predicts that “the U.S. economy will continue to sputter over the coming years. This slowdown is amplified by the retiring of a generation with significant human capital (the baby boom) and its replacement by a generation inadequate in population size to continue the expected and required growth of the macro-economy.” Whatever investment the government makes to encourage these births is a small price to pay for the enormous return later — and not just economically, but in innovation and ingenuity.

Still, Planned Parenthood’s Cecile Richards’s says, any legislation promoting childbirth is “dangerous” and “must be stopped.” Even more shocking, she tweets, “Planned Parenthood is proud to provide abortion — a necessary service that’s vital to our mission.” So vital, apparently, that it’s willing to spend $1 million pressuring the White House to reconsider its position. (How many taxpayer dollars are they spending to defend taxpayer dollars?) “We want to hit in the heart of the Trump coalition,” a spokesperson said, announcing their intent to blanket red states with ads. With roughly half of the organization’s funding on the line, Richards is pulling out all the stops to repackage the group as a compassionate, cancer-curing women’s health organization.

There’s just one problem: the statistics tell a different story. Just a quick glance through FRC’s Planned Parenthood Fact Sheet will have you shaking your head in disgust. Liberals love to repeat the line that abortion is just three percent of Richards’s business — a number Slate’s Rachael Larimore called the “most meaningless abortion statistic ever”… “to the point of being downright silly.” The Washington Post didn’t pull any punches either, calling it “misleading.” Even National Public Radio called out the group for the lie, suggesting that a more accurate percentage of Planned Parenthood clients who have an abortion would be 10 percent. That’s not hard to imagine. In 2014, if a pregnant woman walked into a Planned Parenthood facility, she was 160 times more likely to receive an abortion than an adoption referral.

In the end, no one is suggesting that women go without the care they so desperately need. President Trump, congressional Republicans, and the majority of Americans are simply asking that they get it from community health centers — which not only serve 18 million more people a year but don’t perform abortions. And unlike Planned Parenthood, they have the added benefit of not being referred for criminal prosecution by the U.S. House! Here’s the bottom line: If thousands of nonprofits can perform quality community outreach without $550 million in taxpayer funds, so can Planned Parenthood.

Such people have bad conscience in the beginning. Then, they become desensitized, "past-feeling", but they also stifle whatever guilt feelings they may have by believing in their own lies that their abortionist approach is "protecting" women's health. Mental health experts call this denial of the obvious...

@David Durfee. You sound pro eugeneics. Margaret Sanger, who started Planned Parenthood, indeed wanted undesireable populations ie blacks to be destroyed. You saying "at risk" harming your family and country is promoting ethnocide. How about stopping the risk before conception instead of dismembering live human beings because they are defned as the problem. Innocent infants are that, innocent. Adoption should be promoted, not murder.