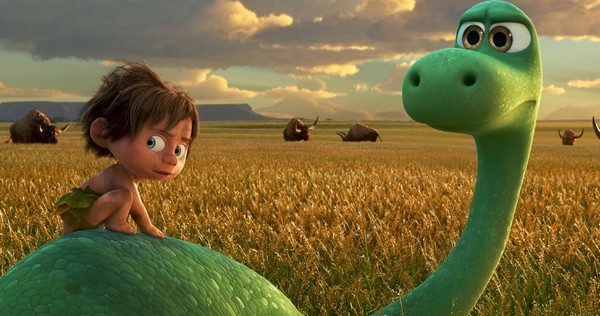 Note: A nondenominational version of this review appears on Brother Decker’s site yourfamilyexpert.com

WHAT’S IT ABOUT? In an alternate timeline, the meteor that wiped out the dinosaurs misses Earth. Millions of years later, an evolved, intelligent Apatosaurus embarks on an adventure with a human child.

IS IT ANY GOOD? (GRADE: B+) Disney and Pixar’s The Good Dinosaur is one of the most visually-stunning films I’ve ever seen; that’s enough to earn my recommendation for a big-screen HD viewing. While the film is highly derivative of previous Disney/Pixar uplifting heartbreakers like Bambi, The Lion King, and Finding Nemo (to say nothing of the cues it takes from Ice Age and The Land Before Time), the well-worn story is nevertheless very touching, and the characters have worthwhile arcs. The difference is in the details; there are endless creative flourishes here, from the Western tone to the clever twists on Tyrannosaurs and Pterodactyls. The movie is not terribly original, but it is thrilling, inspiring, and gorgeous to behold.

CONTENT OVERVIEW: The Good Dinosaur is rated PG. It earns the rating with several intense scenes of child characters in peril, the death of a supporting character, menacing villains, and the presence of some wounds and bruising. It is likely too frightening and sad (early on) for younger children.

MESSAGES TO DISCUSS: Love for others will help us to overcome fear (see 1 John 4:18). Doing good and “leaving your mark” on the world requires perseverance (see D&C 64:33).

Jonathan Decker is a licensed marriage and family therapist, film critic for The KJZZ Movie Show, and clinical director of the Online Center for Couples and Families. His book 250 Great Movies for Latter-day Families is now available in paperback and Kindle.

My daughter and grandson went to this movie expecting a great family friendly film. They ended up walking out with their large popcorn because there was too much death, destruction, and too much negative (murderer) name calling for the little cave boy, etc. The last straw was when they ate the fruit and were hallucinating as if on drugs! She told him she was kind of disappointed in the movie, then asked him if he wanted to stay or leave. He chose to leave! Wise little man!

We asked our daughter about this movie just last night. She had taken her nine-year-old to the movie. Our daughter said the content was very disturbing and highly discouraged our going at all.