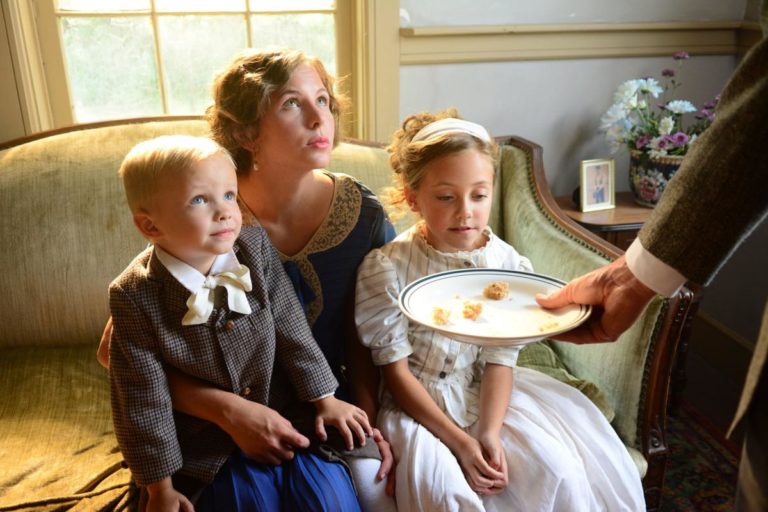 This week’s Pioneer Day celebrations provide an opportunity for us to remember the pioneers and all that they did to establish The Church of Jesus Christ of Latter-day Saints as we know it today. Most of the stories we will tell and share with our children will be those histories that end with the arrival of the saints in the barren Salt Lake Valley. Often we then skip forward to today with appreciation for their sacrifice and inspiration for our own struggles, but there were many other pioneers between that famous arrival and the present whose stories are worth telling and retelling.

One such story is that of former middleweight boxing champion Willard Bean and his wife Rebecca as they receive a call in 1915 to reverse the path of their pioneer ancestors and return to Palmyra, New York to occupy the Joseph Smith farm that the Church had recently acquired and attempt to reestablish the Church in that area. “The Fighting Preacher”, a new film from director T.C. Christensen tells their story and beautifully paints the picture of what a fight it was to settle in a place that had driven out the Mormons 85 years before, but had still not forgotten how to resent them.

Though T.C. was told about their story many years ago, he just couldn’t see how to reduce their 25-year mission—the longest in the history of the Church—into a narrative that would work on the big screen. “It just seemed like a bunch of episodic events,” he said. He read A Lion and a Lamb, a book written by the couple’s grandson about their experiences and just “didn’t know how to make it into a movie,” despite the frequency and persistence with which people kept bringing the story to his attention.

What finally clicked was understanding the true objective of his protagonists. “[Willard and Rebecca’s] goal is to accomplish what they’ve been sent to do; to work the farm and turn the hearts of the people,” said Christensen. The nature of the match that this faithful couple were fighting was not something that would be completed in a few good punches or a few good rounds. Turning the hearts of the people would take patience and persistence and Christlike service and the journey to discover what that could look like is at the heart of the film.

In fact, for me, that is what made this film uniquely moving. We are accustomed to conflicts that have sometimes dramatic, but ultimately simple and fairly quick solutions in film, but the Beans were faced with a task that would take every ounce of their 25 years to begin to complete. Ultimately, their story is told over time in a way that manages to be both present and engaging, while still being truthful about the fact that hearts take time to change and enduring to the end can’t be accomplished in a day.

I appreciated the sense that the Beans didn’t know the end from the beginning and their first big attempt at community outreach—a boxing exhibition for locals to challenge Willard in a match—was filled with sincere hope that it would turn the tide, but it ultimately failed to accomplish what they hoped. There was something sincere and real in the way that they had to try, try again and try something different and fumble with solutions; a process we will all have to come to terms with when life inevitably doesn’t go as we planned.

T.C. shared that part of the fun of this project was working with the real-life accounts left by the Beans about their experiences. “All of the films I have made are true stories and especially with the pioneer ones; you just kind of have a thread of what happened. You don’t really know that much depth to it.” But Willard Bean was an extensive journal keeper with an incredible memory. “With this story, Willard writes down a lot of detail and sometimes even dialogue, where he would write what he said to that guy on the Hill Cumorah and what the guy said back to him.”

In this case, the ‘guy on the Hill Cumorah’ was its overtly hostile owner who communicated his thoughts with a shotgun when the Beans approached him about possibly purchasing the land. It takes someone with a unique humor to look down the barrel of a gun in that moment with his wife at his side and say, “thank you for the warm welcome to your community.”

Ultimately, that lighthearted humor (that was true to Willard Bean’s journals) added some delightful laughs to the film and must’ve had a disarming effect on the people of Palmyra. The Beans did acquire the Hill Cumorah on behalf of the Church, a feat which President Heber J. Grant said “came about providentially” in the General Conference where it was announced. Part of that providence was, no doubt, in the particular people the Lord sent to get it. In addition, the Beans were eventually instrumental in securing the Martin Harris and Peter Whitmer Farms.

Rebecca Bean also provided firsthand accounts of their experiences that were integral to this cinematic retelling of their story. Upon their return to Salt Lake City, Rebecca gave hundreds of firesides about their experience and T.C. was able to listen to a full-length recording of one of them from not long before she passed away in June of 1976.

In fact, Rebecca was as essential to their impact on the community as her husband. She is ultimately the one that gently and persistently suggests that showing an increase of Christlike love may do more than a good left hook.

In the film, she is pregnant with her first child when they arrive in Palmyra and goes door to door in search of a nurse or a midwife to help her only to be met with door after door, slammed in her face. Despite the derision and meanness that her vulnerability is met with, it is these very women who would later reap the benefits of her guileless charity and service.

First timer Cassidy Hubert who portrays Rebecca in the film said it was her tenderness and humility that stood out to her. “I don’t naturally have that personality where I could be so forgiving,” said Hubert, “That really impressed me. Her quickness to forgive.”

Most likely, in her heart, Rebecca Bean didn’t feel that forgiveness instantaneously, but she saw miracles that kept her going in daily discipleship and the service led to love and the love to more service. In an experience that is portrayed beautifully in this film, Rebecca Bean had a miraculous vision that gave her comfort and motivation at a time when she was feeling spent with the daily toils of her life on the Smith farm.

The vision is described at length in her own words in this Meridian article published in Friday’s issue, but in essence, after a day so difficult that she cried herself to sleep, she was given an incredible vision of the Savior. In it, He promised her that if she would “go about [her] work everyday as [she had] done it this day, [she] would be equal to it.”

That is the message and the impact that “The Fighting Preacher” had on me. It is, as T.C. has repeatedly quipped, “the best Church History story you’ve never heard of”, but the true power of it is in its simplicity. Gospel living is a marathon, not a sprint and though the Beans experienced miracles, it was ultimately 25 years of day-to-day efforts and choices that were the key to their long-lasting impact that has blessed us all.

When the Savior came to Rebecca Bean in vision, He did not say He would clear the way so that she would not have such demanding days. He said that if she continued in the work, He would make her equal to it.

Or as Willard would put it; to complete your personal, sacred assignment ‘you just have to keep swinging.’

“The Fighting Preacher” hits theatres across Utah on July 24, 2019.

We just got to see this beautiful film and it is just playing here in Novemberr in Calgary Alberta. What a testimony of the power of ministering to others & how powerful service can be in our lives. Great missionary tool. I want to read the book! I wish that notification could be sent to Church PR reps of upcoming movies produced by TC Christiansen or others & that are going to be shown in theaters. There are times that good movies are only shown for a week or sometimes they only play for a weekend. By the time we hear from other Church members, it is gone! One movie about the missionaries who were held captive only played 2 days!

My husband & I read the book & saw how the Beans overcame the adversity & completed their mission for the Church. They weren’t released for 25 years & were heartsick to leave when they were released. We are so disappointed here in Ontario, Canada that this movie will not be shown here. There are so many Saints who would love to see this movie.