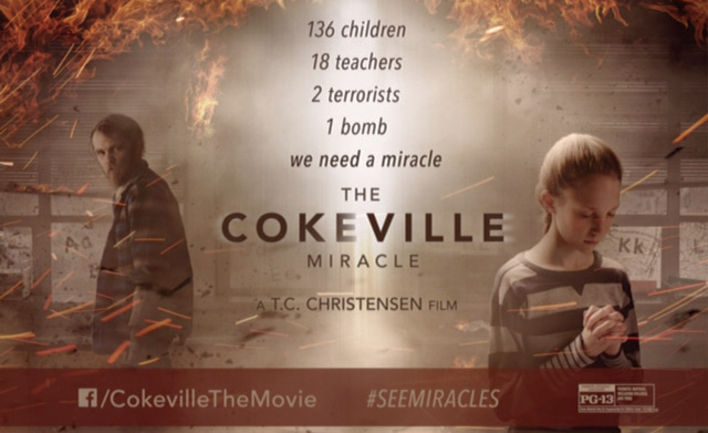 The Cokeville Miracle is Faith-Affirming

Editor’s note: The Cokeville Miracle will be released in theaters on June 5th. This advance review originally ran in Brother Decker’s site www.moviedad.com. Reprinted with permission.

WHAT’S IT ABOUT? Tells the true story of a 1986 elementary school hostage crisis and bombing, in which the children claim to have been protected by divine intervention.

IS IT ANY GOOD? (GRADE: A-) Believers in Jesus Christ are the target audience for The Cokeville Miracle, but doubters and skeptics may also find this true story to be fascinating and moving. Writer-director T.C. Christiansen departs here from Latter-day Saint historical dramas (such as 17 Miracles and Ephraim’s Rescue), delivering a modern thriller with a more broadly Christian appeal. In the process, he’s made his best film yet.

Christiansen’s greatest strengths have always been his evocative visuals (he’s also a cinematographer) and the sincere, raw emotion he brings to his storytelling. Less consistent (though generally solid) has been the strength of his dialogue and the performances he gets out of his actors. In these areas, The Cokeville Miracle rises above his past efforts, with Jasen Wade and Nathan Stevens (as a doubting police officer/father and the insane bomber, respectively) leading the charge with riveting performances. Supporting performances are likewise excellent, although Sarah Kent (as Wade’s wife) wrestles with a role that, in my opinion, is written as too judgmental and critical.

Unlike most based-on-a-true story films, The Cokeville Miracle follows the actual history very closely, with some minor tweaks to facilitate narrative flow. The pacing is perfect, and the editing elicits both incredible tension and poignant beauty. Some might say that this film is unbalanced, making few concessions to nonbelievers as it, rather boldly, asserts that God and angels had a hand in saving lives that day. But Christiansen merely follows, and portrays, the evidence provided in police reports and the accounts of those who were there. Even skeptics may be constrained to admit that, as one character says, “this is too much of a coincidence to be a coincidence.”

CONTENT OVERVIEW: The Cokeville Miracle is rated PG-13. There is no foul language, sexuality, or nudity. The rating is for the intensity of the story (children in peril and threatened by an armed maniac) and some violence and blood, though none of it is gratuitous or over the top. (spoilers) A man is shot in the back. A man shoots himself off camera. A man shoots a woman who is burning alive (this happens very fast). Children display burn wounds. Christiansen (the director) finds the right balance between showing enough to make it feel real and displaying restraint and respect.

MESSAGES TO DISCUSS: It’s natural to feel hatred towards those who are cruel, but choosing to forgive will bring us peace. There is a God, and He will reveal himself and help us if we believe in Him enough to ask. Even though the world is full of violence and malice, we can see miracles and goodness if we’re open to them.

Buy the book, The Cokeville Miracle: When Angels Intervene, in paperback here or on Kindle here.

Jonathan Decker is a licensed marriage and family therapist available for face-to-face and online webcam sessions. He’s also a film critic for KJZZ-TV, Mormons at the Megaplex, and Movie Dad. His book, 250 Great Movies for Latter-day Families, is available in paperback and Kindle.

"Some might say that this film is unbalanced, making few concessions to nonbelievers..." This comment made me want to see the movie even more!! There's nothing worse than a movie based on a true story that waters down its message to try to appease the secularists.

I remember this incident from the newspaper accounts and the TV news about it. It was a sacred story of protection of the children told from their own mouths. It shows that we are never alone; we are always being watched over.