The Boy Who Discovered He Had Leprosy | Meridian Magazine 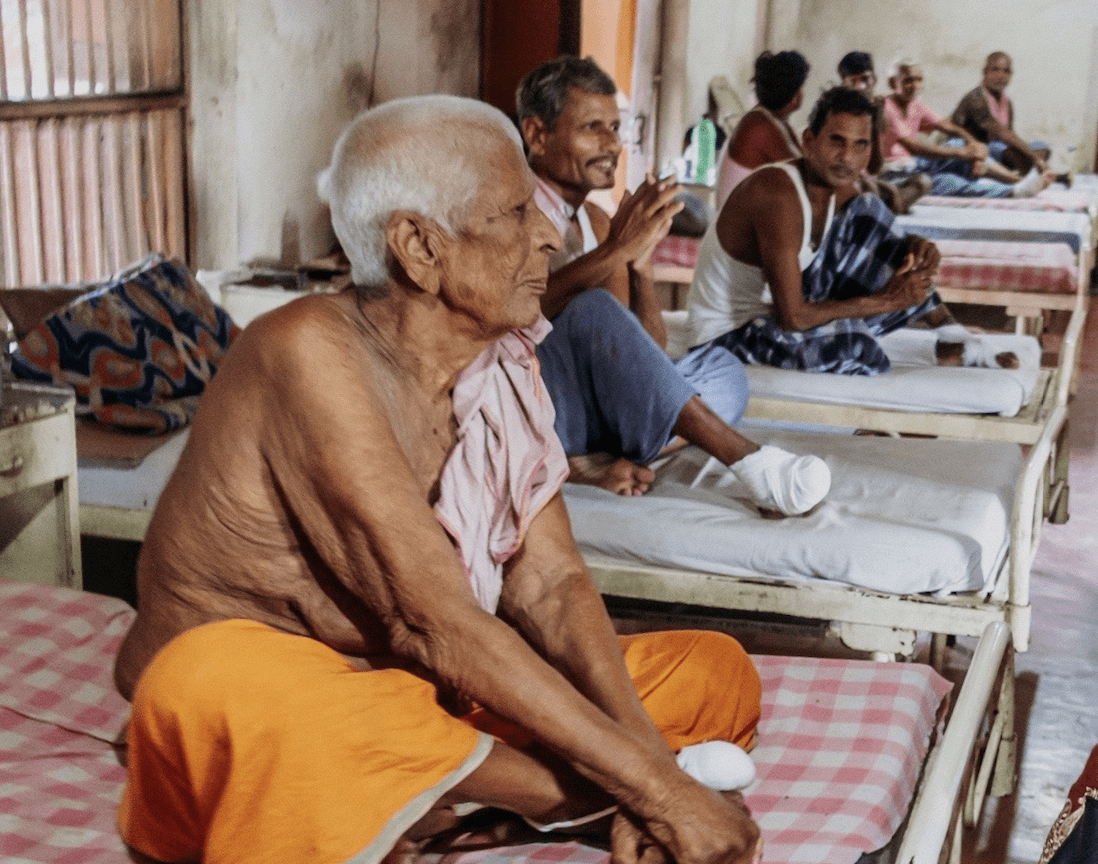 The Boy Who Discovered He Had Leprosy

Thank you to our Meridian readers who have responded so generously to the humanitarian project we are doing with the Rising Star Outreach Foundation to build a school for the children of the leprosy-affected in Bihar, India. As of this writing we have raised more than $120,000 of the $200,000 we are looking to raise. With the matching grant from an anonymous donor, we will have a combined $400,000 to build this school. Some of you have given large amounts. Much of the money has come in $25 or $50’s. We all have that good feeling to know we’ve done something to help someone today who will have no opportunity without us. You can follow our progress and make your donation at risingstaroutreach.org/meridian. All of the money raised will go directly to the school.

It is astonishing that the cure for a disease that we thought was eradicated centuries ago was only found in 1988. Yet even more remarkable is that many new cases are found every year and are untreated because the stigma is so great against the leprosy-affected. They fear being disdained, abandoned by their families and friends, cast off and cast out if their disease is detected. Even if they receive treatment, it is not by a doctor because nearly all of them run from treating someone sick with leprosy.

One of the important things that happens at the Rising Star Outreach’s beautiful school in Tamilnadu, is that every child is consistently screened for leprosy so they won’t get the disease as their parents or grandparents have. Here is a story about one boy who discovered he had leprosy.

Rubbing sleep from his eyes, Fran then reached up to feel if the rough spot on his face had gone down during the night.  It hadn’t. Was it possible that the skin was even a little more raised? Eyes completely open now, Fran jumped up and sidled into the kitchen where his mother was already awake and beginning preparations for breakfast. Fran rubbed the lid of the small pot his mother sometimes used until he could see his reflection. Leaning in, he checked his reflection in the lid. The red spot on his face did not appear to be going away.

His mother saw him and observed, “it’s the same, my son—except it’s growing bigger.” She weighed her next words carefully. “Maybe we should go to the hospital and get it checked.” Fran’s eyes widened. Hospital? For a small spot on his face?  He felt uneasy about his mother’s words—he felt there was something his mother was not telling him. An unspoken word hung in the air. Leprosy. Surely his mother did not think this spot could be the dreaded leprosy?

Fran shook his head back and forth vigorously; an emphatic NO! But his mother was now eying him even more closely. “This afternoon,” she said. “We will get it checked this afternoon.”

Poor people in Bihar, India don’t normally go to doctors. The truth is, almost none of them have a family doctor. If they have a medical need that they can’t cure at home, they go to the hospital. A trip to the hospital can consume hours, often nearly half a day or more. That was the case this time. After what seemed an interminable wait, Fran’s turn finally came.

The doctor initially seemed gruff and exhausted. Nearly every day he felt overwhelmed with the endless lines of people needing his attention. His manner could be short and curt. But as he looked at the patch of raised skin on Fran’s face, he felt a cold dread run through him. This certainly looked like it could be a spot of leprosy. The doctor sent a biopsy for the lab to analyze.

The next time the doctor met with Fran and his mother, his demeanor seemed to have changed. Knowing how the entire family would be affected, he almost gently delivered the dreaded results. Fran had leprosy. For many in India, this dreaded word was not only felt like a death sentence, it carried the weight of a devastating social stigma—one that could affect the standing of the entire family.

Unfortunately, the small clinic/hospital that Fran had gone to didn’t have the means to treat Fran. He would need to seek out other treatment. “But where?”, the anxious mother asked desperately. The doctor shrugged. Most hospitals were not willing to or were unable to treat leprosy. There was a little hospital many miles away in a place called Little Flower that could possibly help him. It was clear up at the top of Bihar, nearly to the border with Nepal. The doctor cautioned that even if there was room for Fran at that hospital, treatment could take up to a year.

For a family of extremely limited means, such a long trip would be difficult. But after heavy reflection, Fran’s mother felt like she had no other option. Fran’s father had died many years earlier and the mother was left with nine children to raise.  Fran was the sixth. She would need to ask neighbors to watch the younger brother and sister while she made the arduous journey. She didn’t dare tell the neighbors why she had to go so far, as she feared they would refuse to allow her children into their home.

Finally, all arrangements were made and after offering prayers, Fran and his mother set off for Little Flower in Sunderpur, India. The mother’s unease was increased even more, when finally arriving in Sunderpur, she was informed that Little Flower was actually in a leprosy colony. The thought of entering a leprosy colony sent chills of fear down her spine. After coming all this way, she almost felt her courage desert her.

But a mother’s love engenders courage that otherwise would be unthinkable. Holding Fran’s hand firmly, she led him through the leprosy colony and to the little hospital that would hopefully give them the hope that they were so desperately seeking.

Entering the dark hospital ward, Fran’s mother almost gasped in disbelief. This was a hospital? It was nothing but a long room with beds lined up on both sides. The beds were filled with older men, some of them with disconcerting deformities. They stared at the boy dolefully. Many of them had been there sitting on their beds, receiving treatment for leprosy for many months. For some of them, the treatment had taken more than a year.

It was August and the room was stifling hot. There were no working fans, in fact, there didn’t seem to be any electricity; the room was dark even though the sun was blazing outside. (the hospital only has power about two hours a day). Fran’s mother noticed that the windows were so darkened with soot and dirt, they let very little light in.

Finally, the “doctor” examined Fran. He wasn’t a real doctor; only a former leprosy patient who had been healed at the hospital and was now trying his best to help others, in spite of his lack of training. Fran’s mother insisted that he see a real doctor. The examiner shook his head sadly, I’m sorry, but we have no doctor. I’m the best that we have. But the good news is, I think we can cure your son with daily doses of multi-drug therapy. To leave her beloved son in these conditions seemed impossible to the mother. But in the end, having no other alternative she hugged him to her and with tears running down her face, told him her prayers would be with him. Then she left. Fran had never felt so alone.

This was August 2018. Now 14 years old, Fran has been receiving treatment during the past year at the hospital. When I asked our volunteer at Little Flower how Fran was doing, this is what she wrote,

Fran is seen as a light in the hospital. He is the youngest long-term patient at the hospital and given that the leprosy is on his face, he is completely mobile. This allows him to help the other patients, move around the hospital and interact with the staff and visitors regularly. You can often find Fran in the Rising Star Outreach dressing room where he helps other patients with wounds on their feet and legs get to the room and then to the dressing tables where they have the wounds cleaned and bandages changed.

He is often a leader when volunteers come to sing and dance with the patients in the hospital and has the biggest smile and most joyous laugh for a child in his condition.

We’ve asked our volunteers to tutor Fran every day so that he doesn’t get further behind in his studies. As soon as the patches on his face have gone down, he will be enrolled in the Little Flower school, currently being run by Rising Star Outreach. Given this young man’s determination to make something of his dreams, along with the support and love of his family, we expect him to be an enthusiastic and successful student. With the excellent education offered by Rising Star Fran now has the opportunity to not only improve his own life, but with the possibility of college training now available to him, he can one day return and raise the living conditions of his entire family.

A former Executive Director at Rising Star Outreach, Amy Antonelli, once commented to me that she felt that perhaps that leprosy in the family has turned out to be the greatest advantage these children’s lives could possibly have because it makes them eligible for our programs. With our school graduates going on to pharmaceutical college, medical college, engineering college, and other great careers, these students will have the opportunity for a shot at life that very few children in their original villages will have.

I have reflected on Amy’s words many times. We can often feel picked on, and even beaten down, by life’s challenges. Yet, there are times when those challenges become blessings in disguise. If we can learn to view our challenges as God views them, perhaps we can find the courage to face them and go forward in faith.  And as in Fran’s case, if we can learn to see other people as people of unlimited potential, instead of defining them by their challenges, I believe we begin to see them as God sees them. Only then are we able to treat them as God would have us treat them.

Oh, if we could only learn to see as God sees! Each one of us are children of glorious eternal parents. To our Heavenly parents, each child—each life—has equal value. If we could treat each other with this one simple truth in mind, the world would be a different place today.

You can help a child like Fran. Please make your contribution to risingstaroutreach.org/meridian

God bless you, DMT! Your words humble and inspire all of us! Becky Douglas

If you listen to Meridien Magazine Come Follow Me podcasts, you will learn why they have picked this charity, who started it, why, and the heartrending stories surrounding the leper families. Although we have no extra money, it moved me to act. These people on the other side of the world are shamefully treated by their own country. I signed up for $5/mo. donation...