The Angels that Intercede in the Gathering of Israel | Meridian Magazine 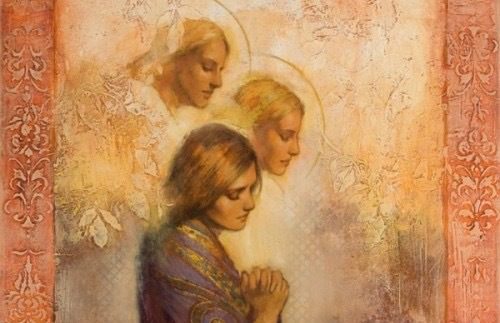 The Angels that Intercede in the Gathering of Israel

Cover image: “Angels Among Us” by Annie Henrie.

As members of the Church of Jesus Christ, we have been given the privilege to gather Israel on both sides of the veil.  President Nelson has told us that absolutely nothing happening on the earth right now is more important.  We’re not alone in this arduous yet joyful pursuit. There are angels available and willing to help us.

Angels can be influential in all areas of the Gospel, from gaining a testimony to temple work.  Average members as well as missionaries can receive help as the following true stories illustrate:

Elder F. Enzio Busche shared an experience of when he was the first visiting authority after the first Spanish stake was created in the Los Angeles area:

“At the stake conference, a sister from Nicaragua bore her testimony.  She told how her husband had been killed in the middle of the civil war in    Nicaragua.  Her family was living in dire circumstances, and she was always asking God to help her understand the pain and the difficulties they were going through.  They were visited by two men dressed in white who   told her that she would receive a visit from two young men, and they would give an answer to her prayers.”

“A week later, two missionaries came to her door, so she listened to them very carefully.  She told them, ‘I was waiting for you because two men in white announced that you would come.’  They did not understand what she meant. They told her that there were no other missionaries around and especially not ones dressed in white.  The sister, in tears, then bore her testimony that those two men were holy angels who came to prepare her because she would not have listened to the missionaries otherwise.  She bore her testimony that through the help of those missionaries, she was finally able to immigrate to the United States and could save her children from the onslaught of the terrible war.”  (F. Enzio Busche Yearning for the Living God p. 240-241)

Elder Busche also tells about angelic intercession in the conversion of a man from Belgium named Joseph Gilbert.  After being a member for a year, Joseph went to the Swiss temple, and while there, had a revelatory experience:

…“he saw in vision a great gathering of his ancestors who were looking at him and pleading with him, ‘Please, don’t forget us.  It took a great effort to get ONE of our descendants to embrace the gospel.  We have all waited a long time for this.’” (F. Enzio Busche, Yearning for the Living God, p. 212-213)

His ancestors took special care to single him out.  Have they singled you out?  Have they helped soften your heart? Your neighbor’s heart? You’re investigator’s heart?

Lane Brown, (not his real name) had just received his mission call to Nicaragua.  In preparing to go on a mission, he decided to go do temple baptisms.  As he was in the confirmation area, with hands on his head, and eyes closed, he felt the presence of his deceased grandfather.  He had never met him on this earth but KNEW that it was him.  Lane, out of the blue, blurted out, “Gramps, how are you?”  He was surprised to feel himself communicate with his grandfather.  Lane then felt him say, “I’m so proud of you. “Tell your mom you will be safe.  (Lane’s mother had been very anxious about him going to Nicaragua, which at that time was a fairly dangerous place), Gramps continued: “I’ll be there to prepare and soften hearts of people on your mission.  If you’re obedient to mission rules, you’ll be protected.”

On his mission, when Lane was Zone Leader, his Mission President said, “For September, I feel prompted that we need to have 500 baptisms.  Go pray and see how many you and your companion will do.”  Elder Brown and his companion did just that.  They prayed individually about this goal.  Lane felt kind of nervous setting such lofty ambitions, but he felt his grandfather saying, “Don’t forget, I’m in this with you!”

When he and his companion compared prayers, they found that they both came up with the number 23, which was many times the 3 that the average companionship achieved.  Lane could feel help from his angel grandfather as they more than achieved their goal and felt his continued aid in the conversion of many more souls on his mission.

“My beloved brothers and sisters, I testify of angels,… In doing so I am       testifying that God never leaves us alone, never leaves us unaided in the challenges we face.”

“…the Father of us all is watching and assisting. And always there are         those angels who come and go all around us, seen and unseen, known and unknown, mortal and immortal.” (Jeffrey R. Holland, Oct. Conference        2008)

President Nelson echoed this theme when he said:

“The Lord so declared: ‘I will go before your face.  I will be on your right hand and on your left, and my Spirit shall be in your hearts, and mine angels round about you, to bear you up.’ What a promise! When we are faithful, He and His angels will help us.” (Russell M. Nelson, April Conference, 2011)

While in the MTC, a missionary, (John Nelson) had a remarkable experience.  His companion’s mother had died shortly before he left on his mission.  As John was practicing giving the discussions to this companion, he received a “lightning bolt” in his mind and heard the words, “Elder Nelson, I need you to love my son, and I need him to know that I’ll be with him and help him on his mission.”  Elder Nelson shared that amazing understanding with his companion.  It was a great blessing to him, knowing that his mother was aware of him, and would aid him on his mission, from that side of the veil.

“You will also find that the Lord puts helpers by your side—on your right, on your left, and all around you. You do not go alone to serve others for Him.”  (Henry B. Eyring, “Trust in That Spirit Which Leadeth to Do Good” April Conference 2016)

“I Need You to Find My Family!”

When Matt Hill was in the MTC, he was trying to learn Spanish.  During one particular meeting, he was very discouraged, and didn’t think he could do it.  He heard a voice say, “Elder Hill pick up your head.  I need you to find my family!”

Fast-forward 2-3 months.  He and his companion were in a tiny pueblo, and some little girls playing caught his attention.  As he looked at them and the home they were playing near, he had a strong feeling come over him and heard words that said: “That’s my house!”

Even though it was late, Matt convinced his companion to knock on that door.  They were allowed in the house and as they were trying to gain common ground with the family, Matt’s eyes were “pulled” to a picture on the wall, of men in uniform on a police force photo. His eyes were drawn to one particular man.  He asked the woman, “Who is that?”  She quietly said, “That was my husband. He’s dead.”  At that moment, Matt got chills, and felt a further confirmation from the spiritual realm, “This is my family!”

Over a period of time, Elder Hill and his companion were able to baptize this lovely family.  At the baptism, the woman sobbed, “I know my husband is here!”  She had felt a tremendous nudge from her deceased husband to accept the Gospel and be baptized.  She felt that he was so happy that they were joining the Church.

Pray for Angels to Help Us

Praying for angelic help in missionary work is a powerful tool.

Elder Holland says it very simply as he states:

“You may even want to ask God for His angels to walk with you where       you presently do not want to tread.” (Russell M. Nelson, “Four Gifts that Jesus Christ’s Offers to You”)

“So, could you use a little more help in your life?  If so, keep your      covenants with more exactness than you ever have before! And then ask for angels (a.k.a. your ancestors and other loved ones) to help you… Or     ask for them to be dispatched to help those you love! (Wendy Watson    Nelson, Covenant Keepers P. 30)

Because of the great amount of temple work that has been done in the last few years, there is a veritable army of engaged angelic beings to help us bring about this work of conversion, especially within our family lines.  This is a work they want to help us accomplish. They have a convincing power, and the ability to soften hearts that can aid us in this work.  Let’s ask for their help in gathering Israel.

In Power and Great Glory

My dear friends, you will rejoice in knowing that you are a significant part in the long-foretold gathering of Israel, preparing Christ’s coming in ‘power and great glory, with all the holy angels.’” (Dieter F. Uchtdorf,          April General Conference, 2019)

The veil is very thin.  This work of gathering is the greatest work we can be involved in.  Missionary work, temple work, and nurturing family, can all bring about angelic help!  They come to embrace us with support, love, and means to gather individuals and families into the joy of the Gospel.  Let’s ask for their help, – then look for them!

My grandmother Anna Maria Theresia Lormess Fischer was converted to the Gospel of Jesus Christ by her Catholic Priest who had suddenly died. He appeared to her at dawn pointing to a book he held in his hands. It was the Book of Mormon...and then he was gone. My grandmother did not know he'd died that week and searched for the book until she finally found it laying by a trash can in Breslau, Germany after WWI. She read it and was converted. She found the missionaries, they did not find her. Her story is shared on my FamilySearch's Memories page. That is how our family became members of our church. Through angels that have passed.

This is so inspiring and I know from personal experience that angels do help us. Thank you for reminding us. I love Annie Henrie's painting!