The Abiding Faith of the Pioneers at Winter Quarters | Meridian Magazine 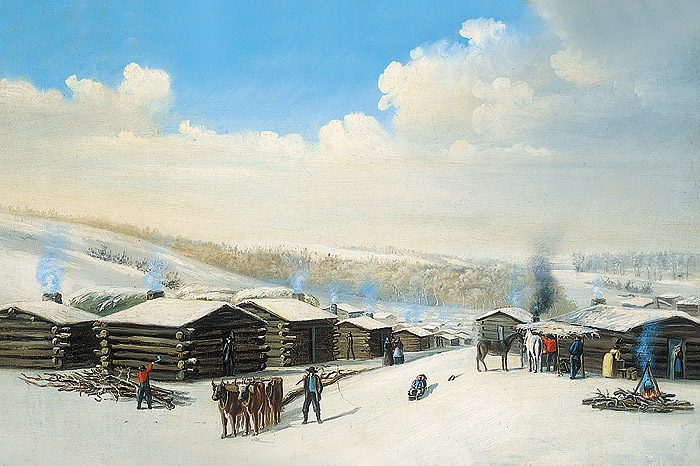 The Abiding Faith of the Pioneers at Winter Quarters

Editor’s Note: Maurine Proctor had two grandmothers in her mother’s line who died and are buried in Winter Quarters. She will always remember the sacrifice of Eveline Golden Conover and Lydia Owen.

Trees, grass and grave markers of Pioneer Cemetery on the hill at Winter Quarters adjoin the Temple. Though there are many old headstones here, there is poignancy in the fact that all of the graves of the more than 600 Saints who died here are unmarked.

Winter Quarters was a city put up by a people too ill, too spent, whose supplies were too limited with a season too short to make it to the Salt Lake Valley. Here is a glimpse of what happened there:

Like Garden Grove and Mt. Pisgah before it, Winter Quarters was another instant city. Brigham noted with some satisfaction, “I went through the city-where nine weeks ago there was not a foot path, or a cow track, now may be seen hundreds of houses and hundreds in different stages of completion-impossible to distinguish the rich from the poor. The streets are wide and regular and every prospect of a large city being raised up here.”(1)

With husbands and brothers gone in the Mormon Battalion or off in Missouri on trading or working trips, there would be a glaring absence. A census taken at the end of 1846 revealed a population of 3,483, only 500 of them men. Many thousands more were spread from Council Bluffs eastward across Iowa. Those men who were left carried a heavy burden to help feed the people. Brigham called to his followers, “Unite with us in the principles of self-preservation,”(2)and the people did, sacrificing personally for the welfare of the community.

Benjamin Brown, called to be a bishop of one of the thirteen wards in Winter Quarters, looked at his new stewardship with some trembling. He wrote, “We could not put in any grain until the next spring. We began then more than ever, to feel the destitution of our position for want of vegetables had brought on the scurvy, the provisions of many were exhausted, and our prospects of a fresh supply seemed rather distant…One of the wards was committed to me, and this, of course, entailed upon me the care of the poor-no trifling matter under such circumstances. It would take no small space to describe all the expedients to which I was driven in fulfillment of this duty, for the little stock I had of my own was soon gone, and still the poor had not done eating. What was to be done? I went to President Young, and very pathetically told him that all my grain was gone, and I had not the first shilling in my possession with which to get any more grain. All the consolation I got from him was some instruction to feed them well and take care they have enough to eat, and it would not do for a Saint to say he could not. So I had to scheme. I borrowed ten dollars from a sister who possessed a small store. I then crossed the Missouri River, and laid the money out in meal and some meat. But when this was gone I had to borrow of someone else to pay her, and then of someone else to pay him. I borrowed until I made my debt up to fifty dollars, and no more chance of payment appeared than at the first. Who could not have been a bishop then? Fortunately, just at this juncture, the lost cattle of one who had died in my ward came into my hands, and I sold them for fifty dollars. I paid my debt and I was just right, and ready to commence borrowing again with a clear conscience.”(3)

At the north end of the pioneer cemetery at Winter Quarters is this sculpture by Avard Fairbanks depicting a father and a mother standing beside the shallow, open grave of their child. President Hinckley mentioned at the dedicatory service on Sunday, April 22, that he felt this was the greatest work Brother Fairbanks ever did.

Borrowing, working, trading, or back-breaking industry couldn’t stave off the hunger of that season. Once the wild grapes, plums and berries that the pioneers had feasted on had withered away, the Saints turned to the scant diet of coarse flower and corn meal, a diet which , without vegetables brought on Winter Quarter’s worst disease-what the pioneers called black canker or scurvy. John D. Lee described it as a disease “that falls into the feet and legs and commences on the toes first with a pain, then they die away without feeling and so on continuing until the person expires.”(4) The canker swelled their gums, turned their flesh black and ate it. Their heads hurt, their joints aches, their fevers raged. One woman, spent from delivering a stillborn child, said, “The scurvy laid hold of me, commencing at the tips of the fingers of my left hand, with black streaks running up the nails with inflammation and the most intense pain, and which increased till it had reached my shoulder.” The flesh would rot and drop off, some to the bones,”(5) another recalled.

The chills and fever, tuberculosis and exposure all took their toll on the driven people, and the cemetery at the place they came to call “Misery Bottoms” began to fill, leaving families without fathers and mothers, parents with empty, aching arms for lost children. Best estimates suggest that six hundred died there. Another twelve hundred died at Council Bluffs. One out of every three babies passed away in infancy. So great was the concern for survival in that long, dark season that there was little time for mourning the dead. Archibald Gardner recorded that “when little Janet died [there was] so much sickness that care of living left no time for mourning the dead-the baby [was] laid away hurriedly and unceremoniously.”(6)

Morning light begins to add warmth to a wagon at Winter Quarters.

Skeletally thin, Jane Richards, her own babies already dead along the trail, spent her winter nursing dying Elizabeth, her sister wife, and her child in a twelve-by-fourteen-foot cabin just big enough for two little beds and a fireplace. She had wood for a fire only when she begged for it. Then, when the sister wives ran out of food, she traded her last possession of any worth, Franklin’s violin, to Brigham Young’s nephew for a gallon of wine. She was grateful to trade it for anything. During the dark winter, by sipping it sparingly, like two stranded birds, the women managed to stay alive. When Jane hurried along the snowy paths to visit her sisters in the sociability that made life bearable, ice clung to her tattered skirts. She wrote, “Often my clothes would be frozen stiff about my ankles remaining so day after day that you could hear them rattle as they struck against anything. What was there to thaw them out?”(7)

Still, in what must have seemed like a living nightmare, they praised God, looked for his grace, and hung on.

Lorenzo Snow living in a fifteen-by-thirty-foot cabin with a dirt floor and turf chimney, even managed to throw a party. He covered the floor with straw, hung the walls with the sheet casings from the long-ago discarded feather beds, and lit the room with tallow dips stuck in hollowed-out turnips. Lacking a band, the guests entertained themselves with songs, riddles, and recitations. Refreshments were a bowl of succotash. It was not much of a party by today’s standards, but in that bleak mid-winter, it was a moment of warmth the guests would always remember.

Full-scale reconstruction, with detail, of cabin at Winter Quarters (now located inside the Visitor’s Center). Ursulia Hascall, an early Saint in Winter Quarters, recorded: “We have a brick chimney and hearth (two thirds of the people have them made of sod and they do very well)…The furniture consists of sacks, barrels, chests, trunks and…my chest for a table…I think we shall get along first rate.”

That January in a room of Heber C. Kimball’s log house, Brigham Young received a revelation that would become section 136 of the Doctrine and Covenants. In that revelation, the Lord gave the pattern for the exodus. The companies were to be organized with captains of hundreds, captains of fifties, and captains of tens. They were to select an advance pioneer company to leave for the West in the spring with teams, seeds, and farming utensils: this company would put in spring crops in their new place of refuge. Each company was to bear in equal proportion, according to the dividend of their property, the poor, the widows, the fatherless, and the families of those who had gone into the army.

The Saints were also to prepare houses and fields for those who would be left behind. All these things were to be done with a covenant to walk in all the ordinances of the Lord. The promise for those who would obey was clear: “Go thy way and do as I have told you, and fear not thine enemies, for they shall not have power to stop my work. Zion shall be redeemed in mine own due time.”(8) As winter melted into spring, the citizens of Winter Quarters, Council Bluffs, and a string of temporary settlements across Iowa began casting their eyes west toward the setting sun. None of these towns was meant to be a permanent resting place. Brigham Young wanted a mountain range between the Mormons and their old enemies. Those who had endured the winter with their faith intact were as tested and tough as any pioneers who would ever head west. The limits of their faith had been tried and not been found wanting.

This was a very timely article as we are preparing to take our stake priests and laurels there this weekend. Thank you!

Thank you so much for sharing this today. I needed to be reminded of God's Hand being in all things ...especially when we suffer. Those pioneers are Home now with the Father and Savior they loved and lived for while here on the earth!