The 2021 Hill Cumorah and Nauvoo Pageants Are Canceled | Meridian Magazine 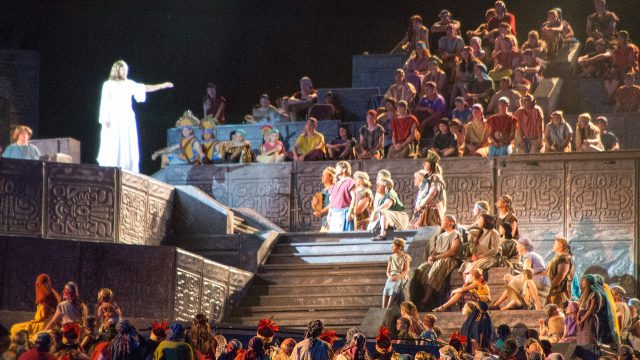 The 2021 Hill Cumorah and Nauvoo Pageants Are Canceled

The ongoing impact of the COVID-19 pandemic has made it necessary to cancel what would have been the final season of the Hill Cumorah Pageant originally scheduled for summer 2021. The pageant will not be held in future years. The Nauvoo Pageant will also not be held in 2021, but is intended to resume in 2022.

In place of these performances in 2021, the Church plans to broadcast the 2019 Hill Cumorah Pageant. The event is meant to commemorate the tens of thousands of volunteer participants that have made these performances what they are over the years. The broadcast will be available beginning on July 9, 2021 and can be accessed at broadcasts.ChurchofJesusChrist.org.

The video will also be available dubbed in Spanish and Portguese.

Details on the status of other pageants are below:

The annual Nauvoo Pageant is scheduled to resume July 5-30 2022.

The British Pageant will continue every four years under area leadership. The next performances are also scheduled for 2022, though exact dates will be released at a later time.

The Mesa Pageant was put on hold when the Mesa Temple began renovations in 2018. After those renovations are complete, the pageant will resume its annual schedule supervised by area leadership.

I am so saddened that the Hill Cumorah Pageant is gone forever. My family had plans to attend in 2020, flight booked, and ready to book hotels in the area, when it was cancelled. My family participated in the 2000 pageant, and it would have been our 20th anniversary. We live all across the U.S. now, and it would have been a family reunion for us. We were planning to attend in 2021 as consolation. I don't know why this pageant is forever cancelled because it brought in up to 10,000 people every night, all prospective investigators, and gave attendees the chance to visit the Sacred Grove, Smith homestead, and Palmyra. When I lived in Pennsylvania, we attended every year from 1982, when we joined the church. I know it's probably the cost. I am just so devastated that the pageant is nevermore.