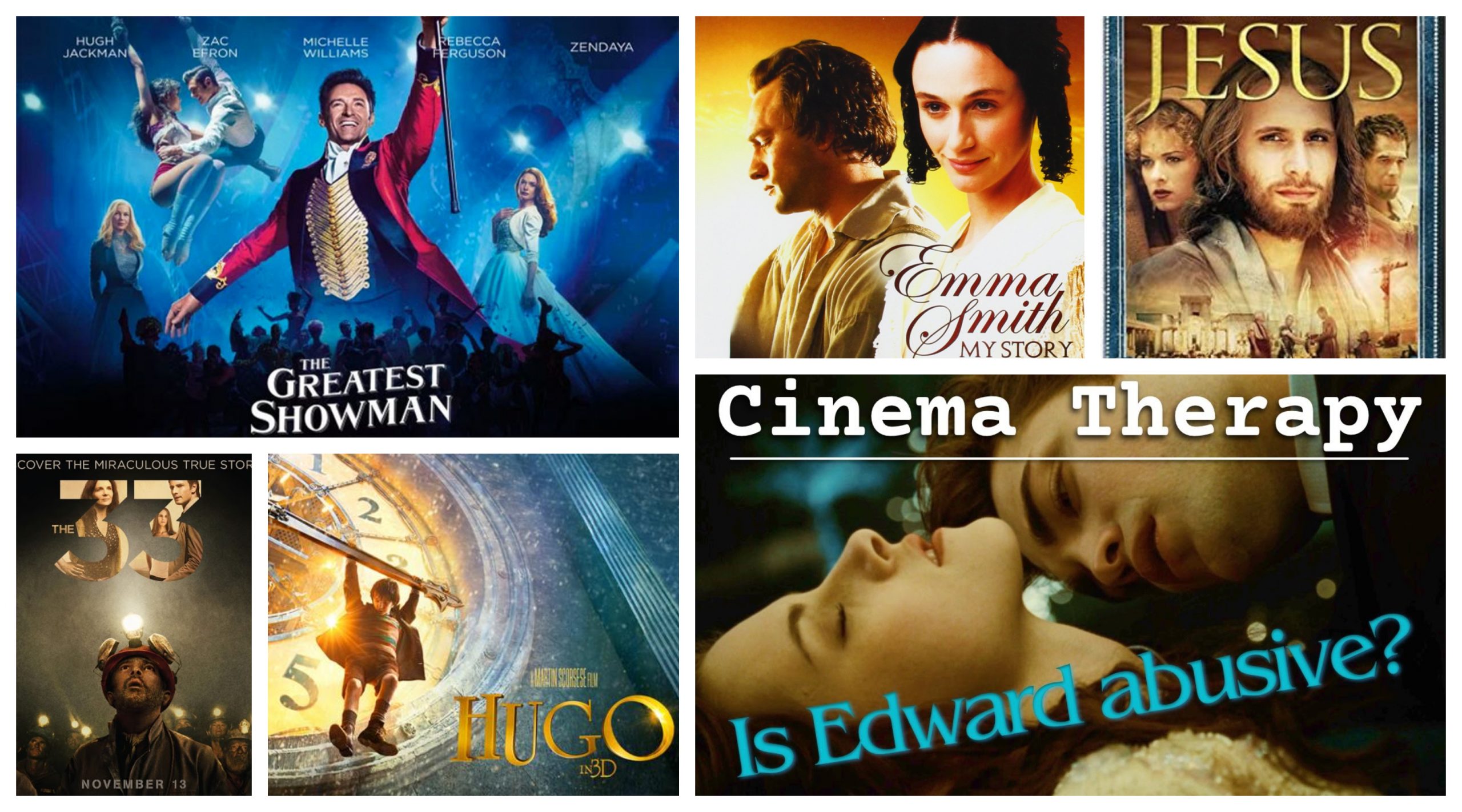 Twilight (Part Two). Cinema Therapy is a YouTube channel started by two Latter-day Saints, one a therapist (yours truly) the other a filmmaker (Alan Seawright). We explore themes from family therapy and psychology as illustrated by popular films. Last week we explored whether or not the dating portrayed in Twilight is healthy. This week we look at red flags to pay attention to in dating, as demonstrated by the same series. Watch our episode above and rent or buy the film here.

Emma Smith: My Story. Powerful and insightful biopic, from the makers of Joseph Smith: Prophet of the Restoration, tales the inspiring and heartbreaking story of Emma. Without shying away from topics like plural marriage, the film promotes faith in the Gospel of Jesus Christ and respect for this elect lady. Well-acted, smartly-scripted, and lushly-filmed by T.C. Christensen. Watch it on Living Scriptures and rent/buy it here.

The Greatest Showman. Hugh Jackman, Michelle Williams, Zack Efron, and Zendaya star in this (very loosely) based-on-a-true-story musical hit about circus producer P.T. Barnum. Wholesome, family-oriented, with stunning music and dancing, what’s not to love? Watch it on Disney Plus or rent/buy it here.

Hugo. Legendary director Martin Scorcese takes a break from foul-mouthed, ultra-violent mobster movies and lends his talents to a family film. The result is a masterpiece for all ages, in which a young Paris orphan finds a surrogate family, flees a police officer, and helps filmmaking pioneer George Melees make peace with his tragic past. It’s gorgeous and magical. Watch it Netflix or rent/buy it here.

The 33. True story of Chilean miners trapped underground, fighting for survival, and the herculean efforts of rescue workers to get them out. The story that captivated the world, told with an excellent cast led by Antonio Banderas. Watch it on Hulu or rent/buy it here.

The Ultimate Gift. Beautiful Christian film in which a spoiled rich young man must perform a series of character and faith-building tasks before he can claim his inheritance, falling for a single mother along the way. Perfect for Sunday.

The Last of the Mohicans. Michael Mann’s epic adaptation of the novel about a half-Native tracker who romances an upper-class damsel during the French and Indian War is a must-see for its iconic musical score, bold direction, and stellar performances by Daniel Day-Lewis and Madeline Stowe. Watch it with Clearplay filters to set your own limits for content.

Jesus. TV miniseries with Jeremy Sisto as the Savior, Debra Messing as Mary Magdalene, and Gary Oldman as Pontius Pilate is as well-acted, emotionally grounded, and compelling as this story has ever been told onscreen, but takes artistic liberties with the source material, so your mileage may vary. As a film critic, I loved it. Biggest draw (or your biggest complaint) is its portrayal of Christ as a great man living a normal life who gradually comes to understand his divine identity and destiny. Watch it on TubiTv or rent/buy it here.

Penelope. One of my favorite romantic comedies of recent years has Christina Ricci as an isolated young woman who hides herself from the world because she has a pig nose. James McCavoy is the charming drifter who falls for her. Wonderful story of the true meaning of beauty. PG for a few mild innuendos. Rent or buy it here.

Multimedia Personality Disorder. While at Brigham Young University I performed with Divine Comedy, the student humor troupe that gave birth to Studio C. My skills, specifically, were as an impressionist, as demonstrated in this skit in which a young man on a date cannot help but impersonate movie and TV characters, to the young woman’s dismay.

Good movies, all. But I must note that "The Greatest Showman", however awesome it is, isn't even close enough to fact to be called "based-on-a-true story." It is my favorite musical ever, mind you, but read about the man's life on Wikipedia first so that you know that you are watching something that is probably 95% (or more) fiction . . . but 100% inspirational and uplifting. I watch it at least once a month.