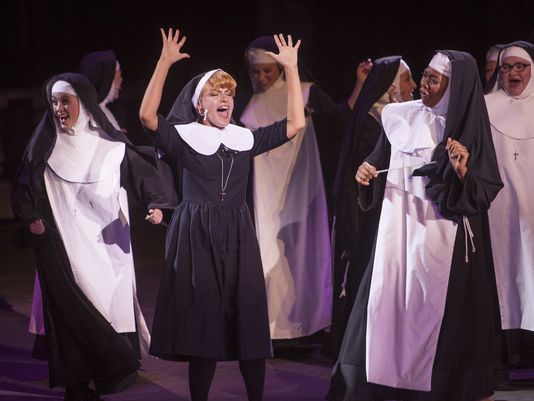 Though it borrows the basic storyline of the Whoopi Goldberg film from the 90’s, this Broadway version of Sister Act is very much its own animal. Now playing at the Tuacahn Ampitheatre in Southern Utah, the adaptation changes the setting to 1970’s Philadelphia, giving the whole production a groovy Motown/disco vibe that adds immensely to the charm. Add to that music by famed Disney composer Alan Menkin, a perfect cast, and Tuacahn’s gorgeous setting, and you’ve got the recipe for a marvelous night at the theatre.

Like the film, this play finds a lounge singer on the run from her gangster boyfriend, taking refuge in a convent, where she gives the nun choir some much-needed “soul power.” With respect to Tuacahn’s other offerings this summer (Disney’s Beauty and the Beast and When You Wish), Sister Act is arguably the most fun you’ll have this season. It’s very funny, and the gospel-and-funk-flavored music got more crowd response than any of the other shows.

Much of the humor, and ultimately much of the heart, comes from the culture clash between the sacred cloister and secular singer, and while it leans towards mild irreverence, it never goes into sacrilege, largely because the religious characters are treated with integrity and respect. Still, this one is not for the younger kids, partially because the content is more mature (it’s a bump from G to PG level, with mild language and innuendo), but also because the story isn’t aimed at them. For everyone else, however, it’s a blast.

For tickets to Sister Act, or any other show at Tuacahn, click here.