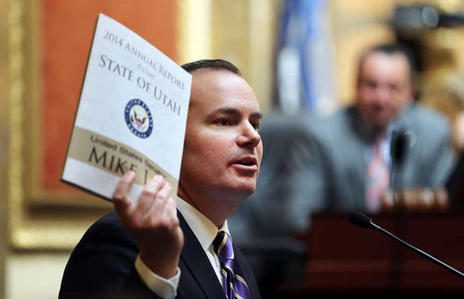 Surrounded by appreciative Christian college leaders, Sen. Mike Lee, R-Utah, announced Wednesday that he would soon introduce legislation to protect religious organizations from discrimination by the federal government that could arise because of their conscientious support of traditional marriage.

Lee introduced similar legislation in December 2013 that did not advance. But Wednesday’s announcement was framed as a direct reaction to the issue of tax-exemption and religious belief raised before the Supreme Court in Obergefell v. Hodges, the same-sex marriage case that will likely be decided this month.

“The response uttered by Gen. Verrilli was troubling, to say the very least,” said Lee, who had attended oral arguments in the case.

Lee’s announcement, made in the Russell Senate Office Building, included few specifics about the bill. But he said it would protect religious institutions and individuals from retaliation for their conscientious beliefs about marriage.