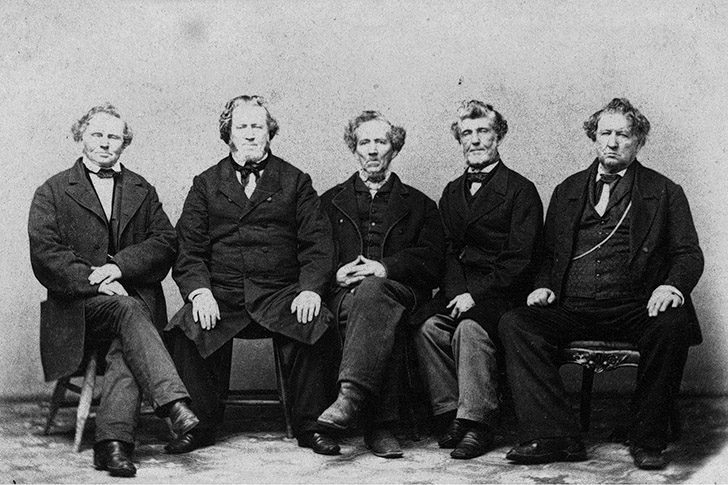 Samuel’s account of his third mission to Livonia, New York. John and Rhoda Greene, Phineas Young, Brigham Young, and others join the Church through Samuel’s efforts. The Smiths move from the farm at Manchester to Waterloo, New York, and are treated with great kindness and enjoy a season of peace.

Samuel returned from Canandaigua the same day that my husband was liberated from the cell.1 After relating to us the success he had met with at Canandaigua, he gave us an account of his third mission to Livonia:

“When I arrived at Mr. Greene’s,” said he, “Mrs. Greene informed me that her husband was absent from home, that there was no prospect of selling my books, and even the one which I had left with them, she expected I would have to take away, as Mr. Greene had no disposition to purchase it, although she had read it herself, and was much pleased with it. I then talked with her a short time and, binding my knapsack upon my shoulders, rose to depart; but, as I bade her farewell, it was impressed upon my mind to leave the book with her. I made her a present of it, and told her that the Spirit forbade me taking it away. She burst into tears, and requested me to pray with her.2 I did so, and afterwards explained to her the most profitable manner of reading the book which I had left with her; which was, to ask God, when she read it, for a testimony of the truth of what she had read, and she would receive the Spirit of God, which would enable her to discern the things of God. I then left her, and returned home.”

All of the Young Brothers were blessed by Samuel’s mission. L-R: Lorenzo, Brigham, Phineas, Joseph and John Young.

I shall now turn aside from my narrative, and give a history of the above book. When Mr. Greene returned home, his wife requested him to read it, informing him very particularly with regard to what Samuel had said to her, relative to obtaining a testimony of the truth of it.3 This, he, for a while, refused to do, but finally yielded to her persuasions and took the book and commenced perusing the same, calling upon God for the testimony of his Spirit. The result of which was that he and Mrs. Greene were in a short time baptized. They gave the book to Phineas Young, Mrs. Greene’s brother, who read it, and commenced preaching it forthwith. It was next handed to Brigham Young, and from him to Mrs. Murray, his sister, who is also the mother of Heber C. Kimball’s wife. They all received the work without hesitancy, and rejoiced in the truth thereof. Joseph Young was at this time in Canada, preaching the Methodist doctrine; but, as soon as Brigham became convinced of the truth of the gospel, as contained in the Book of Mormon, he went straightway to his brother Joseph and persuaded him to cease preaching Methodism and embrace the truth, as set forth in the Book of Mormon, which he carried with him.

Thus was this book the means of convincing this whole family and bringing them into the Church, where they have continued faithful members from the commencement of their career until now. And, through their faithfulness and zeal, some of them have become as great and honorable men as ever stood upon the earth.4

I shall now resume my subject. The first business which Samuel set himself about after he returned home was preparing to move the family to Waterloo, according to the revelation given to Joseph.5 And after much fatigue and perplexities of various kinds, he succeeded in getting us there. We moved into a house belonging to an individual by the name of Kellog. Shortly after arriving there, we were made to realize that the hearts of the people were in the hands of the Lord; for we had scarcely unpacked our goods, when one of our new neighbors, a Mr. Osgood, came in and invited us to drive our stock and teams to his barnyard, and feed them from his barn, free of cost, until we could make further arrangements. Many of our neighbors came in and welcomed us to Waterloo, among whom was Mr. Hooper, a tavern keeper, whose wife came with him, and brought us a present of some delicate eatables. Such manifestations of kindness as these were shown us from day to day, during our continuance in the place. And they were duly appreciated, for we had experienced the opposite so severely, that the least show of good feeling gave rise to the liveliest sensations of gratitude.

Having settled ourselves in this place, we established the practice of spending the evenings in singing and praying. The neighbors soon became aware of this, and it caused our house to become a place of evening resort for some dozen or twenty persons. One evening, soon after we commenced singing, a couple of little boys came in, and one of them, stepping softly up to Samuel, whispered, “Mr. Smith, won’t you pray pretty soon? Our mother said we must be home by eight o’clock, and we would like to hear you pray before we go.”

Samuel told them that prayer should be attended to immediately. Accordingly, when we had finished the hymn, which we were then singing, we closed the evening services with prayer, in order that the little boys might be gratified. After this, they were never absent during our evening devotions while we remained in the neighborhood.

1 This was probably during the first part of October 1830.

2 Lucy records in her Early Notebook, as dictated to Martha Jane Coray, that Rhoda Young Greene “afterwards told me that she never saw a man that had such an appearance or ever heard such a prayer in her life. ‘My God,’ said she, ‘it seemed as though the very heavens were rent and the Spirit of God was poured down upon us.'” (Early Notebook, pp. 35-36.)

3 In the Early Notebook, Mother Smith gives more detail of the conversation Rhoda Greene had with her husband, John: “‘Now, Mr. Greene,’ said she, ‘you certainly ought to do so and I will tell you how Mr. Smith says you must read.’ She then repeated Samuel’s testimony to her and added, ‘I do know that he would not tell an untruth for any inducement. I know he must be a good man if there ever was one.'” (Early Notebook, p. 37.)

4 In the Early Notebook, Lucy states: “Thus was Samuel’s sufferings in this instance the means of converting some of the most substantial and the greatest men who have ever subscribed their names to the truth; men who have never faltered nor slacked their zeal through every scene of trouble and privation for the truth’s sake” (Early Notebook, pp. 38-39). Through the instrumentality of Samuel Harrison Smith, nearly all of the extended Young family came into the Church. Apparently Phineas had received a copy (separate from the John Greene copy) of the Book of Mormon from Samuel and, being religiously inclined, decided to study the matter. “I thought it my duty to read it,” Phineas recorded, “as I had promised, and search out the errors, and as a teacher in Israel, expose such errors and save the people from the delusion. . . . I commenced and read every word in the book in the same week. The week following I did the same, but to my surprise, I could not find the errors that I anticipated, but felt a conviction that the book was true. . . . My father [John Young] then took the book home with him, and read it through. I asked him his opinion of it. He said it was the greatest work and the clearest of error he had ever seen, the Bible not excepted. I then lent the book to my sister, Fanny Murray. She read it and declared it a revelation. Many others did the same.” Phineas continued to preach the gospel as he understood it, trying to tie Methodism (which he had previously followed) to Mormonism. He could see that would not work. “About this time my brother Brigham came to see me,” Phineas continued in his account, “and very soon told me that he was convinced that there was something to Mormonism. I told him I had long been satisfied of that.” Within a short time the following were baptized: Father Young and his wife, Hannah; Brigham and Miriam Young; Phineas H. and Clarissa Young; Joseph Young; Lorenzo D. and Persis Young; John P. and Rhoda Young Greene; and Fanny Young Murray. The rest of the family would soon follow, including Susannah; Louisa; Nancy Young Kent and her husband, Daniel; and John Jr. (See Leonard J. Arrington and JoAnn Jolley, “The Faithful Young Family: The Parents, Brothers, and Sisters of Brigham,” Ensign, August 1980, pp. 55-56.)

5 The move to Waterloo took place sometime in October or November 1830. Waterloo was located about twenty-five miles east and south of the Smith farm in Manchester. The house where they lived was actually within the boundaries of Seneca Falls, the neighboring community (see Bushman, Beginnings, p. 173).

Such beautiful and powerful witnesses!! Thank you for sharing.