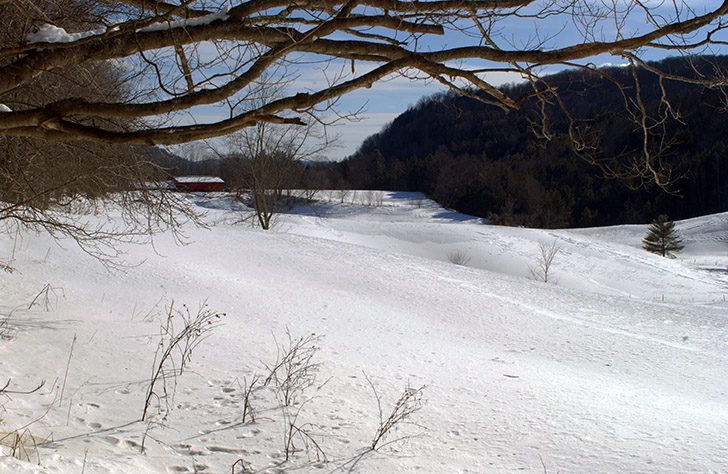 To celebrate the study of the Doctrine & Covenants this year, Meridian will serialize The Revised and Enhanced History of Joseph Smith by His Mother. To see the previous installment, click here.

A wedding present of one thousand dollars from Stephen Mack and John Mudget to Lucy. Six years on the farm at Tunbridge, Vermont. Two children, Alvin and Hyrum, added to the Smith family. Move to Randolph, Vermont.

Soon after I was married, I went with my husband to see my parents, and as we were about setting out on this visit, my brother Stephen[1] and his partner in business, John Mudget, were making some remarks in regard to my leaving them, and the conversation presently turned upon the subject of giving me a marriage present.

“Well,” said Mr. Mudget, “Lucy ought to have something worth naming, and I will give her just as much as you will.”

“Done,” said my brother. “I will give her five hundred dollars in cash.”

“Good,” said the other, “and I will give her five hundred dollars more.”
So they wrote a check on their bankers for one thousand dollars and presented me with the same. This check I laid aside, as I had other means by me sufficient to purchase my housekeeping furniture.

Having visited my father and mother, we returned again to Tunbridge, where my companion owned a handsome farm upon which we settled ourselves and began to cultivate the soil. We lived on this place about six years, tilling the earth for a livelihood.[2]

Winter on a portion of the original Joseph and Lucy Mack Smith Farm in Tunbridge, Vermont

In 1802, we rented our farm in Tunbridge and moved to the town of Randolph with our first two children, Alvin and Hyrum,[3] and my husband opened a mercantile establishment.

Notes
[1] Stephen Mack’s business enterprises started in Gilsum, New Hampshire, in 1787 when he was twenty-one. He then moved operations to Tunbridge in 1793. He would continue forging a successful career throughout his life and become one of the great developers of Detroit and Pontiac, Michigan, opening stores, running saw and flour mills, farming, and building for many years until his death in 1826. (See Anderson, Heritage, pp. 28, 180; Bushman, Beginnings, p. 19.)

[2] Joseph and Lucy lived on this farm from their marriage in January 1796 until 1802. A note of sadness is found in Joseph Smith Sr.’s patriarchal blessing book of 1834 where he addresses the Smith family and speaks of “three seats” vacated by death among his children: “The Lord in his just providence has taken from me at an untimely birth a son. . . . My next son, Alvin . . . was taken.” (See Bushman, Beginnings, p. 198.) Joseph and Lucy’s firstborn son was taken in death sometime between the middle of 1796 and the spring of 1797.

I find your revision fascinating, although I must admit I have never read either former editions. Great job.