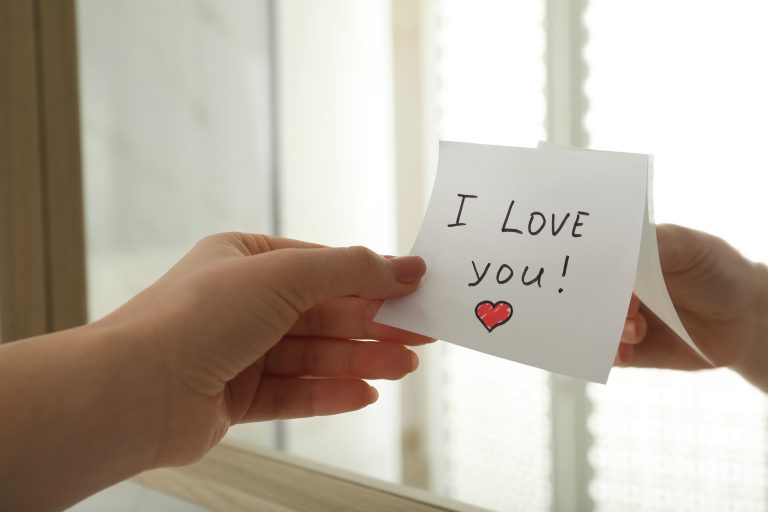 Recognizing Love Notes From the Lord

As you can imagine for someone who has grown up to be an actress, I spent much of my childhood listening to the soundtracks of musicals where others might’ve been listening to boy bands or pop stars. In particular, I loved the London cast recording of Les Misérables featuring Colm Wilkinson as Jean Valjean. I had nearly every word of the two-disc set memorized and I would sing them with gusto and spirit alone in my room.

I dreamed of one day getting to play a part in it. Specifically, I dreamed of played Valjean…and Javert…and directing the production, maybe in my neighborhood. I didn’t pursue that particular dream with any rigor, but when my senior year of high school came, the school announced they were doing Les Misérables, and I was thrilled to be a part of it. I was just cast in the ensemble—playing, among other things, the woman that buys Fantine’s hair.

It didn’t bother me that the part was small, I didn’t exactly think they would cast me in one of my dream roles—Valjean or Javert. I just loved having an excuse to hear that music and be a part of telling that story every day for a semester. I walked with a limp through every rehearsal because of course, my unnamed ensemble character had a dramatic backstory involving a carriage accident; and I welled near tears each night as I joined, with quiet but growing intensity, the finale chorus of “do you hear the people sing?”

Then came a weekend rehearsal where Javert and his understudy were out of town at the same time, both were traveling to a competition with the high school marching band. But we needed to do a full run-through, we needed the practice on lighting and sound and the transitions of both people and set pieces.

“Well, who should we have stand in for Javert?”

And, like a scene from a movie where the costume girl finally gets her chance to play Juliet, I said, “I know the part!”

I put my hair in a low ponytail, donned a heavy dark coat and sang with as much ominous orthodoxy meeting complexity as a 17-year-old me could muster. And so, against all odds, my childhood dream of playing Javert came true for one lovely afternoon.

I was driving the other day, some 14 years after the fact and it dawned on me just what a personalized little gift that was from the Lord to me. What are the odds that, in all the world, I would ever have the chance to live out my childhood visions of stepping in to a fully mounted production of Les Misérables in the unlikely role of Javert?

Fast forward to a decade after my Javert afternoon, I was living in an RV in Alaska with a brand-new baby, my first. The adjustment to motherhood was difficult. My love for this new little friend was overflowing, but the reality of suddenly having someone dependent on you for food 24 hours a day and never getting an opportunity to carve out any kind of identity outside of that, weighed heavily on my postpartum brain.

I desperately needed to know that I was still a creator—of things besides babies. I couldn’t be in a play; could barely muster the intellectual energy for a good conversation, let alone have enough to write anything decent. I poured all of my anxious, creative energy into voice over work, sending out a dozen auditions a day.

Our little RV sat next to a cow pasture where two sandhill cranes had taken up temporary residence and each time I would start, I would have to hold quietly for the cries of the sandhill cranes or the spontaneous moos from the cows to cease. I didn’t feel like much of a professional, but oh, I was trying.

I felt lost and amateurish and it felt like I might permanently be on a path that could never intersect with legitimate work, when who should check in to my mother-in-law’s AirBnB—to stay for a week in the very home whose driveway I was currently occupying in the middle of rural Alaska? Irene Bedard, the voice of Disney’s Pocahontas.

I loved Pocahontas as a child. Loved it so much, in fact, that when I wrote my first novel, I wrote that the main character loved that movie as well. I even had her talking to a stand-in Grandmother Willow on her property, as I had done as a child. There I sat, desperately trying to carve out a little voice over career for myself, when an iconic voice from my own childhood waltzed in. We shared several meals together over her week-long stay including a one-on-one breakfast where we discussed motherhood and careers while my little baby practiced trying to roll over on a blanket nearby.

Somehow, hearing her talk about the realities of her life and career, both made it all seem doable and made it all seem not glamorous enough to be worthy of the degree to which I was torturing myself for not having it. I left our conversation feeling both encouraged that it was all more accessible than it seemed, and sure that it might be ok if I didn’t get it in quite that way. Either way, it was a lift I needed; a divine nod from the Lord, to remind me that me and my little mobile voice over studio and my acting dreams were known of him.

What are the odds that the voice of one of my favorite Disney characters from childhood would come stay in my mother-in-law’s home just when I needed a little encouragement?

The most recent love note from the Lord came only a few weeks ago. I was attending an acting workshop taught by a coach from L.A. and at the end, we had a few minutes for a Q&A with her. While I felt my actual scene work in the workshop had gone well, that Q&A made me feel so out of the L.A. loop, I wanted to cry.

I went home deeply discouraged, feeling like my life’s trajectory has no obvious inroads to get me my chance to rub shoulders with film professionals that I deeply respect and be part of moving, resonant projects of which I could be truly proud. It felt as though I was traveling a parallel road and I couldn’t see how that life could ever cross with mine.

Exactly one week later, I sat in the audience of an improv show starring two improv artists that I had often watched on TV as a teen. It was exciting to see them live; to see them be clever on the fly, struggle a little, and persist. When the time came to look for volunteers for a game called “sound effects”, both performers’ faces turned right to me as though I were a magnet, and they handed me the mic. I hadn’t even raised my hand to volunteer.

The game involved them acting out a scene and I was assigned to one of them to provide all of the sound effects for anything he pantomimed. Now, for context, I am usually excellent at sound effects, I’ve even been paid several times to provide sound effects for video games and radio shows. But somehow, when he turned an invisible pair of keys to start an engine, I just couldn’t produce an engine sound worth beans. He teased me a little and kept trying while I struggled and giggled nearly to tears.

Eventually, he phoned “his wife” in the scene and I came on as her voice and said not only that “the engine is probably doing the best she can” but also, “dear, isn’t your truck a hybrid? I believe they’re silent under 5 miles an hour.” just to save myself from further embarrassment.

But the embarrassment didn’t end there. As they arrived to their scene’s destination, they went to use a bullhorn and I learned in the very moment, as I let out a committed and wild bellow that I have been mixing up “airhorn” and “bullhorn” all my life. They pretending to use the thing also called a megaphone, while I attempted to sound like that jarring noise that makes everyone jump at basketball games.

I failed magnificently. It was a comedy show after all, and the harder I tried, the more they teased. But no one was making fun of anyone, we were playing together. They even said at the end, “we should take you on tour with us to be a plant, that was fantastic.” Only the previous Saturday, I had felt that I would never get to perform with the people I would dearly love to work with, and within seven days I was handed the mic and got to do a scene with two dynamic, hilarious guys that I have watched on TV my entire adolescence. And apparently that scene may end up in their streaming comedy special.

What are the odds that that would happen?? You guessed it. With the Lord, they’re 100%.

Now, none of these three experiences changed my life forever. They weren’t career makers, or even hinge-points for the foundation of my testimony. They were just love notes. Sometimes the Lord sends us little blessings purely for the purpose of helping us remember that He knows us. He knows our desires. We are remembered.

These examples were all in the acting realm because that is an area rife with discouragement where I need a little extra divine nudging, but the Lord writes us love notes in every area of our lives. When have you seen His love notes in your life? Write them down (or even leave them in the comments below). What are the odds that if you give it some thought, you could remember a time that He reached out to you in an affectionate, simple, and personalized way? 100%.

I’ve always been conscious of the Lord’s tender mercies, but your expression of “Love Notes” truly warms my heart. It seems to pinpoint exactly what my heart feels towards my Heavenly Father and Jesus Christ as I remember they know my name…and my heart. Thank you for the reminder.

Yes last week I received a love message from my Lord in a strange form. I awoke to find the tiny diamond birthstone missing from my mother's ring. I was heartbroken. My daughter gave me the ring with my birthstone and mother's and her and her brothers over 30 years ago. Later I noticed something on the bathroom floor and picked it up but without glasses I wasn't sure it was even more than cat litter. Later I went back with glasses on and looked again.......yes? maybe? I taped it to a paper and took it and the ring to a jeweler who confirmed it was my tiny diamond. Now if that isn't a message of love I just don't know what is. HE also answers my prayers for more time to do family history every time I get sick. I KNOW HE LOVES ME!