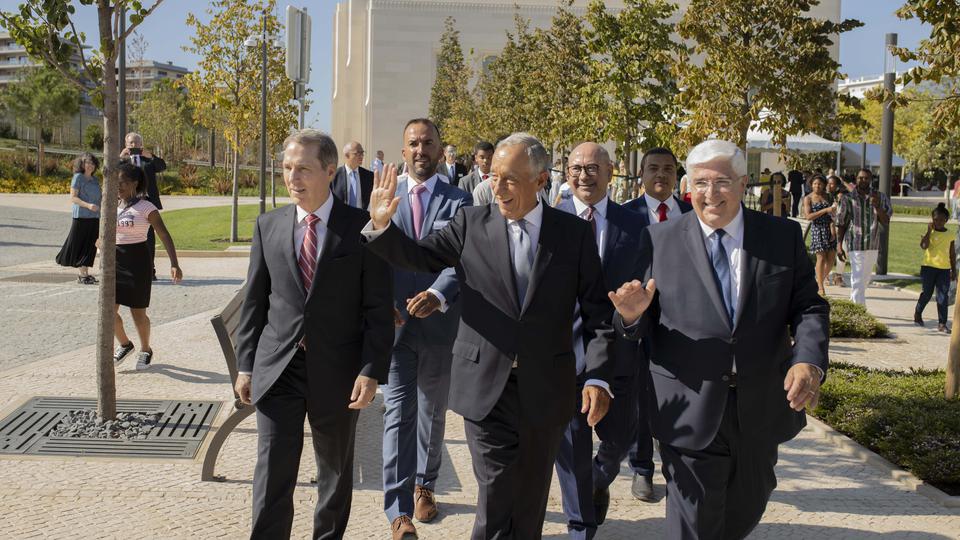 The President of the Portuguese Republic, Mr. Marcelo Rebelo de Sousa, toured the Lisbon Portugal temple of The Church of Jesus Christ of Latter-day Saints on 29th of August, 2019. On this historic occasion, the President of Portugal also received his own family history from Elder José A. Teixeira, of the Presidency of the Seventy, which included a framed four generation chart and a book documenting the ancestry of the President.

After being presented with his family history, President Rebelo de Sousa said,“My grandfather went to Brazil when he was very young. Then he went to Angola. He became a very well-known trader. These kinds of stories are so important. And I know that your Church is very much pro family, as I am. (The family) is the foundation of society.

Elder Teixeira, a native of Portugal and a convert to the Church, explained that family history research and the Church’s temples are closely linked. “Temples are sacred houses of God where we perform ceremonies for ourselves and on behalf of our ancestors that link our families together forever. That’s why we are anxiously engaged in genealogical research.”

In addition to Elder Teixeira, President Rebelo de Sousa was joined by Elder Gary B. Sabin, President of the Europe Area of the Church, and Elder Joaquim Moreira, who is an Area Seventy and is responsible for the temple open house.

The delegation toured the Lisbon temple and the grounds where President Rebelo de Sousa was given a first-hand look at the exquisite architecture and ordinance rooms where members come to learn about the purpose of life and make promises to serve Jesus Christ.

Elder Teixeira encouraged others to visit the temple during the open house, “I want people to come and see the temple. More than just being beautiful, it’s full of meaning, full of meaning for life and what life means to us as families. What we’re doing in the temple is not secret, it is special and sacred.”

There are currently about 45,000 members of the Church in more than 65 congregations in Portugal, many of them second and third-generation Latter-day Saints. The first missionaries to Portugal arrived in 1975, and a small congregation was organized shortly after.