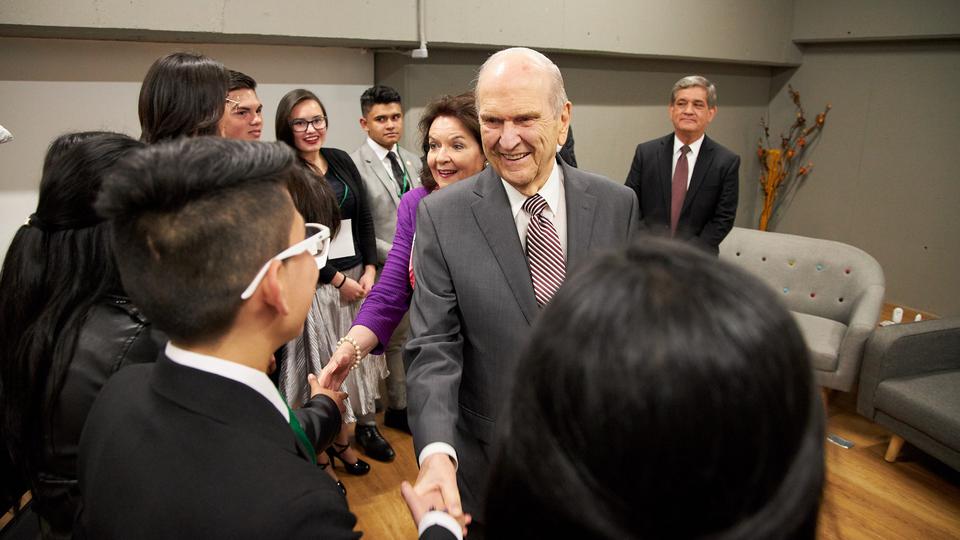 President Nelson Reminds Colombians What Is Possible Through Jesus Christ

“We receive great comfort from God when He says: ‘This is my work and my glory — to bring to pass the immortality and eternal life of man,’” President Nelson said in Spanish, quoting a scripture. “Both of His objectives are possible by the Atonement of His Beloved Son, Jesus Christ.”

The prophet reminded the assembled Saints during this second stop on his nine-day journey that God will bless them as they are faithful.

“Please, study the scriptures as families. Pray together. Renew your baptismal covenants by regularly participating in the sacrament [the Church’s weekly worship service],” President Nelson said. “Pay your tithes with grateful hearts. Attend the temple as often as your circumstances allow. There you can receive the blessings God has for His faithful children.”

The meeting originated from Movistar Arena in the capital of Colombia and was broadcast to Church meetinghouses throughout the country.

President Nelson was joined by his wife, Wendy, and Elder Quentin L. Cook of the Quorum of the Twelve Apostles and his wife, Mary, who are traveling with the prophet on a five-country ministry of Latin America.

Elder Cook pled with the people to develop their own faith and seek their own witness of the divinity of Jesus Christ.

“Many of you, if not most, have a testimony,” Elder Cook said. “We each need to strive for a personal testimony. President Joseph F. Smith [1838 –1913] said, ‘One fault to be avoided by the Saints, young and old, is the tendency to live on borrowed light [and] to permit … the light within them to be reflected, rather than original.”

Church scripture compares the highest level of heaven (known as the celestial kingdom) with the sun (a self-contained light) and a lower degree of heaven with the moon (a reflected light). In a similar way, Elder Cook said, the goal for a follower of Christ should be to obtain his or her own light from God.

“We cannot obtain the celestial kingdom and live with God the Father and Jesus Christ on borrowed light,” Elder Cook said. “We need our own testimony of Jesus.”

Sister Nelson said these are marvelous days, “filled to overflowing with the fulfillment of prophecies.” With so much going on, she said, “you and I don’t have time for things that don’t really matter. We only have time to understand truth and to do exactly what we came to earth to do. In order to do so, we need to do things the Lord’s way.”

Sister Cook reminded the Saints there are many ways to serve in the kingdom of God.

“Whatever we do, however we serve, we make a difference in someone’s life,” Sister Cook said. “And we serve our Savior. The Lord said, ‘Let your light so shine before this people, that they may see your good works and glorify your Father who is in heaven’ [see Matthew 5:16]. Brothers and sisters, we can wake up every morning and say, ‘This little light of mine, I’m gonna let it shine.’ We are blessed to be engaged in the greatest cause of all, ‘to bring to pass the immortality and eternal life of man’ [Moses 1:39].”

On Monday the senior Church leaders will travel to Quito, Ecuador, where an evening devotional will be held at General Rumiñahui Coliseum.

This is President Nelson’s fifth visit to Colombia. He first traveled to the country as an apostle in 1986. Former presidents Spencer W. Kimball and Gordon B. Hinckley have also visited Colombia.

The senior Church leaders have visited Guatemala and Colombia since they began their Latin America ministry on August 24. Other member devotionals and outreach meetings with government, religious leaders and media will be held in Ecuador, Argentina and Brazil. The Latin America ministry runs through September 2.

There are more than 205,000 Latter-day Saints in approximately 250 congregations in Colombia. Missionaries serve in five missions. The country has two temples, including the Bogotá Colombia Temple and the Barranquilla Colombia Temple.

President Nelson has been serving as the 17th president of the Church since January 2018. Since he was sustained, he has traveled to Europe, Africa, Asia, North America, South America and the Pacific to minister to Latter-day Saints and meet with government and religious leaders, as well as the media.