President Nelson on the Future of the Church: "Eat your vitamin pills. Get your rest. It's going to be exciting." | Meridian Magazine 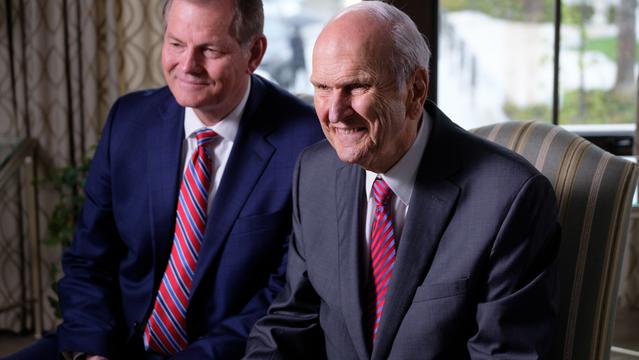 President Nelson on the Future of the Church: “Eat your vitamin pills. Get your rest. It’s going to be exciting.”

“We thank the Lord for His helping us to have a very successful event,” said President Russell M. Nelson following the dedication of the Concepción Chile Temple, Sunday, October 28, 2018.

President Nelson and his wife, Wendy, and Elder Gary E. Stevenson of the Quorum of the Twelve Apostles shared insights into their journey to South America during interviews with Newsroom and other Church media.

The temple dedication in Chile was the final event on their nine-day tour to five South American countries, which also included Peru, Bolivia, Paraguay and Uruguay.

“Everyone did their parts well,” said President Nelson. “And the people — they’re so loving and so anxious to serve the Lord and serve each other.”

“The Church is relatively young here in South America,” he said, noting the growth in membership on the continent. “Ninety years ago, nothing. … I’m 94 years old. I was born in 1924. … And now, former General Authorities were there and young people who have been in the Church for a long time. We saw four-generation families.”

“The Book of Mormon teaches over and over again that you need to have the ordinances,” he emphasized. “And of course, that’s why we have temples so that all the potential that God has in store for His children can become a fact, a reality. … No one else can offer perpetuation of the family unit beyond the grave. And that, according to our Heavenly Father, is the greatest gift that He can give to His children.”

“We’re witnesses to a process of restoration,” said the prophet. “If you think the Church has been fully restored, you’re just seeing the beginning. There is much more to come. … Wait till next year. And then the next year. Eat your vitamin pills. Get your rest. It’s going to be exciting.”

This was Sister Nelson’s first visit to South America with the Church president. “What’s caught my attention about that is to see how much the people love the Lord, and therefore they’re so drawn to the prophet. … I think lives were changed,” she said.

“I can fight tears pretty well, but when it comes to … witnessing about the prophet of the Lord, I feel it deeply every time,” said Sister Nelson. “It’s quite incredible. It catches me off ‑guard.”

“I have seen him changing in the last ten months,” said Sister Nelson. “It is as though he’s been unleashed. He’s free to finally do what he came to earth to do. … And also, he’s free to follow through with things he’s been concerned about but could never do. Now that he’s president of [the Church], he can do those things.”

A “heavenly crescendo” is how Elder Stevenson described Sunday’s temple dedication. “It just was really punctuated by the Spirit and the people and their preparation spiritually,” he explained.

“He is only reporting to the Lord, and he is fearless with that focus,” she said. “That and his passion for preserving the agency of others. This is not a man who will say, ‘you must.’ In fact, he said to me the other day, ‘I don’t even want to use the word must in any of my talks. I don’t like that word.’ That is Russell Marion Nelson. He will never force the human mind.”

“He’s not afraid to do something different,” said the prophet’s wife. “If we’re really preparing the Church and the world for the Second Coming of the Savior, he is sincere about that. He doesn’t want us spending money, time, energy on anything that isn’t really focused on that. It’s pretty stunning.”

The senior Church leaders returned to Church headquarters in Salt Lake City, but Sister Nelson acknowledges this won’t be the last ministry tour for the prophet. “My husband is a global man. … He thinks outside of the box,” she said. “I cannot get him to act his age. … If he is at home he’ll say, ‘It’s wonderful to be home, but I need to be with the people.’”

“This is a global ministry,” said President Nelson. “We’re prophets for the whole world — all of God’s children — not just the members of the Church. … We’ll get around, but we’ll still miss more than we’ll touch, but we’ll try. We won’t give up just because it’s a big job.”

“This is a calling. … It’s the Lord’s work,” concluded President Nelson. “And it’s a privilege for us to participate in it in any way. We love it. It’s very energizing.”