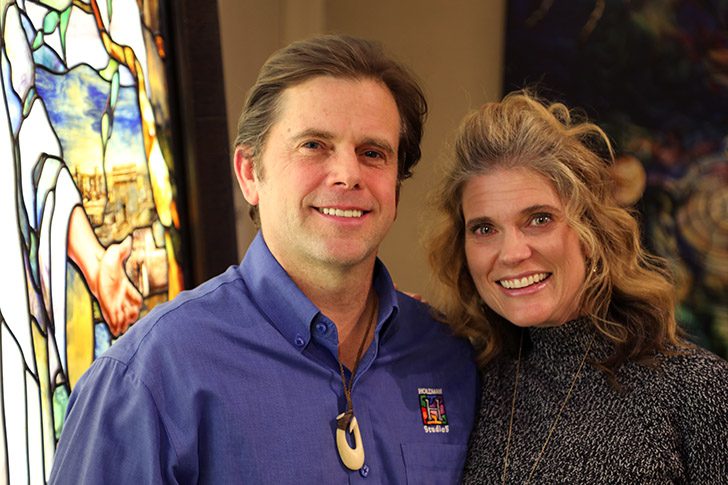 This is the second of several stories from Meridian Magazine offering you in-depth coverage of the Rome Temple dedication, which will be held Sunday, March 10-through Tuesday, March 12.

When President Thomas S. Monson announced in 2008 that a temple would be built in Rome, Italy, the words struck deep into the hearts of Tom and Gayle Holdman and they felt strongly that they wanted to be part of that journey.  They had already created stained glass for historic temples from Palmyra to Nauvoo to Salt Lake City, and now, they hoped, Rome would be the next leg of that journey.

“This is the ancient city where we know Paul and Peter preached, and now we are going to build a temple there,” Tom said. “Could these apostles have hoped for or wished for or seen this temple in vision? I don’t know, but as artists we felt as if the hearts and souls of the first Christians were with us as we constructed the temple stained glass. How do you even begin to explain the depths of our feelings about that?”

When Tom and Gayle attended the temple open house in Rome recently, they had pass along cards to share with visitors.  “We are doing missionary work in the same city where Paul and Peter did missionary work,” they thought.

They are a remarkable team, who have developed the art of stained glass to a world-class level. Very few have taken on the level of projects that they have.

Because Tom sometimes stutters, he was encouraged by his second grade teacher to express himself through art. It was that same stutter that added anxiety to accepting a mission call. Then when his mission president invited him to extend his call a few months, he was worried again and took it to the Lord who answered, “If you stay, I will bless you.” Tom answered, “How will you bless me?”

Tom said the Lord spoke to his very soul, to his very core and answered, “You need to do art glass as your occupation.”

Home from his mission, he started doing stained glass in his parent’s garage, but today in Rome, the home of Michelangelo, Bernini, and DaVinci, Tom and Gayle’s art stands in a temple to our Lord. The Lord had a mission for this talented artist and his wife joined it as they married. They each express their art in different ways. She is a writer and designer. He is an artist. Together they work seamlessly.

In the case of the Holdmans, that invitation has been to impact the entire Church as they have created stained glass for eighty temples filled with tens of thousands of panes. For the Rome temple alone, they created 804 panes, each one a piece of art. This involves many artists who work under their direction at their Lehi, Utah Holdman Studio.

As Church members, we are used to seeing their handiwork on some of our most beautiful temples. When we think of our newer temples, whether we realize it or not, we are also seeing the work, vision, and devotion of the Holdmans.

For the Rome temple, that was eight years worth of work. Though the Payson, Utah temple ultimately has more stained glass panes than any other, the proportion of stained glass to wall is highest in the Rome Temple, what amounts to a breathtaking sight for the viewer, and floor to ceiling stained glass in some places.

To create this level of excellence, it is a meticulous, painstaking, after-hours push for excellence. Why? In part, it is the imagination and vision of both Tom and Gayle, whose work, they say, is their way of expressing their love of the Lord. Walk into their studio office, and immediately you feel like you have entered a pulse of creativity.

Across the walls on four sides are plastered  photos of work they have completed, a window here, an intricate design there.  They have created a $4.5 million Roots of Knowledge window tracing the evolution of knowledge from humanity’s earlier origins for Utah Valley University that sweeps across one long wall with 80 panels and 60,000 panes of glass. This was a twelve-year project involving 40 artists.

Another project of equal magnitude sits in the design stage on the wall.

Yet artistic vision is only part of what drives them, particularly with temples, perhaps the smaller part.  Gayle said, “People go to the temple, and it is the transcendent beauty that people notice first. If they do not know what they are feeling, but know it is something unique, they say they love it and try to explain it. ‘It feels peaceful. It feels lovely’, they say, but they don’t know how to describe it, so they just usually attribute their feeling to the beauty that they see. ‘The windows are pretty. The sculptures are awesome.’ We try to do our very best as artists, but ultimately it isn’t our art that they are feeling. It is just one tiny aspect of this whole that the Spirit is being able to communicate through.”

Tom said, “When we look at the glass in the temple and in the visitor’s center, we knew that the key artists weren’t us. The key artist was above. It was His hand and we were only instruments.”

“To be a part of this is really humbling,” Gayle said.

The theme in the stained glass of the temple is the olive leaf, and interestingly enough, the temple lot once included an olive grove. Most temples today are designed with a nod to the local flora and scenes familiar to the temple patrons, but the olive leaf has a much larger connotation. Yes, the olive tree matters to Italians and others of the Mediterranean who will use this temple, but more importantly it is tied directly to the atonement of the Savior.

Gethsemane, where Christ suffered agony to atone for our sins, means “place of the olive press.” This is a garden where olive oil was actually processed, which in ancient times, meant crushing the olives under the weight of tremendously heavy stones. This crushing again and again of the olive yielded sweet oil, which in turn was a source of healing, light and nourishment for Israel.   Thus, the very garden where Christ performed the atonement was a symbol itself of what he experienced—this crushing and grinding weight upon Him which would yield such a sweet and important result for all of mankind.

Through this crushing atonement, we would be healed, we would find light, we would be nourished. Thus the symbol of the olive leaf could not be more centered in Christ.

The olive leaf is also a symbol of peace and the Spirit. Great lengths were taken to magnify the light and split the rays with beveling and carving of the art glass.

The color palette for the stained glass at the Rome temple is the rainbow, and as the sun shines through, the parts of the temple walls themselves are sometimes prismed with rainbows. Gayle said, “Our job is to reflect the light of God and as we do that, since all of the colors are in that, it reflects that we are all needed, that we are all unique and that we all have a place. We are using the Tuscan version of the rainbow, which is a little more muted.”

Because there is so much glass in the temple, it is very light filled and Gayle said, “I heard people at the open house comment over and over again. ‘There is just so much light here.”

When they were ready to deliver the windows, they counted only 802 out of the 804. Somehow they had missed two of them since 804 were required.  Their talented son, who is a teenaged artist, created the other two, which makes those two all the more special for them.

But there was one more surprise coming when they thought they had the work all done. That story is coming tomorrow.

To make sure you don’t miss it, subscribe to Meridian’s free Newsletter by CLICKING HERE.

Thank you for all these beautiful pictures! We just returned from Rome and the temple open house, but of course we couldn't take our own pictures inside the temple! It is just so beautiful! Thank you many times to the Holdmans for this artistic triumph!

Having recently returned from attending the Rome Temple Open House AND having served my mission there in 1980-81 AND being of 100% Italian decent ... this article brought tears to my eyes! ETERNAL ordinances in the ETERNAL City!!! Thank you for your dedication and sharing your talents, Holdmans!! The Italians are being so richly blessed, thanks to this Sacred House of the Lord!