Original “Home Alone” House Goes Up on AirBnB: When this Christmas Classic was Discussed in General Conference | Meridian Magazine 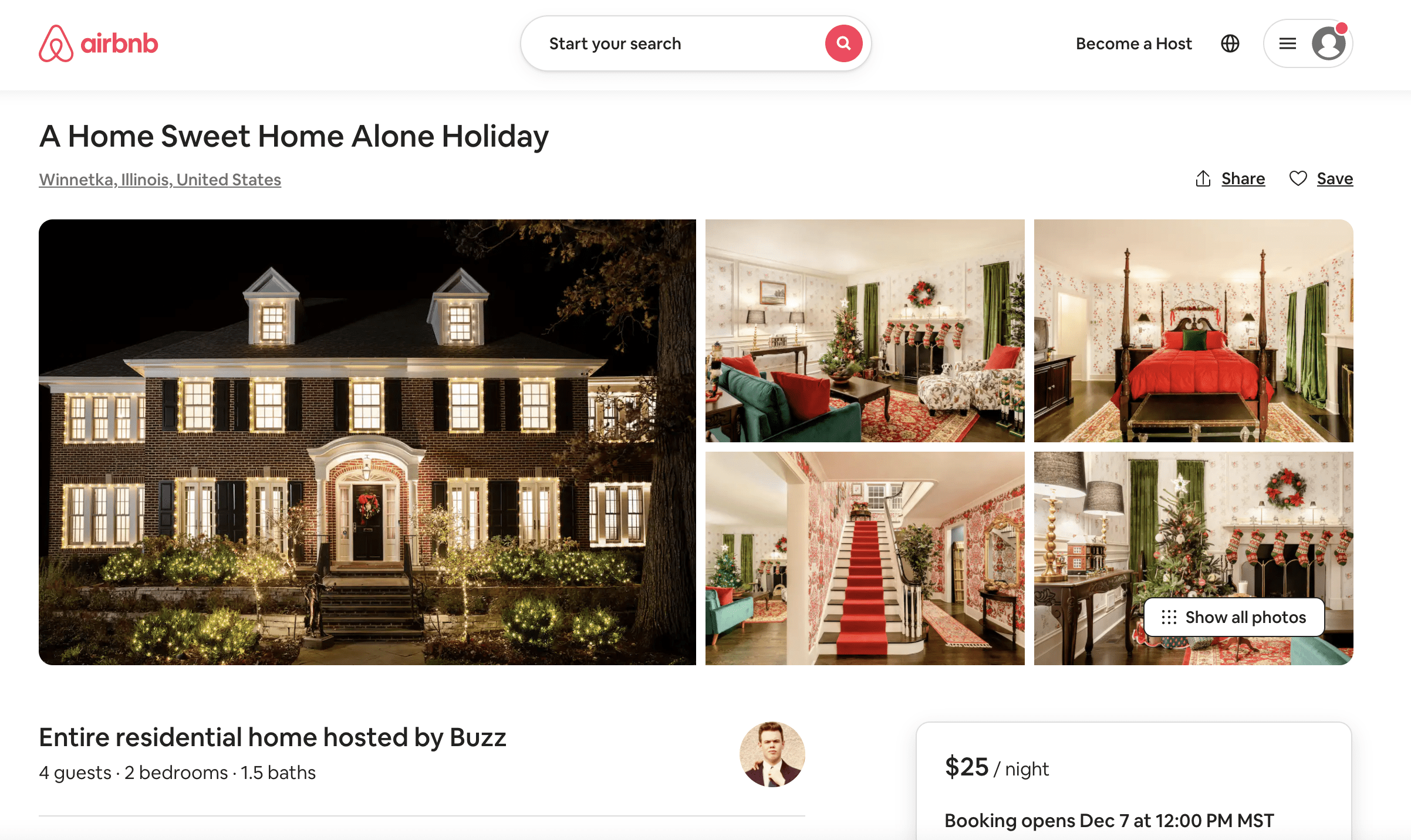 Original “Home Alone” House Goes Up on AirBnB: When this Christmas Classic was Discussed in General Conference

Recently, dozens of news outlets reported on a new AirBnB listing that had everybody talking. The original home used in the 1990 Christmas classic Home Alone was up on AirBnB, decorated as it originally appeared in the movie, and available for someone to book for one night only, hosted by Kevin’s brother Buzz and full of holiday tricks and treats.

According to the description (in Buzz’s voice) “This holiday season, we’re playing by my little bro’s rules, so feel free to eat junk food, watch rubbish on TV, borrow my dad’s aftershave and choose your own adventure with a legendary battle plan as a guide. Just stay out of my room, okay?”

The opportunity to book opens December 7 and is available for one night only, December 12. There will, no doubt, be quite a clamoring for the coveted booking as this film is a classic that has been adored by millions for over thirty years now.

But before it became the holiday staple that it is today, its message moved President Thomas S. Monson, then second counselor in the First Presidency, enough that he talked about the film in general conference just a few months after it first came to theaters in Christmas of 1990. He said,

Children have the capacity for compassion. They have no fear to express their genuine feelings. In the popular movie entitled Home Alone, a scene near the end grips the viewer’s emotions and causes that familiar lump to fill the throat. The scene takes place in a chapel; the time is Christmas; the two lonely characters are seated next to one another on a church bench. The older man, who lives by himself, is estranged from family and bereft of friends. His next-door neighbor, played by McCaulay Culkin, is the lad left “home alone” by his family, which had departed for a European vacation, inadvertently forgetting this one small family member.

The boy asks the lonely man if he has any family. The gentleman explains quietly that he and his son and his son’s family have parted ways and no longer communicate. In the innocence of youth, the boy blurts out the plea, “Why don’t you just call your son and tell him you are sorry and invite him home for Christmas!”

The old man sighs and responds, “I’m too afraid he would say no.” The fear of failure had blocked the ability to express love and to voice an apology.

The viewer is left to wonder concerning the outcome of the conversation, but not for too long. Christmas comes; the boy’s family returns. He is pictured at an upstairs bedroom window looking in the direction of the old man’s sidewalk. Suddenly he views a tender scene as the neighbor welcomes his returning son, his daughter-in-law, and their children. Son embraces father, and the old man buries his head against the shoulder of his precious son. As they turn to walk on, the old neighbor looks upward to the bedroom window of the house next door and sees his small friend observing the private miracle of forgiveness. Their eyes meet, their hands express a gentle greeting of gratitude. “Welcome home” replaces “Home alone.”

One emerges from the theater with moist eyes. As the brightness of day envelops the silent throng, perhaps there are those whose thoughts turn to that man of miracles, that teacher of truth—even the Lord of lords, Jesus Christ. I know my thoughts did.

We don’t know who will get the movie-lover’s dream Christmas getaway night in the McCallister mansion (if I didn’t have a nursing baby, I’d probably be waiting at the computer for the moment the chance to book goes live), but we hope whoever it is takes a moment to look out the window to the neighbor’s house and remember the lesson that Kevin learned from an unlikely source. And the prophet that chose to remind us that we can find examples of forgiveness and compassion in places we never expected.

Thanks for the reminder. It's been a lot of years and I forgot the scene and it being used in President Monson's talk. We all have situations to rectify.